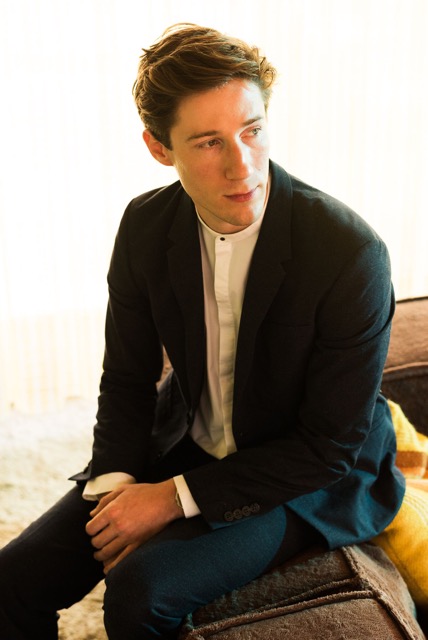 “I Think We Should Take It Fast is a song about a guy going out to get laid, and we thought it would be great to make a music video in which that guy, me, miserably fails to do so,” says Sam of the video. “And I got to pretend to be drunk the entire day which turned out, perhaps worryingly, to be a lot easier than I had thought.”

Both tracks are taken from the Canadian-born, British-schooled musician’s debut album ‘Homotopia’, due March 2018. Produced by Konstantin Gropper (aka Get Well Soon), the album tells the story of a gay man’s world in the 21st century. Smart and theoretically schooled, Vance-Law describes the common homo-stereotypes in order to expose them.

The title alone – ‘I Think We Should Take It Fast’ – hints at the song’s set up: it’s night time, in a bar, a few drinks to the good, Sam has chosen his hookup for the night and is hoping to get him out of the bar. He keeps it honest: “I’m not here to fool myself and I won’t fool you into what I wanna do with you… and maybe the guy behind you too.” A line accompanied by almost hasty sounding drums as well as a piano whose quiet staccato seems to represent a tipsy impatience.

And then, as Sam lets his new friend know that he’ll happily help him on with his coat, the previously minimalist track rises up to a genuine anthem. A marching beat, a bright yet woozy melody and lush vocals convey the feeling that Vance-Law has stumbled out of the bar with exactly one drink too many and one flirt success too few. Eventually, when everything is spinning and he can barely keep his eyes open, he still manages to purr,
“I think we should take it fast” three more times before the song ends abruptly. And though there was never any doubt that this three and a half-minute musical getaway was bound to culminate with Sam lonely and drunk in his own bed, what remains, in the end, is something like a blissful smile.

Sam Vance-Law’s music could comfortably sit alongside the likes of John Grant, The Magnetic Fields and Father John Misty, it’s also unafraid of nodding to – among other forms – theatre, operetta and orchestral pop. Given Vance-Law’s upbringing, perhaps that’s unsurprising.

Born in Edmonton, Canada to an academic mother and journalist father, Vance-Law moved to Oxford at the age of five, where he soon joined the renowned New College Choir, juggling five services a week with violin lessons. After three unhappy years at one of the UK’s most distinguished boarding schools, the family returned to Canada when he was 16. It was here that, especially once he’d begun studying English Literature at university, Vance-Law began to broaden his musical horizons, meeting the likes of Mac
DeMarco, Sean Nicholas Savage and Tops’ David Carrier.

“I spent a lot of time with them and others, playing pool, biking around, working a bunch of different jobs, drinking coffees, drunkenly eating pizza at 3am and going to uni,” says Vance-Law. “That might sound laidback, but I was wholly dedicated and focussed on every one of those things.”

When he was 23, Vance-Law he returned to Europe, and – having first settled in Paris – he visited Berlin, a decision that would prove momentous. “Within 24 hours, I’d decided to move here,” he explains. “The city afforded me the space to figure out what the hell I wanted to do next. And it happened by accident. Someone said the word ‘homotopia’ seemingly at random in a conversation, and me and my friends thought it would be a great name for a record.”

Musically and lyrically, ‘Homotopia’ pulls no punches, the album is as provocative as it is thoughtful and as entertaining as it is warm-hearted. “The album,” he says, “is about putting issues of equality front and centre. About testing audiences and their abilities to relate to the stories, I’m telling. About calling on empathy and compassion as the first
and necessary response to a person and his or her situation, not as a luxury doled out sparingly if and when deemed fit. I look for those moments in music and elsewhere where the way I see the world shifts slightly and for the good.”