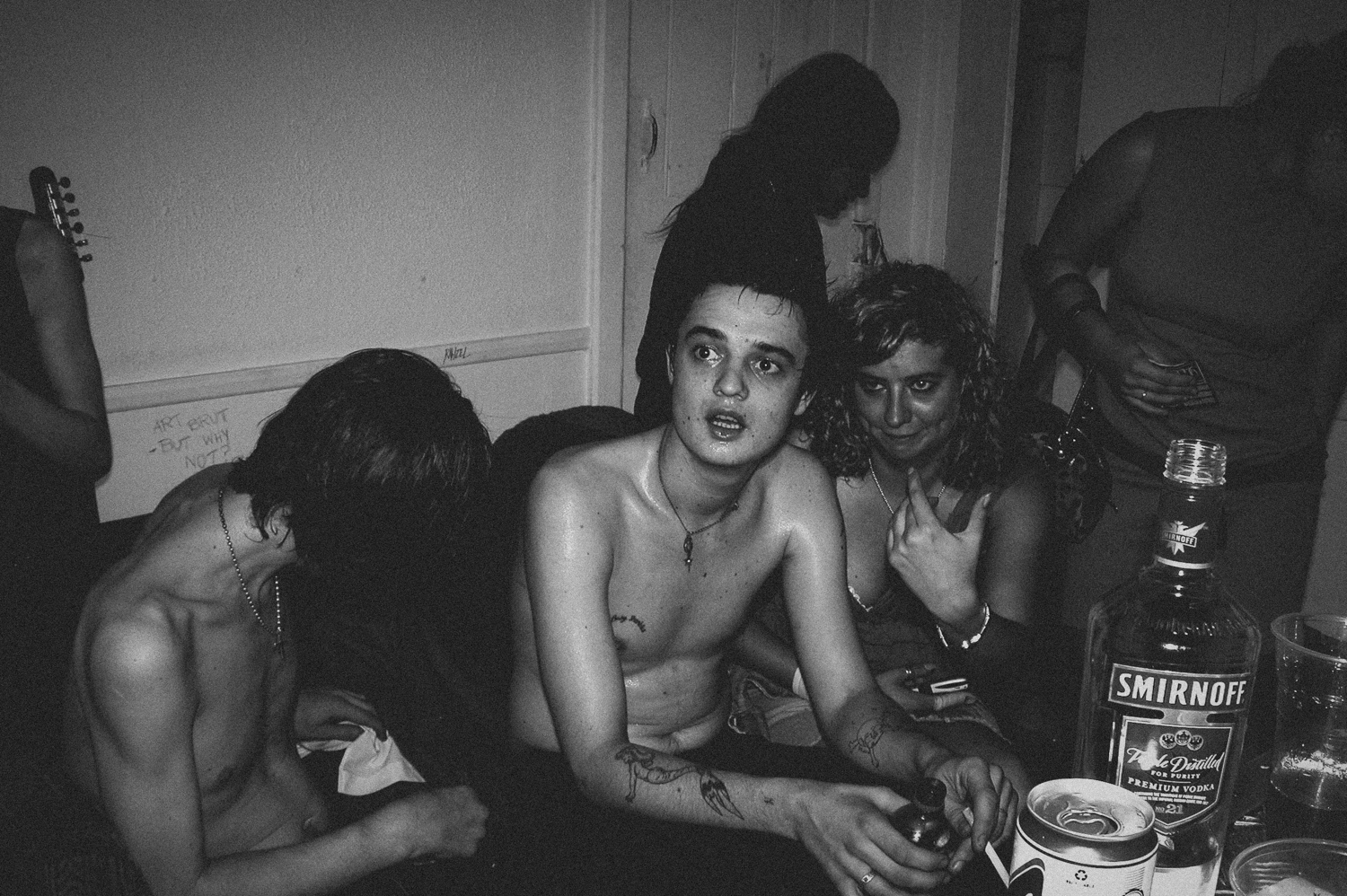 Photographer Gregory Nolan has been snapping the London music scene since the indie peak of the early 00’s, when everybody was in a band, sleeping with a band or wishing they were. Now, ten-something years later, he’s released a book featuring live, backstage and crowd shots under the banner “This Was Our Scene” taken from the centre of guitar music’s last big stand.

Following the release of the book, nodded to online recently by the likes of The Libertines and The Kooks, Nolan is nestling into The Guitarwrist store in London from December 12th for a two week exhibition of his work.

I put some questions to him about the evolution of the live photography landscape:

Q: What prompted you to curate this exhibition in 2017? Do you think there’s been enough time pass from then to now for this to feel good as nostalgia, or is it perhaps that the era feels all the more important now than ever before?

It’s been a slow build in the back of my mind for years. I’ve been hauling this archive around on hard drives, wondering if I actually had captured anything good back in the day. Turns out I deleted 70,000 crap photos right off the bat when I finally got started. Some of it is just the curiosity that I think a lot of creative people feel about unfinished projects. They kind of stick in your mind.

In the bigger picture, there has been a sort of low rumble about this time that’s grown recently. There was a good hashtag, #indieamnesty, going around for a while there. You feel the nostalgia right away if you were there. Then there’s been huge and much-deserved buzz around Meet Me in the Bathroom, about the parallel scene in NY.

Now that the people who were young in those days are hitting the age of being ‘real’ adults, and the world is looking bleak, there’s something comforting about imagining this time both in our lives and in the experience of a cultural moment.

What do you think made it “our scene” back in 2001-2005? This was kind of just before social media really invaded our lives. What joined everything together? Was it NME magazine? Word of mouth? Or just knowing the right club nights to be at.

I’m marking the end of the scene as 2008, when Nambucca burned down and a lot of transitions happened, from small venues closing to the smoking ban.

A lot of being in the scene really was knowing where to be. It felt like we were all living it every single day. A week would revolve around what nights you would go to, and the times you had to be there.

I have some photos I love of cell phones and bulky cameras. We had just enough to start doing increasingly cool stuff with planning nights and sharing snaps on myspace… but our experiences changed drastically once we started living so much on social media. (and not all for the bad–it’s a mixed bag)

I noticed that The Libertines have mentioned your show, and your book contains a few images of them. What were those early Libertines and Babyshambles shows like as a photographer?

I was actually at college in Watford during those early days, and I arrived on the scene just after the Libertines disbanded.

But something that was really special was that I started to really develop as a photographer right at the same time that I became part of that scene. What that meant for me was that many of the artists and promoters (and all the people who make things happen behind the scenes) thought of me as a friend. I learned how to balance photography with comfort and being present, which meant that I sometimes caught some really special or intimate moments, either backstage or sometimes jammed in a corner of the stage, looking for that drummer’s eye view.

A big part of your book is focusing on the people at live shows, and not just the bands – have you noticed any changes in audiences over the years?

I have always loved photographing the whole scope of a show–the musicians, the crew, the venue staff, and the fans. What makes live music so great really is the whole experience, which is about the crowd just as much as it is about the band. Maybe especially in those days, when London crowds would lose their shit for a band that never got much of a listen outside of North London.

There’s a special kind of energy and connection in the crowds from these times. Some of that might be the glow of nostalgia, but I think the fact that no one has a phone in front of their face changes things too. It makes for much more beautiful photos of the front rows for sure.

Since the 00’s scene there’s been a slow and steady decline in guitar bands in the mainstream – has that affected how you work at all. Do you focus on live bands still, or do you shoot DJs and soundsystems as well? Would that be as exciting as a live experience?

I don’t know that many of the bands from that time would have been called mainstream, and I do think there’s a sort of permanent DIY ethic to youth culture and a lot of live music. People come out for the music they love, and that’s a joy to photograph whoever is on stage. I’ve gotten to tour quite a bit in the past few years with guitar bands and with other genres as well.

I haven’t experienced anything like the 00’s scene since those days. But there’s an awful lot of good music around, and it’s still a real privilege to get to participate in it.

Do you think it’s a good or bad thing that more people take live photos now via their phones. Does it enrich the art, or dilute it? Is it a good thing for live music, to be documented so much more now compared to ten years ago, or does it devalue the shows by having such poor quality images out there in the public?

I do think it changes the live experiences. So many concerts now the whole front half of the audience is just a sea of phones recording. I think it’s hard to see that and not have a reaction like people are missing something and aren’t really part of what’s in front of them. But I’m also someone who has always enjoyed adding documentation to my favorite experiences, so I can’t have too much to say about others doing it too.

I’ve been lucky to have started in the time and place I did. Learning to build relationships with bands and venues means that I have access to spaces and angles that no crowd member ever has. I think that really makes the difference–that there are the images that just prove you were there, and then there’s a photo that makes you fall back into that moment. That’s what I’m going for–a bigger connection.

If you could go back to the early 2000’s and re-shoot any show, what would it be?

Semifinalists, Blackwire and The Cribs at Infinity in March 2005… Just amazing.

And finally, do you have any advice for budding photographers?

It’s to build relationships. Show up and start working. Be honest with yourself about your photos. Take the time to work with lighting, angles, composition, and editing. Just keep on taking photos and then really looking at them to try to get better. And you won’t be able to get far if people don’t like working with you. Music is supposed to be fun–each new person around should add to it for everyone. You have to do your job (photography) and also be part of the community, even if that’s just for a few songs at the start of a show.

This Was Our Scene opens at The Guitarwrist from December 12th, featuring images collected from the 00’s indie scene. For more information, or to order the book, visit www.thiswasourscene.com

All images by Gregory Nolan.