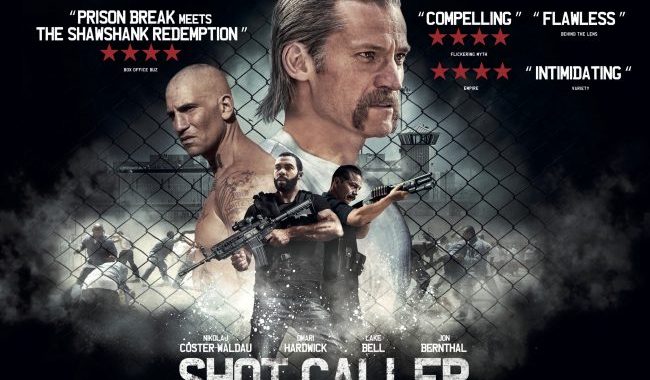 In many ways the new release, Shot Caller is a strong indictment against the legal and penal system in America. The plot takes a regular middle-class family guy and turns him into a ruthless and smart gangster. Of course the plot is somewhat exaggurated, but never the less a fascinating one. The film opens with Jacob Harlan (Nicolaj Coster-Waldau) released from prison after serving a long stretch. He is also tasked to carry out an arms sale and a couple of thousand weapons including hand guns and AK-47s to a former prison associate.

The film proceeds to flash between his release, before he goes to jail and while in prison (we can tell by the length and shape of his facial hair, or lack of it before his internment). Some way in we see the circumstances that led to Jacob Harlan’s arrest, his comfortable homelife with his loving wife (Lake Bell) and son. He is in the financial sector working as a stock-broker ans he is a studying to be an architect. One night the couple are out dining with another couple when on the way home he is momentarily distracted, causing a fatal crash after jumping a red light. Arrested, he now faces up to 7 years in prison for causing a death while DUI (driving under the influence) which he duly receives.

His first experiences in a maximum security prison are harsh and he soon learns to survive by sticking with his own race; not only his own race, but neo-nazis who call themselves the Aryan Brotherhood. He soon grows his hair and gets himself tattooed up, but not going quite as far as the others who are adorned with swastikas and SS flashes. He soon proves himself among his new peers, moving drugs around and stabbing rivals while morphing his own personality and look to adapt and survive. He is eventually released after an extended sentance for stabbing a prison rival and is eventually released, now alienated from his family but is planning a large arms haul.

Without giving too much away, the film doesn’t just follow the normal happy ending or even redemptitve ending that one would expect. Coster-Waldau, best known for playing Jamie Lanister in ‘Game of Thrones’, does an impressive job in transforming from the normal bod of an ordinary guy to the buff tattooed con with the zapata moustache that he becomes. The transformation is something of a stretch but the point is clearly made. In the USA, although the laws do differ from State to State, laws are very strict on drink driving and carry very heavy penalties in tough prisons for felons, as opposed to the more rehabilitative prison systems in Scandanavia.

The action is taut and effective and keeps moving at a quiet but intense pace and has some resemblance to Jacques Audiard’s A Prophet (2009). The direction by Ric Roman keeps the drama tense, although the viewer is asked to accept a little too easily Harlan’s transformation. The film will go down as a sleeper and a minor classic and is an effective kind of prison film and is as tough if not tougher than many of them.