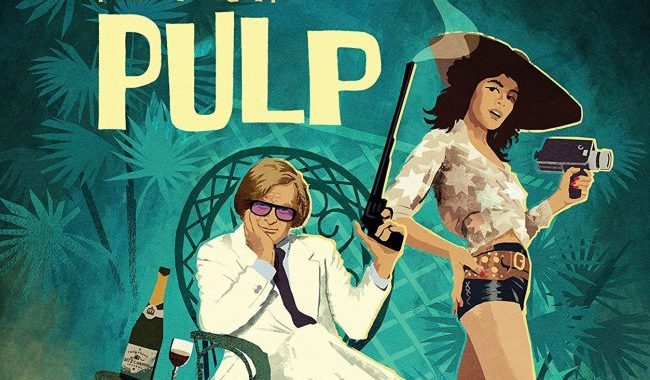 In 1971 Michael Caine and director Mike Hodges collaborated on what became one of the seminal films of both their career’s, as well as one of the seminal films of the 1970s, Get Carter. The following year the pair made Pulp, a very different film and one that is part thriller and part black comedy. It is not as tight or as good a film as Get Carter and is one of Caine’s lesser seen films of the decade.

Pulp is shot entirely on the small island of Malta and stars Caine as Mickey King, a writer of sleazy pulp fiction novels with something of a vivid imagination. In an early scene we hear Caine’s wonderful voice narrating his novel as we see women in a Maltese typing pool typing up his novel, a sleazy crime novel called ‘My Gun is Long’. The look of excited shock on their faces as they type up the jucier scenes is funny while the loud clatter of the typeing punctuates King’s narration. He travels around the island after being invited to ghostwrite for an as yet mystery well known personality. After a bus journey King arrives at a hotel where he is contacted by a man called Miller (Al Lettieri). King is mistrustful of Miller and that night he finds Miller has been murdered in his bath tub. Inexplicably he also discovers that Miller was a transvestite.

Finally he is introduced to his mysterious employer, a retired celebrity and eccentric movie star, Preston Gilbert (in a lively performance by a lively actor – Mickey Rooney) whom he is asked to shadow; an actor apparently best known for his gangster roles. Gilbert is dying of cancer and wants King to immortalize his life and career. However, another problem persists in that King seems to be a target for an unknown gunman, the person who had killed Miller who intended the bullet for King himself.

On the Arrow Video release Pulp has a good look to it. Shot entirely on location by Osuama Rawi the film has an overriding deliberate domination of brown, beige and tope shades in which clothes, buildings, vehicles and even typewriters are brown in colour or tone. One thing that could be said the film, is that it is original with a very interesting cast that includes former film noir actress Lizabeth Scott appearing in her last role and Lionel Stander, the gravel voiced actor who often played by tough gangsters (nearly also with a seeming sense of irony); he had previously appeared as the tough guy in Roman Polanski’s Cul-de-Sac (1966).

The film is  a neo-noir comedy thriller, but not immediately obvious on any score. Of course in both name and profession Caine’s character is referencing Mickey Spillane. It is left ambiguous in the film as to whether Mickey King is imagining everything through his vivid imagination. When he leaves the typeing pool and is standing on the street, a cabs run into the back of another, while a lorry strikes the doors of the striking taxi. It has an almost dreamlike quality about it. In another scene, a parade by a far-right politician takes place. It all seems very Buñuelian.