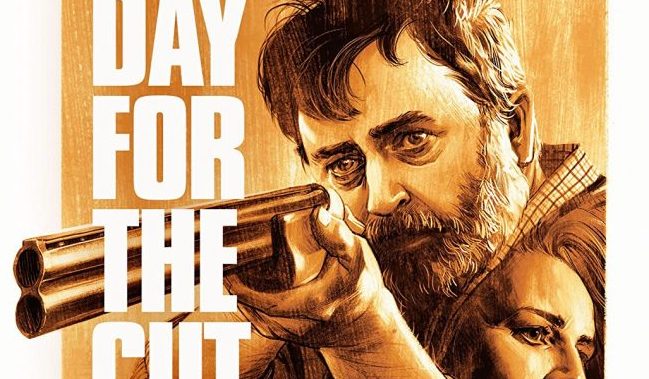 Bad Day for the Cut is a relatively small film from Chris Baugh, a director with limited experience beyond some short films and a writer and director more at home with children’s television shows. This is his first feature and deals with some very adult material (and language) that doesn’t hold back on its violence. The film starts off slowly with a middle-aged farmer, Donal (Nigel O’Neill) who lives on the isolated farm with his mother, Florence (Stella McCusker). His life is very routine, spent working on the farm, drinking down the pub (with the occasional stand off with young hot heads) and shooting. After a while the feeling is that this is going to be some sort of Straw Dogs type of drama.

One day Donal awoken to find that his mother has been murdered in an apparent disturbed bugulary, with her head smashed by a sideboard clock. After the police arrive and find clues to who it could have been limited he decides to do some sniffing around himself. In a barn he is assaulted by two men who are out to kill him. He kills one of his tormentor’s and overpowers the other. The man he is now holding at the point of a gun is a young Polish man, (Józef Pawlowski) who pleads for his life and claims that he was forced to carry out the act of killing the farmer as a gang have forced his sister into prostitution. He is led to believe that this was a murder connected to a secret from his apparent quiet mother’s past. Searching through her things he finds an old photo under the bed that he thinks holds a clue. Rather than phone the police he goes off in his newly restored camper van and makes his way to a family member’s home to be told by him that the young girl in the photo is the daughter (Susan Lynch) of an IRA commander who due to a withheld secret wants revenge.

The film sshifts gear at this stage and becomes a violent revenge film with Donal, a man who previous to this life seems to have passed him by to become a Clint Eastwood style avenger. It all seems rather effortless, while Lynch’s Frankie Pearce is a rather nasty piece of work who is also a loving mother with a strong sense of belief in family. Despite a fairly standard storyline, director Baugh has done a good job with what is clearly a limited budget, while cinematographer, Ryan Kernaghan gives mood to the locations in the film, whether it’s the countryside, suburbia or Belfast locations. A success at the Sundance Film Festival, the film is released on Kaleidoscope Home Entertainment, the only extra on the disc is a Making Of documentary.