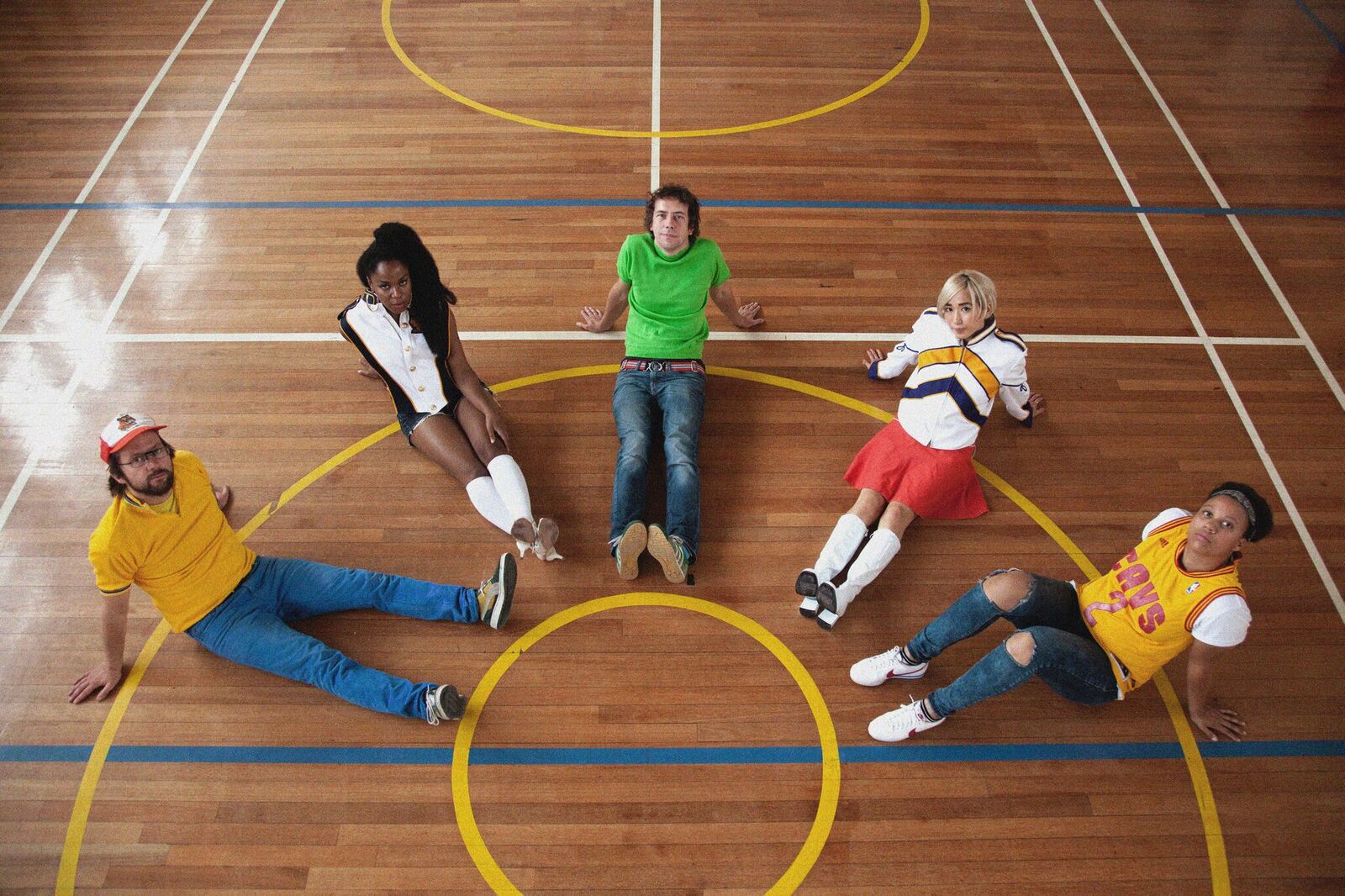 *The Go! Team* will release their new album */SEMICIRCLE/* on *19th January 2018* through Memphis Industries and today they share a new single in the form of “All The Live”; an old-school breakbeat/hip hop triumph featuring a genius sample from an early 80’s after-school rap club.

Bandleader *Ian Parton*: /”All the Way Live is just an all out brass attack set to some pretty cheeky rapping. Lots of the voices are sampled from a record made as a kinda after school hip hop project by students of Carver Senior High, Chicago in 1983. We managed to track down the teacher behind the project – Mr. Harris to clear it. It wasn’t really the fact it was old skool that attracted me but the personality and cheekiness that was jumping off the vinyl. It’s always about personality over perfection for me…”

It was premiered by KCRW, who said: /“To listen to “All the Way Live” is to feel the immediate rush of joy that comes with knowing you’re experiencing peak Go! Team. “All the Way Live” is a song on a mission, and that mission is to ensure you’re getting EVERYTHING you could possibly want from a Go! Team track.”/

“All The Way Live” follows “Semicircle Song” – which is currently on the *BBC Radio 6 Music A-List* – in being lifted from /SEMICIRCLE/, named as one of Stereogum’s /Most Anticipated Records of 2018/.

Unlike 2015’s */The Scene Between/* – which was essentially a solo project that followed the dissolution of the previous Go! Team lineup – */SEMICIRCLE/* finds Parton collaborating with current live players *Simone Odaranile* (drums) and *Angela ‘Maki’ Won-Yin Mak* (vocals), as well as two original members, guitarist *Sam Dook* and rapper *Ninja*. *Annelotte de Graaf* (aka *Amber Arcades*), previous collaborator *Julie Margat* (aka *Lispector*) and a crew of unexpected musicians feature throughout.

In keeping with the album’s marching band theme, Ian stacked up sousaphones, glockenspiels and steel drums, mic’ing them all from a distance to recreate that gymnasium sound. The effect is a kaleidoscopic cacophony, almost as if the sound itself is bent and refracted in the metallic curves of a trumpet; comforting and intoxicating at the same time.

Ian is keen to emphasise that the vibrant utopia he and his cohorts have conjured up on their fifth album is not an escapist fantasy but a potentially achievable goal. /“It’s about reminding yourself of the good things in life,”/ he says. /“We don’t want to be dumbly optimistic and say, ‘Hey, isn’t everything great!’ but there’s something to be said for just getting on with it, for getting organised and not letting the fuckers get you down. Party for your right to fight!”/

*The Go! Team **/SEMICIRCLE /**tracklisting*
Mayday
Chain Link Fence
Semicircle Song
Hey!
The Answer’s No – Now What’s the Question?
Chico’s Radical Decade
All the Way Live
If There’s One Thing You Should Know
Tangerine / Satsuma / Clementine
She’s Got Guns
Plans are Like a Dream U Organise
Getting Back Up

*The Go! Team* recently announced a *UK and EU headline tour for February 2018*, which includes headline shows at *Electric Ballroom*, *London* (15th) and *Gorilla*, *Manchester* (17th). The band have also just confirmed an in-store tour to coincide with the release of /SEMICIRCLE/.