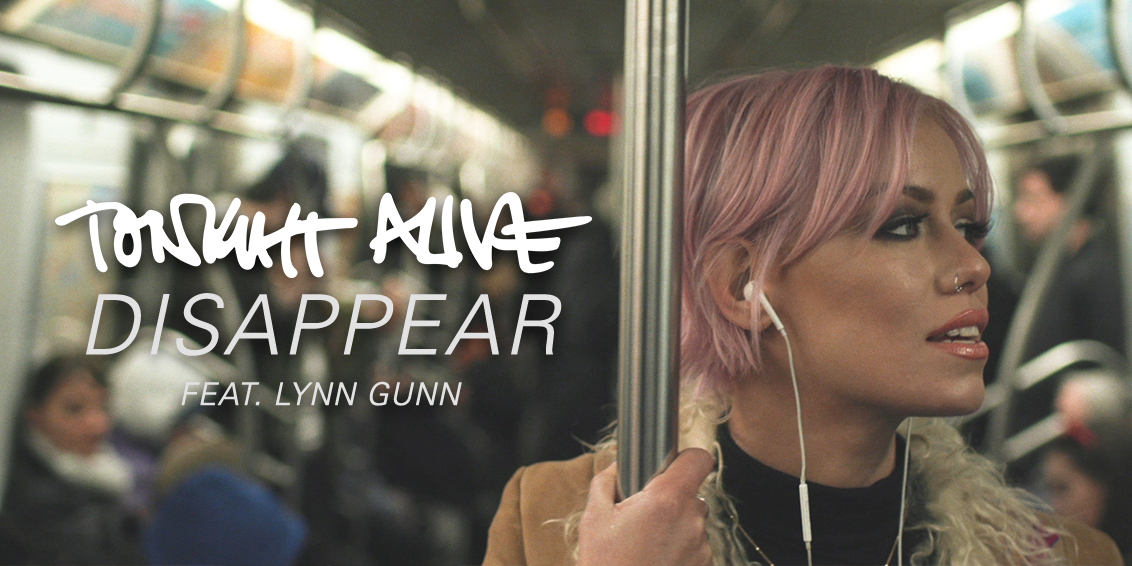 TONIGHT ALIVE is celebrating the release of the music video for their latest single “Disappear” today. The super-charged track features Lynn Gunn (PVRIS) and is the third single from their upcoming album Underworld. On the track and collaboration, singer Jenna McDougall shares “Disappear is a song about the escapist inside all of us. As you can expect from TONIGHT ALIVE, the lyrics discuss freedom, but this time with a flavour of anonymity and detachment. Disappear was written with the intention of sounding neither like Pvris or Tonight Alive and aimed to capture the sonic imagery of a long straight highway out of your comfort zone.”

Musically, the upcoming album gives fans unique melodies and heavy hitting rock sounds. Lyrically, it is the most personal work they have ever put forth. It is full of moments that pushed the band to explore every aspect of themselves both creatively and emotionally. Due out January 12th, 2018 via Hopeless Records.

“Disappear” premiered yesterday as Annie Mac’s Hottest Record on BBC Radio 1 and joins previously released videos for “Crack My Heart” and “Temple,” both of which have been seeing incredible streaming success with adds to Spotify’s Rock This, The Scene, Pop Punk’s Not Dead and Crash Course Playlists in the US, coveted New Music Friday adds in Thailand and Italy as well as spots on iTunes’ Best of the Week and A-List: Rock Playlists in the UK.

TONIGHT ALIVE will be returning to the United States for a Co-Headlining Tour with Silverstein later this month to perform these tracks live for the first time. With support from Broadside and Picturesque, The Get Free Tour will kick off in Cleveland, OH on January 19th and travel to cities all around the United States before wrapping up on March 1st in Pittsburgh, PA.

The band also recently announced a special run of U.S. acoustic in-stores and signings happening on the East Coast later this month. Fans who pre-order the album directly from the store will receive guaranteed entry to the acoustic set and signing. Limited space is available. The participating stores include F.Y.E. in Hanover, MA, Looney Tunes in West Babylon, NY, Vintage Vinyl in Fords, NJ and Sound Garden in Baltimore, MD.

TONIGHT ALIVE, the now 4 piece since the departure of guitarist & writer Whakaio Taahi is composed of vocalist Jenna McDougall, rhythm guitarist Jake Hardy, bassist Cameron Adler and drummer Matt Best. After self-releasing the EPs All Shapes & Disguises and Consider This in 2010, Tonight Alive released What Are You So Scared Of? in 2011/2012. In 2013 the band released The Other Side. The band also contributed the song “The Edge” to The Amazing Spider-Man 2 Soundtrack before releasing their third full-length album, Limitless in 2016.