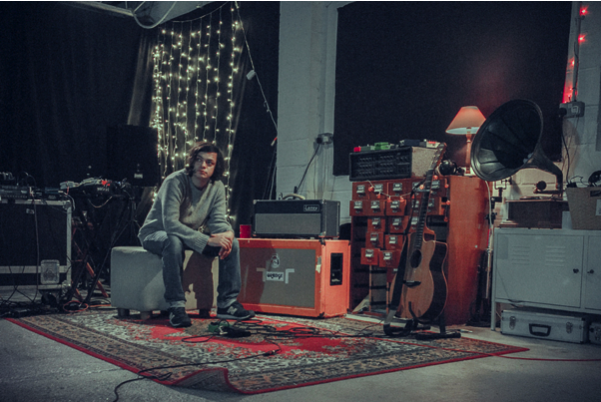 Counting down the days until the imminent release of his new album ‘Young Adult’, GET CAPE. WEAR CAPE. FLY. breaks into 2018 with a jubilant new single: “VHS Forever”.

Receiving its radio debut on BBC 6Music with repeated spins across the Shaun Keavney, Radcliffe & Maconie and Steve Lamacq shows, ‘VHS Forever’ is the latest single from the recently revived alias of Sam Duckworth.

Ignited by an irresistible three-chord riff, this retro-futuristic bottle rocket of fizzing synthesisers and beatific brass is just one of many stratospheric highs to be found on the first Get Cape. Wear Cape. Fly album in four years.

A treasure trove of golden couplets and diamond one-liners, “VHS Forever” sees Duckworth offering his unique perspective on the sheer nuttiness of consumer trends in the here and now. He says:

“VHS Forever is probably the most absurd of the songs on the album. It’s a little bit of fun really. So much of the music that I’ve made previously has been quite heavy and quite political. I just wanted to write a song that highlighted the ridiculousness of feeling like all eras are being relived and rehashed at once, perpetual nostalgia. With one foot in pub rock (especially DR Feelgood) and another in Britpop, I wanted to write a 3 chord pub rock song that was fun and didn’t take itself too seriously.

For me, it’s odd because now I’m 31 years old, and the fashion of the current age looks exactly the same as the fashion of the age when I was growing up. Being an artist that’s been around for a long time a lot of people say to me: ‘I used to remember you from my primary school’ and I just think, well I’m talking to adults who remember me from their childhood, when in some ways I still feel like I’m still a child myself. [In ‘VHS Forever’] I’m just trying to wrap it all up into a nice little bubble in a way that doesn’t feel too heavy.”

Get Cape. Wear Cape. Fly. will release his highly anticipated new album ‘Young Adult’ on 19th January 2018 on Xtra Mile Recordings. New single ‘VHS Forever’ sits alongside formerly released tracks “Adults”, “Always”, “Just A Phase”, and “DNA”, all of which are all available to watch/listen to now, ahead of the full album release this month.

Plus, to mark the release Sam Duckworth, plus a full band (the same band as featured in the ‘VHS Forever’ video will be launching the new album with an unmissable one-off live performance at The Village Underground, London on 18th January 2018.