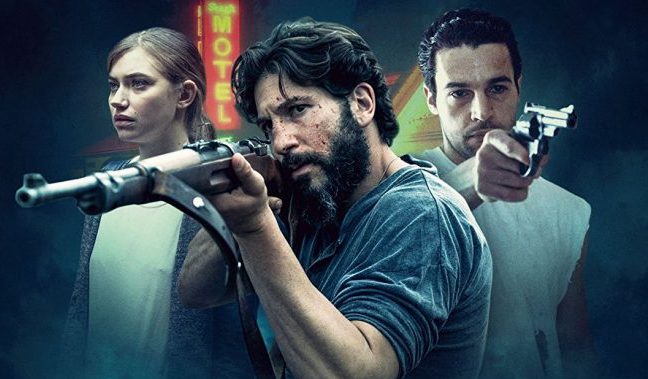 Sweet Virginia (2017), a new film out on Kaleidoscope is a moody and atmospheric neo-noir film that has seen only a limited release. It’s pace is deliberately slow, but this only adds to the noirish feel to the film. Unfortunate therefore that it’s not seen a broader release, mostly showing at film festivals, including at the Edinburgh International Film Festival in the UK. It is a film withsome good suspense, aided by Will and Brooke Blair’s moody and suspenseful score and, while not altogether original it does draw the viewer in.

Presumably set in the US but filmed in British Columbia, Canada, the film opens with a gunman walking into a late night bar and shooting men drinking dead in there. We soon learn that the shooter is a hired hitman named Elwood (Christopher Abbott) who has been hired by the wife (Imogen Poots) of one of the victims, sick of his philandering as she relays to him. She was also shocked that he killed others to which he countered her. Naturally, he demands payment for which she says she’ll pay next week when her dead husband’s money comes in. In the meantime he takes a room in a motel run by Sam (John Bernthal), a retired rodeo star. Elwood recognises the man and the pair develop an uneasy friendship.

In his own life Sam is battling his own issues, his sense of direction and where he is in relationships. Over the course of the next few days the small town experiences a number of violent episodes, always with Elwood seeming at the heart of it as he lashes out at strangers. Lila, the widow of the murdered man starts to become worried that she won’t be able to pay the hitman when she learns that her dead husband was bankrupt and now fears for own life and safety.

It would be no broad statement or cliche to call this film noirish in that it is shot either nocturnally or in the dawn light, giving the film an added moodiness. Only the second feature by director James M. Dagg (his first was the small film River in 2015), he shows a maturity and ability to effortlessly build tension and suspense. The plot has some surprises, not least of all Poots as the girl next door, who we come to understand has gotten to such a point that she wants her husband dead. But it is the use of Abbott and Bernthal who deliver the surprises, with Abbott’s coolly psychopathic, yet still understated performance, while, Bernthal, Netflix’s own ‘Punisher’ is this time playing a much more down to earth character and in many ways the lynchpin to the story in the end.

Thankfully the film is not over the top and this quietness with a below the surface seething violence works well for the film and draws the viewer in. It’d be interesting to see what film Dagg can pull out of the bag in th future. The only extra on the disc is a trailer.