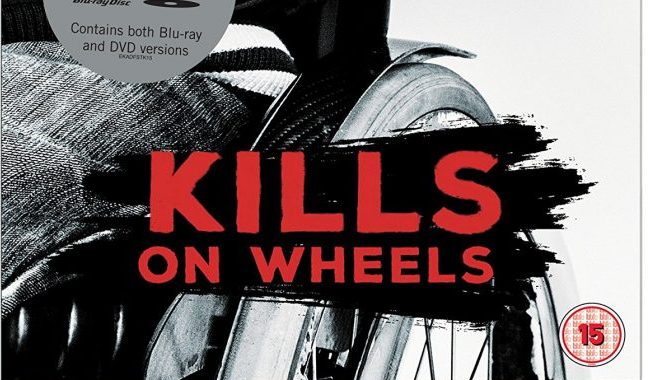 A new film from Hungary, Kills on Wheels (2017) central characters or protagonists are paraplegics. As a comedy thriller this could so easily have gone wrong and be seen as distrasteful in the Farrelly Brothers sense. In an unusual twist in portraying disabled people it demonstrates the difficulties and advantages of being disabled in committing crimes.

The plot focuses on three individuals who become acquainted in the care centre they attend and receive treatment and physiotherapy. A new arrival is Rupaszov (Szabolcs Thuniczy), a former fireman who was injured in a workplace accident some years before who has turned to becoming a hitman for hire. He bonds with two other younger men there, bonding over their interest in graphic art. One is Zoli (Zoltan Fenyvesi), who is paraplegic with a distorted spine. His mother is trying to raise money for an operation in Germany to correct his spine. The other is Barba (Adam Fekete), a talented graphic artist.

One day Rupaszov is hired by a Serbian gangster, Rados (Dušan Vitanović) to carry out a hit after he has been targeted by a rival gang. Rados surrounds himself woth rottweilers and hires Rupaszov after he is wounded to carry out a couple of the hits on his behalf. He believes that a crippled man would be the least likely suspect when the hit is carried out in public. It’s not long before Zoli and Barba are drawn into this seedy world which may also become an exciting escape against the enuii of their lives.

Released by Eureka Entertainment through Montage Pictures, this film comes to Blu-ray not long after its limited theatrical release. Of course films about a disability and how the protagonists overcome it have regularly proven to be strong and popular dramas. Wheelchair users have been less portrayed and when they are it is usually in the context of war, as in The Men (1950), Coming Home (1978), Born on the 4th July (1989) or even Forrest Gump (1994). Kills on Wheels is nothing like these films, but has a closer relationship to The Raging Moon (1971) starring Malcolm McDowell and Nanette Newman as a pair of wheelchair users who find love while institutionalised in a care home. In Kills on Wheels iRupaszov uses his new found skills to overcome his issues and gain a lucrative income, finding a new release for his disability in the process. When he assassinates a man in a public square, in the following panic and confusion he is the last person anyone expects. Later too, when he tries to escape from Rados’s house he finds his disability prevents him from climbing over the front gate, something an able bodied person would probably be able to.

The Hungarian original title for the film is Tiszta Szívvel. This mean Pure Heart in Magyar, a rather curious title given the characters on the film, none of them really having a pure heart to speak of as such. This is only the second feature for the films director, Atilla Tills and he demonstrates someone with a potentially interesting career ahead of him. Having said this, the plot has many elements that don’t necessarily gel with a few unanswered questions in the plot. Tills has worked as a volunteer for disabled people when he was younger, so at least brings some knowledge and experience to the film. While Thuniczy who plays Rupaszov is able bodied, the actors who play and Zoli and Barba are disabled, as are the others in the care home. It is an interesting film that picks up after the first half hour or so.