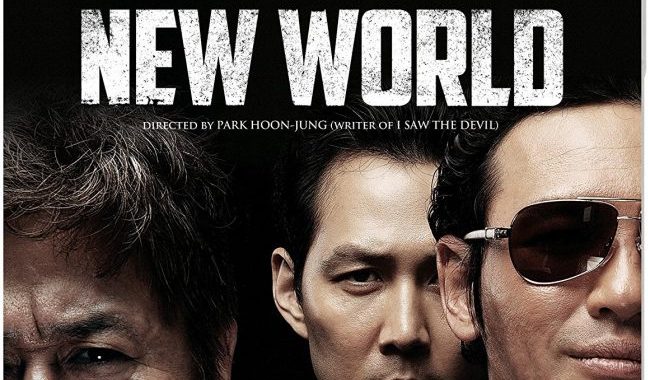 New World (2013) is the 2nd recent release of a Park Hoon-jung film on Eureka! Entertainment, following on from another recent release, The Tiger: An Old Hunter’s Tale (2015). Made before The Tiger, New World (like the other film) did not see a broad release in the UK beyond the Film Festival circuit. On seeing both of these films, this comes as something of a surprise and is a new director to look from South Korea. Also surprising is that Hoon-jung has only directed 4 films and provided the script for a couple of others (with the more recent V.I.P (2017) yet to be seen in the UK). He is, judging from the less than a handful films he has made a director of style and beauty, both New World and The Tiger very sharp and benefitting from the Blu-ray transfer.

Released through Eureka! on their new sub-label, Montage Pictures, showcasing new and upcoming international filmmakers, New World is a good old gangster film. It has elements of The Godfather, with that films style, sweep and sumptuous music, as well as something of the tradition of Japanese Yakuza films, but generally better. The story follows along a well trodden path about an undercover that is so deep, he begins to be confused as to where his loyalties lie. Predecessors include Serpico (1973), New Jack City (1991), Donnie Brasco (1997), In too Deep (1999), The Departed (2006) and Infernal Affairs (2002) among many other such films. New World, Lee Jung-jae (Lee Ja-sung) is an undercover cop who has gone deep undercover to investigate a mafia style organization, Goldmoon International. The organization’s boss has recently been mysteriously killed when hit by a truck. The crime lord successors are between Chung Jung (Hwang Jun-min), Lee Joong-gu, and Jang Su-ki. But it is the ruthless, violent and emotionally unstable Chung who wins the day. Lee’s only connection to the force is his chief, the unorthodox Chief Kang (Choi Min-sik, best known as the star of Old Boy, 2002), whom he meets in secret. Chung begins to consolidate his power and brutally kills off two assosciates who he discovers are undercover cops. Lee, so long working undercover, becomes confused as to where his loyalties lie, while Chung begins to suspect Lee is a cop too.

Like Infernal Affairs before it, New World should appeal to an audience not normally viewers of foreign language cinema, even if its for the violence. One thing that could also be said about the film is that it doesn’t really gel that should be any loyalty or brotherly love between Chung and Lee Jung-Jae, given Chung’s sadistic behaviour and childlike temperament. The violence is well orchestrated, not least of all the mass brawl with clubs and hammers in an underground car park or the torture scene when Chun uncovers the cops in the gang.

Word is that Sony Pictures have already bought the rights to this film intended for Hollywood treatment. Let’s hope they make a better job of it than was made of the Hollywood version of Old Boy. Other than the extra and a fantastic 1080p presentation there are no extras.