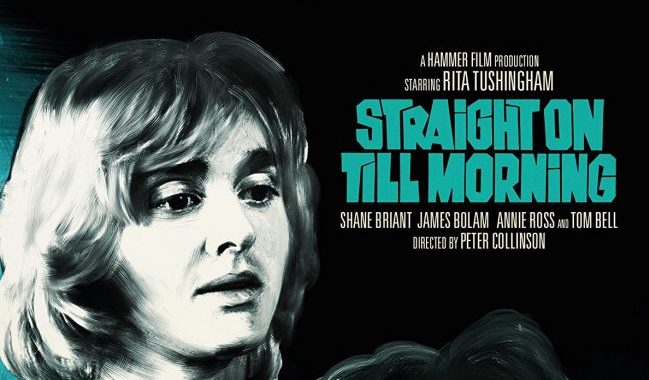 Straight on Till Morning (1972) Blu-ray Review

Straight on till Morning (1972) is a return to the psychological thriller for Hammer. In the early 1970s Hammer Studios felt it had more independence and severed ties with its American backing studios such as Warner Brothers, MGM and even the studio’s American equivalent AIP. It was searching for a new direction and its efforts were patchy at best. Hammer had previously made something of a name for itself with such sub-genre psychological thrillers as A Taste of Fear (1961), Paranoiac (1963), Nightmare (1964) and Fanatic (1965, released in the USA as Die! Die! My Darling). Released as a double bill with another thriller from Hammer, Fear in the Night, for all its faults, of which there are many, Straight on till Morning is a brave and interesting effort.

This thriller (the title coming from a line in J.M. Barrie’s ‘Peter Pan’) is interestingly cast with a couple of outstanding performances. It stars established actress Rita Tushingham who had made a name for herself in the kitchen sink drama based off Shelagh Delaney’s play, A Taste of Honey (1961). Here she plays Brenda, a naive and wide-eyed girl who leaves her mother in Liverpool to venture to the big city of London for work, meet her Prince Charming and have a baby. She arrives in Earl’s Court and soon gets work in a trendy King’s Road type of boutique. There she meets the sexy Caroline (Katya Wyeth) who rents a room in her flat to her. Timid, Brenda attends a party at the flat where she comes into contact with Caroline’s boyfriend, the predatorial owner of the boutique (played by a groovy Tom Bell) and another innocent from the North (James Bolam of ‘The Likely Lads’) who she is attracted to, but is taken by Caroline. Upset, Brenda leaves the party and wanders around the South Bank at night (a long way from Earls Court). She spies a handsome young man with a dog and kidnaps the dog, only to return it to the man the next day.

The young man is Peter (Shane Briant), a strange and angelic looking young man who lives alone in a nice West London mews house. He soon asks her to move in with him which she agrees to. We have already learnt, unbeknownst to Brenda, that Peter is a deeply disturbed young man who has already murdered a couple of other lonely women and has a stash of money from them. Peter and Brenda become close; she thinks she has found the father of her child and he is attracted to her because she is not pretty – he has already murdered the dog because she had prettified Tinker. He tries to keep her under his wing while other’s, including her mother and Caroline look for her.

The casting of Tushingham and Briant is first rate. Briant was becoming something of a name in Hammer films and this was his opportunity to shine which he seems to have relished. In 1972 alone he appeared in two other films for the studio – Demons of the Mind (also released in this series of releases by Studiocanal) and Captain Kronos – Vampire Hunter. He would also later appear as the Baron’s assistant in Frankenstein and the Monster From Hell (1974). He has the look of a fallen angel. His odd, androgynous and angelic features also served him well in Demons of the Mind.  The best scene between the pair is when they’re creating a fairy-story, something they both seem to enjoy together, Peter tells a fairy tale he has made up to Brenda, but he is romanticising a murder he has committed and is in a sense confessing. This is also nicely shot and edited by director Peter Collinson. In between the story Peter is telling, edited into the scene, we see the murder of a widow Peter has carried out.

Peter Collinson is an interesting choice of director. Previously he had directed the cult classic, The Italian Job (1969) and a not bad early slasher thriller, Fright (1971), starring Judy Geeson as a stalked babysitter. His directorial style is very flashy and doesn’t always work that well. There is also some flash editing, that will move from a gentle jazz score (by Roland Shaw) to a more frenetic one in scenes with shops and ‘swinging’ London. But there are also some good close-ups on the actors highlighting the strong acting. The modern look of the film is very untypical of Hammer too, with its opening scenes set in Liverpool and (apart from Briant) its use of non-regular Hammer actors. Never the less, this modern hip crowd is also a similar milieu to those in the studio’s Dracula AD 1972 in which more traditional Hammer characters are transposed to swinging Chelsea. The overall style of the film though does more closely resemble that of an Italian giallo thriller which were being made in great numbers in the early 1970s. But it also resembles a spate of British thrillers made in recent years, such as the brilliant and at the time controversial Peeping Tom (1959), Twisted Nerve (1968) and Hitchcock’s last masterpiece, Frenzy (1972).

As with the other 7 Hammer films released by Studiocanal dating from the early 1970s, Straight on till Morning comes with an approximate 15 minute documentary on the film with commentaries by the likes of Jonathan Rigby and Kevin Lyons among others. On the Blu-ray the colours come out well against the grainy picture.