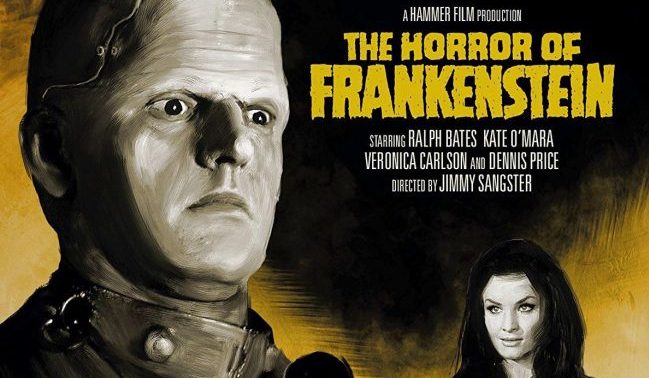 The Horror of Frankenstein (1970) Blu-ray Review

There is a sense that in the early 1970s Hammer Studios were free of their senior backers and distributors in Hollywood, Warner Brothers and MGM. This gave the studio the opportunity to try something new or set out in new directions. TIn the 1960s the themes rarely went beyond the usual gothic stye the studio is best known for. The results were often hit and miss with very mixed results. The 8 films recently released by Studiocanal are testament to this, the 4 released at the end of last October and the next four out on 29th January.Made in 1970, The Horror of Frankenstein was the first (along with the other film released as a double bill, Scars of Dracula) to be released for the first time through a British company, EMI.

Hammer studio producer Michael Carreras approached a regular writer, Jimmy Sangster to write a new screenplay or re-boot of the original Frankenstein story, as he had done with the first successful Hammer film that started the whole cycle, The Curse of Frankenstein (1957). Sangster initially refused, but when he was also offered to produce and direct he was then happy to take it on. However, this lack of any other oversight became part of the problem and the result is a part comedy that seems to be mocking the Hammer films that went before; when Mel Brooks did this with Young Frankenstein (1974), the result was a much funnier film that had more respect for its source material.

The plot of The Horror of Frankenstein (although on its original release the article of ‘The’ is dropped) sticks faithfully to the original story in its basic script. We first see a young Victor Frankenstein (played by Hammer newcomer Ralph Bates) at school, constantly challenging his professor (James Cossins) to the point of giving him a heart attack. He has friends at school in Ingolstadt but he is focused on his studies. Years later, when his father dies (by Victor’s own hand), the new Baron Frankenstein returns to the castle. He comes into contact again with former pupils, one of whom has become a local police lieutenant (Jon Finch) who shows a dislike for the Baron. The Baron also takes on his father’s old mistress (Kate O’Mara) as his housekeeper and as his own mistress. Secretly Victor is carrying out experiments with one of his old friend’s from school and university, but his close friend Wilhelm (Graham James) has deep misgivings as to the nature of Victor’s work in regenerating dead tissue and so kills him off too. The Baron also hires the services of a gravedigger (Dennis Price in a star turn) to provide him with ‘material’. When his creation is literally put together like a biological jigsaw puzzle (with the ubiquitous damaged brain), naturally the creature (Dave Prowse) goes on a killing spree around the countryside.

The comedic elements in The Horror of Frankenstein work in parts, while elsewhere it is less successful. Most notorious is the galvanisation scene where the Baron drives an electrical current through a severed arm that raises and gives a two fingered V-sign (apparently in US prints this was a middle finger). This, and at other moments Hammer were heading more towards Carry On territory than ths studio’s usual gothic horror (Carry On themselves arguably did this better with Carry On Screaming, 1966). Other elements work well or, at the very least are better. Bates as the Baron appeared in 5 Hammer films in a 2 year period, of which this was the second. He seems to be having a good deal of fun with the role, playing the Baron with an almost tongue-in-cheek arrogance, not to mention as a sociopathic psychopath. Dennis Price too, who had made a whole career of playing cads, was now playing cameo roles in many a horror film at the tail end of his career. This is a delightful comic turn as the proper spoken and caddish gravedigger. The wit with which he delivers his lines are by far the funniest part of the film and are reminscent of those of Ernest Thesiger’s Dr. Pretorius in Bride of Frankenstein (1935). Less can be said of Veronica Carlson who acts in the heroine role. She proved herself as an actress with substance in some of her previous films for Hammer, but sadly has less to do here. The late Kate O’Mara too seems to be a Bavarian peasant girl with a strong West Country accent. Speaking of Bristol, her boobs pouring over her corset look decidedly fake, highlighted even further by the high definition image on the Blu-ray. Finally, as ever, Hammer have a bland young dispensible blonde hero in the shape of unknown Graham James as Wilhelm, proving himself to be even blander than even Christopher Matthews in Scars of Dracula.

Of course an aspect of the Frankenstein films is the collecting and stitching together of the body parts. Some of the gruesome murders and grave robbing or cutting-up of corpses is done off screen, and the more effective for it (even if this was more to with budget constraints than anything else). Sure, this film was a part comedy, but it is doubtful the rubberised hands and limbs were intended to be this bad. When the monster is eventually put together by numbers, the result is a curious one. The creature this time round is played by Dave Prowse, an actor who appeared as muscle bound figures in small roles, was the TV Green Cross Code man and played the monster for Hammer twice (the other being Frankenstein and the Monster From Hell, 1974). At 6’6″ (1.98 metres), Prowse stands tall as this unusually muscle bound creature with a shaved Karloffian head. He lumbers as he should, while some of his facial gestures resemble Christopher Lloyd more than anything else. Of course Prowse would later go on to have a distinguished career as Darth Vader (as the man in the suit at any rate). The sets too are very wobbly and cheap looking. Unlike the bad castle model in Scars of Dracula, here stock footage of Burg Hohenwerfen in Austria stands in for the castle (the castle used in Where Eagles Dare, 1969).

As with the other Studiocanal releases, there is an interesting 15 minute documentary on the film adding a great deal of historical context. All these documentaries are made by Hammer Studios expert Marcus Hearne and feature intereviews with such luminary horror film experts as Jonathan Rigby and Alan Barnes and also includes a candid interview with Veronica Carlson.