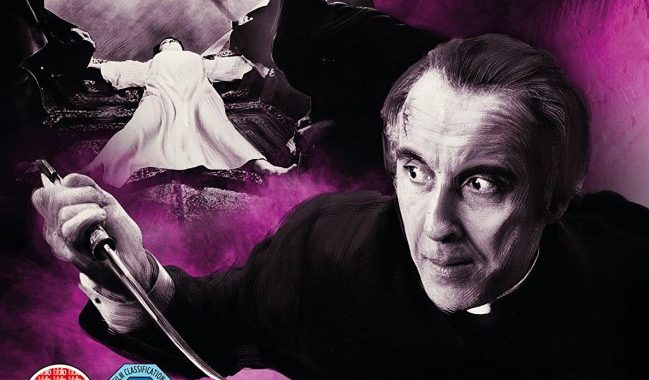 To the Devil a Daughter (1976) is a significant film for many reasons. Most significantly it was the last film Hammer Studios made before the short running ‘Hammer House of Horror’ TV shorts in the early 1980s and then the later re-boot with Woman in Black (2012). The film was, somewhat unfairly, criticsied at  the time as a not-so-good horror film, making it all a rather sad demise to the studio. With a bigger budget than usually thrown at their films (in thanks due to the co-production with a West German company, Terra Filmkunst), this was a first for the studio and, significant still the majority of the film was shot on location in Bavaria at Lake Chiemsee and in London. Other locations included aerial shots of the Houses of Parliament, Brompton Oratory in South Kensington, as well as locations around Tower Bridge, St. Katherine’s Docks and a finale shot at the Dashwood Mausoleum in West Wycombe. This might seem insignificant, but for a studio that mostly shot either in the studio or at Borehamwood, it’s a big difference (other than the two modern Dracula films and some of their feature length versions of TV comedies).

Made the same year and released close to the biggest horror film of 1976, The Omen, To the Devil a Daughter is a response to other more recent bigger possession horror films such as Rosemary’s Baby (1968) and The Exorcist (1973). Indeed these films helped change the direction of the horror film (The Omen was also symptomatic of that change) that led to a whole host of copy-cat possession horror films from the US, UK and Europe. However, Hammer had ventured into this kind of film before, but the style here is very different. In 1968 Hammer adapted another book by Dennis Wheatley, Terence Fisher’s The Devil Rides Out. The treatment to the new film was very different. Christopher Lee knew Wheatley personally, who reportedly hated this film. He allegedly had some old fashioned values and was not in tune with the latest trends.

In this film, Lee is arguably an even more sadistic figure than his turn as his most beloved character, Count Dracula. The beginning of To the Devil a Daughter opens at a Bavarian monastery with a priest, Father Michael Rayner (Lee) preparing to send a young teenage nun (Nastassja Kinski, daughter of Klaus) back to England. What for is not yet revealed. Our first impression is that Father Michael represents good. In England, an occult specialist, John Verney (Richard Widmark) is at a launch for his new book when he is approached by a nervous man (Denholm Elliott), begging Verney to help look after his daughter who is arriving from a monestary in Germany and keep her hidden. He picks up the nun Catherine from Heathrow, evading her escort and squirrels her away in his dockside apartment. It soon becomes apparent that Father Michael and his cohorts are part of a Satanic cult. A woman Father Michael helps to give birth dies during pregnancy labour, while at the same time Catherine endures nightmares (a reference to Rosemary’s Baby). Catherine’s father also becomes agitated and feels the power of the Satanic cult. In a flashback we see Catherine’s mother die in childbirth and Father Michael nurtures and protects the young Catherine to become the bride to the Grand Duke of Hell, Astaroth. Verney helps Catherine but also begins to learn that these Satanists are not the “98%” nutters, but instead the dangerous “2%” and the lives of all concerned are in danger, including the naive Catherine who is under Reyner’s control.

Christopher Lee is in one of his most malevolent roles as Father Michael Rayner. We are not used to seeing this normally serious actor smile, but in To the Devil a Daughter his smile, even grimace seems pure evil. In one scene in which he is helping deliver Astaroth into the world, a creepy little demon, he bends down to the woman delivering the ‘thing’ and gently says to her: “Margaret, you shall die now”. When we see the creature it comes with mixed results. It’s not exactly the Dalek crawling out the machine moment and we perhaps see too much of it, especially when it’s going down on the 15-year-old girl on the sacrificial altar. How they got away with this, even back then is anyone’s guess. In another moment, in a slow motion dream sequence, we also get a full frontal shot of Nastassja moving towards the camera.

To the Devil a Daughter does deserve to be seen in a better light than some critics have given it and there is a sense it is starting to get that recognition. Apart from some scenery chewing from Elliott the acting is generally pretty good, although Widmark, who allegedly whinged through the whole production is a little flat. As with the other Studiocanal releases there is fascinating info filled insider films from the Hammer horror experts.