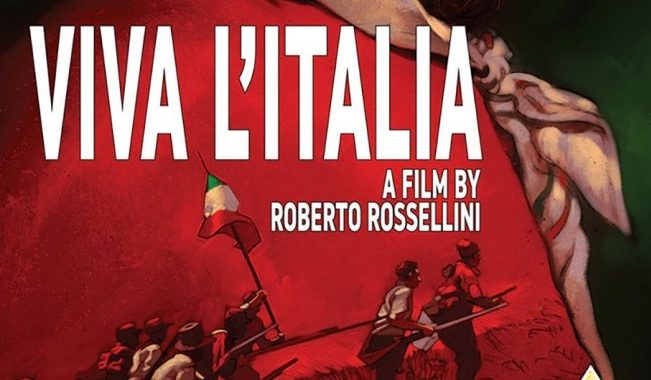 Roberto Rossellini’s film, Viva L’Italia (1961) celebrates the 100th anniversary of a united Italy (well mostly) and is both a romanticised and a literal matter of fact telling of the rise of Giuseppe Garibaldi, the revolutionary Nationalist who finally brought all the states from Piedmont and Sicily and Naples together. Rossellini, who was always apparently neutral politically (even though his first handful of directorial films were propaganda films made in World War II under Mussolini) was clearly very much a figure proud of his nationality and his country’s history. In this film there is a almost a hero worship focus on this leader and revolutionary that idolises and in awe of this leader. As philosophical writer Tag Gallagher recognises on his visual essay on Garibaldi and the film on the disc, the camera is always on him.

Set in 1860, the film is romantic and mythologises the story of this enigmatic general as he and his men cross Palermo and Sicily to Messina, cross the Messina Straits and march through Italy, culminating with the meeting between Garibaldi and the King of Italy, Victor Emmanuel II on the bridge at Teano in October 1860, one of the key moments in Italian history. The director is very careful to be accurate in the telling of this history, both in action and the look and costumes of the participants. Again, as Tag Gallagher demonstrates in his featurette essay, many of the actors playing historical figures look like their characters. Giuseppe Garibaldi is played by Renzo Ricci, an actor who was well into his seventies when he undertook the role (the man himself was 53 at this point). But this doesn’t matter, for Ricci had the right look; the monarchs, politicians even writers, for one of the witnesses, friend and supporters of Garibaldi at this time was Alexandre Dumas, the writer of ‘The Three Musketeers’ all sport the right clothing, hairstyles and facial hair. Rossellini is careful to accurately portray them. This helps Rossellini deliver the almost deified image of the self subscribed leader. One of the clear observers of events is Giuseppe Bandi (Franco Interlenghi) who is clearly seen as an observer for it was his accounts that become the basis of the story.

The action or sequences in the interiors portray the events and dialogue as the leader negotiates, contemplates and discusses events. Exteriors focus on the action with its many battle sequences. These battle scenes are very original and ambitious in the way they portray the battles and events in their actual locations. The director, probably like Garibaldi himself, shoots down onto the expanses of the sunny hillscapes as canon shells explode and men from opposing sides charge at each other. With a limited number of extras he was still able to capture the expanse of the battle scenes as the men in the blue coats fight against the red shirted revolutionaries, while a driven Garibaldi looks on fighting the Bourbons (and no this is not a battle of biscuits). Not a director known for portraying big events on an epic scale, the director, with the help of his loyal 2nd unit director, Ruggero Deodato shot on a large expansive area as we see distant canon explosions. Some of the close quarter action, however, shows some poor acting from the extras.

Although some of the picture quality, the colours are incredibly violent on this 2K restoration from the original negative. Indeed the colours of the bright costumes are incredibly vibrant. This film is rarely ever shown in the UK and is therefore it’s a treat that Arrow Academy have released it for the first time on video in this country. Other than the excellent contextualizing essay by Tag Gallagher, other extras include an interview with Deodato, as well as the shorter US dubbed release of the film, titled simoly Garibaldi.