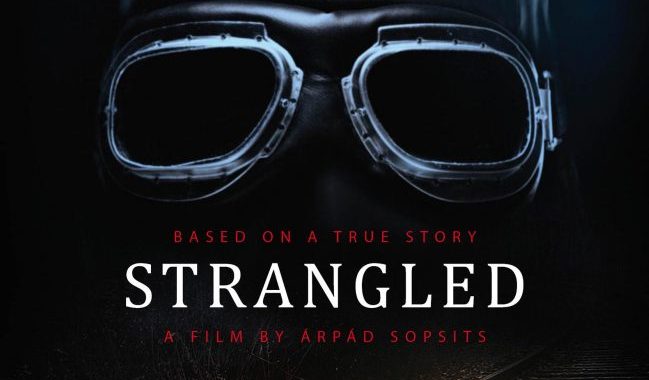 [Spoiler alert.] From Hungary, the latest film to be released on Montage Pictures, the subsidiary label to Eureka Entertainment is Strangled based off the real story of a serial killer operating in Hungary in the late 1950s and 60s. The film opens in 1957, the year after the uprising in the country was aggressively put down by the Soviet Union in the midst of the so-called Communist ‘Utopia’. Set in the provincial worker town of Martfú where the worker of a shoe factory, Akos Réti meets his ex-girlfriend after work. When she refuses to go back with him, he hits her. Later she is found strangled, raped and murdered by a canal. He is arrested for her murder, is tried, initially does not appeal and is condemned to death for her murder, later commuted to 25 years.

7 years later, while Réti is still in prison, another woman is found murdered with similar wounds and having been raped. Another woman is attacked and left on a railway track but survives and wakes just before being hearly struck by a passing train. A police inspector does not believe that Réti is the murderer of his former girlfriend, but has trouble convincing his (party) superiors. Another woman called Nora also survives after screaming when she was being attacked causing the would-be killer to flee. Nora’s husband, Pál Bognár is a truck driver at the shoe factory and before long he is revealed, unbeknownst to Nora as the serial killer . It transpires that Bognár has trouble getting an erection under normal sexual situations but becomes aroused when he murders and rapes and is in essence a necrophile. Meanwhile, Akos Réti continues to languish in jail while Bognár stalks his prey for sexual kicks.

Director, Árpád Sopsits has already proved with the handful of films he has made that he uses some graphic realism in his dramas. In Strangled he follows along this familiar path, not shying away from some graphic necrophilia. Sopsits film is a realistic one telling of events as they happened and giving a good interpretation of Hungary behind the Iron Curtain with a few Trabants driving around. Having said this, there of course some predecessors to this film, primarily Fritz Lang’s M (1931), the films of David Fincher and a whole genre of serial killer films. Elsewhere, Daniel Espinosa’s Child 44 (2015) which starred Tom Hardy and Gary Oldman also pitted a rogue party official investigating a series of murders and child killings by a serial killer in 1950s Soviet Union. Child 44 more obviously dealt with party interference with a non-political crime, but the theme is more subtely handled and localised in Sopsits film. The claim by the party official “That there are no serial killers in the country! is that clear?” sets the problems that the suicidal Réti faces. It is only later in the film do we begin to understand why Réti, perplexingly is so willing to admit that the initial murder with the weight of the state against him.

Giving a sexual explanation to the killer is most definately to the films benefit and goes somewhat, as unpleasant as the character of Bognár (Károly Hajduk) is with his wry smile, is given some explanation or a modicum of understanding for his heinous crimes. The ending does not necessarily bring much in the way of happiness, even with the catching and conviction of the serial killer. It is now 1968, the year in which there was another Soviet uprising, this time in Prague.