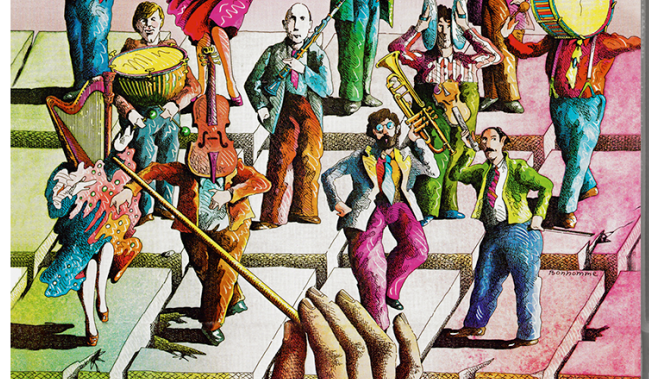 In 1992 in a Sarajevo square during the civil war, a musician, Vedran Smailović played cello for 22 days while the city was under siege from Serbian forces. This was seen by the outside world as music representing civilization countering the barbarism of the civil war in Bosnia. Music, especially classical music is often seen as the height of civilization. Federico Fellini’s 1978 film, Orchestra Rehearsal uses the members of an orchestra who highlight human relations and interactions. It was originally made for television but was also shown theatrically is a fairly low key film in that it was mostly a cast of unknowns and is set in an early Romanesque chapel.

The plot of the film is quite simple: a TV documetary crew arrive at a chapel to film an orchestra rehearsing for a concert. They interview the conductor and some of the musicans and film their squabbles and fights as discipline breaks down, with a revolt carried out against the conductor and threaten him with the musician’s union. Anarchy and chaos takes over. Of course the metaphor for the film is a fairly obvious one standing for the in-fighting in Italian politics or, as others have interpreted as a metaphor for the fall of civilization (with portraits of Mozart among others adorning the walls of the chapel and orchestra space). Politics was becoming more revolutionary in the late 1960s and early 70s in Italy as it was elsewhere and it was this that Fellini was referencing in Orchestra Rehearsal.

Fellini’s films have often been read as self-indulgent, the height of his artistic output in the 1960s and early 1970s with Amarcord (1973), arguably the director’s last masterpiece. Orchestra Rehearsal is very modest in scale, only highlighting further the maestro’s self indulgence. This debacle in the film reaches its peak when a wrecking ball smashes through a wall of the chapel killing the harpist. When the orchestra play their final piece they look on at the harp lying on the rubble (the symbolism of the harpist playing her harp elsewhere is humorous).

All the music used is by celebrated film composer and Fellini regular Nino Rota (significantly this was his last film score from a composer who previously had written the music for The Godfather films) and as usual there are a number of grotesques and caricatures among the musicians. Overall, as with his later film, this is disappointing and a little dull in comparison to Fellini’s earlier films.

Extras on the disc include a nice and thorough visual essay by Fellini biographer John Baxter who puts the film into context with the director’s career making the point as to how disappointed he was with the end result of Casanova (1976). There is also a visual gallery of artwork and lobby cards for the film and a discussion on Nino Rota and Fellini by Richard Dyer.