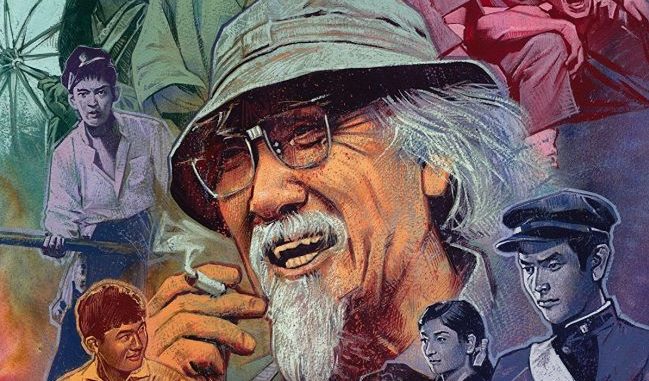 Seijun Suzuki is one of Japan’s most interesting director’s. At almost 95-years of age, with his last film being Princess Raccoon in 2005, this box set, as the title states covers a segment of his films from the earlier part of his career. He is probably best known for the controversial film, Branded to Kill (1967) which apparently due to its opaque and abstract story led to his sacking by the Nikkatsu film company and, ultimately his banning from making any other films for many years. Apart from a couple of smaller efforts and some TV movies he did not make another film until the arty Yumeji in 1991, released on Arrow Academy as part of the Taisho Trilogy.

Japan, more so than in western cinema split their films into genres and these cover his youth films from the late 1950s through to 1965. All these films were produced by Nikkatsu studios and all are black and white bar one, The Wind-of-Youth Group Crosses the Mountain Pass (1961) which is filmed in vivid colour. A couple of the other films show the influence of western delinquent or teen cinema that was coming out of Hollywood with such films as The Blackboard Jungle (1955) or Jailhouse Rock (1957). What these first two films highlight is how influential American culture was in Japan (in post war Japan, sports such as baseball also became popular in the country, as it remains today).

The earliest of the five films is The Boy Who Came Back (1958) (sometimes known in English as Spring Never Came). It is the story of a wayward teenager from a reformatory school who meets a girl who tries to tame him, but he struggles to move away from his violent past. Another film in the collection continues this theme of wayward youth. Teenage Yakuza (1962) is about a violent young man who gets caught up with gangsters. Again, a fairly low budget film, it is about a young man who tries to go straight and clean out the criminal elements in the town by becoming a yakuza himself. Some of the action in the film is quite nicely choreographed. Interestingly the film shows a change in a number of areas, including the town’s re-development and, dare I say, a commentary on westernisation. At 72 minutes this is also the shortest film on the set.

As previously mentioned the only film is colour is  The Wind-of-Youth Group Crosses the Mountain Pass which doesn’t deal with delinquent youth but follows the adventures of a wandering students who arriving in a small hub country town joins a carnival troupe. The elder of the group wants his variety act to be a success but finds that it is only strippers that the predominantly male audience want to see. When the stripper leaves he sees this as an opportunity to start again with the help of the young man who falls in love with one of the girl’s and helps fight off a yakuza assassin. The film is light and less dramatically heavy than the others, but in spite of its Summer Holiday (1962) life lightness it still never the less more adult in content than the latter. It still manages to fit in a sad ending.

The final two films change theme completely. This time they are set earlier in the 20th century, in the Taisho period that he would return to in his later films. They are both based off novels by Toko Kon. The first is arguably the best film here, The Incorrigible (1963) (sometime known as Bastard). This is the story of a young man, Toggo Konno (Ken Yamamauchi) who is at college but rebels and becomes difficult with his teachers, class mates and most especially with the school’s moral police force. He starts to fall for a lusty doctor’s daughter, Emiko (Masako Izumi). She is a nice conservative girl and begins to tame him as she introduces him to literature (notably August Strindberg’s ‘The Red Room’). The drama in this film is quite strong and we start to see a director set apart from many of his peers.

Many similar themes continue through with his next film and the last on the set, Born Under Crossed Stars (1965). Again starring Yamamauchi, a village boy is a young confidant student who comes into conflict with the school’s moral police and falls for two girls, a nice conservative girl and a girl of looser morals. The drama is lighter than The Incorrigible, but never the less more sexually explicit with some nudity, is violent in places and with darker characters, including violent yakuza and a dreadful deadbeat father.

Suzuki’s golden period was between 1963-67 and with these films we are able to see a movement between his programmers and the type of films that would lead to such films as Fighting Elegy, Tokyo Drifter (both 1966) and Branded to Kill. Recently many of Suzuki’s films have seen released on such labels as Arrow Video (which this set has been released through), Arrow Academy and Eureka Entertainment. These films, with another volume of early films set for release in April, are not available anywhere else, even in Japan and is therefore is a fantasic opportunity to re-assess this interesting director.

There is, as ever with Arrow’s Asian films, a knowledgeable lengthy introduction to the films by Tony Rayns, stills galleries and on Born Under Crossed Stars a commentary by Jasper Sharp.