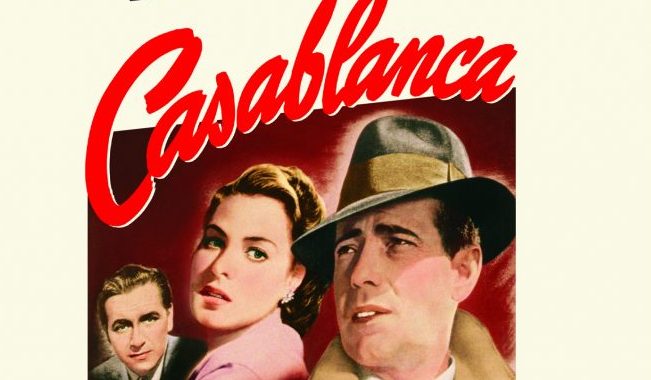 How do you do a review of Casablanca and say something that hasn’t been said before? How do you critique the greatest film from Hollywood’s studio system from the Golden Age? The answer is, you can’t. What you can do though is talk about the tons of extras on the film, its legacy and the background to the film. There are so many classic lines which have entered the lexicon of the every day (although the most famous, “Play it again Sam” is never said in the film). It became an immediate success on its release, won three top Academy Awards and its success continues to endure, often being cited as one of the greatest films films ever made.

Made in 1942, in the early days of World War Two (for the United States), this was probably one of the greatest of those films made in the early days of propaganda and certainly makes its own statements about waking the United States from its slumber of isolationism while much of Europe was plunged into a devastating war. One reading of Bogart’s iconic role could be that this existential hero represents America herself. Until the end of the film, Bogart’s Rick is the Casablanca bar owner who continues to profess that he is neutral while helping dissidents and refugees to escape from the Nazis and their Vichy collaborators in claiming exit visas or Letters of Transit. He finally steps over the line and makes a clear decision as to which side he must fight on. Rick plays off the camo and corrupt Police Chief Renault (Claude Rains) and the cold Nazi, Colonel Strasser (brilliant German actor, Conrad Veidt in his final film) with the characters hanging out at Rick’s bar. His life is turned upside down by the arrival of his former lover (Bergman), who were separated when the Nazis entered Paris in 1940. She has arrived with husband, Victor Laszlo (Paul Henreid), a fugitive and concentration camp escapee looking for Letters of Transit to escape to Portugal and ultimately to the United States.

Humphrey Bogart was becoming one of the biggest stars for Warner Brothers having played gangsters or appearing in crime films for the studio for the past decade. He was gaining further traction as a star with High Sierra and in John Huston’s The Maltese Falcon (1941). For the studio he had also proved himself to be a romantic lead in the women’s melodrama, Dark Victory (1938) playing opposite Bette Davis, making him an unlikely romantic hero for the role of Rick. One does wonder how the film would have been with its original cast: Ronald Reagan, Ann Sheridan and George Meeker in the roles that would eventually go to Bogart, Bergman and Henreid. George Raft was also ahead of Bogart and he would have been good in the role (they were after all very similar actors) but Curtiz was adamant that he wanted Bogart. Bergman was of course well cast as the romantic other half; she was one of the greatest of tragic romantic leads. On an extra on the disc, Bergman’s daughter, Pia Lindstrom says that whenever his mother was asked about Casablanca, she would look confused as her focus, even then was on the film she would make after, For Whom the Bells Toll (1943), a role by contrast she fought for.

Made by Warner Brothers and produced by Hal B. Wallis, a producer who managed to turn any of his films into gold for Warners and later Paramount made his films for a modest budget and made them look expensive and lush. He employed Hungarian emigree director Michael Curtiz, known for his action films. The film is shot entirely on a set with no locations (other than a small airport sequence when Colonel Strasser arrives in Morrocco). Everything seemed to come together on the film from the director to producer Wallis’s suggestions and of course the brilliant cast, including the character actors. But the brilliance of Casablanca must of course also go to the script team by Julius J. and Philip G. Epstein and Howard Koch in which the script was being altered and added as the film was being made. Without the lines, without the script, all the other elements would not have worked.

You could not have a more complete set for the film. Released as a dual format on DVD and Blu-ray on the Warners Premium Collection, exclusive to HMV (and by default Fopp) it is also packed with extras, including a whole bunch of Looney Toon cartoons, including those that relate to Casablanca. Among the myriad of extras include an introduction by Bogey’s long term wife, Lauren Bacall, a recollection of their parents by Bogart and Bergman’s children, as well as superb documentaries on Curtiz and the chemistry between Bogart and Bacall and of course a whole bunch of documentaries and featurettes on the film itself. An added bonus is a glossy 62 page book with tons of photographs and fascinating illustrations of memos between Curtiz and Wallis among others.

On the new transfer the picture quality is so sharp that it does make the models look more ‘modelly’ and the sets and matte paintings more fake. Never the less the sharp image of the film brings out the details of the decor to a strong degree and besides the artifice of the film is a part of its style and theatricality.

“Here’s looking at you kid!”