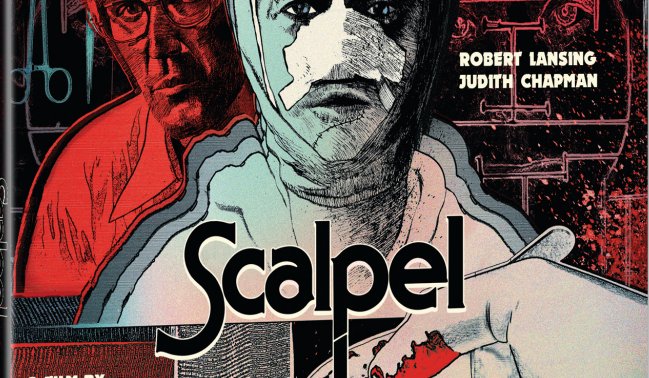 Once again Arrow Video have unturned a stone and re-discovered and released an obscure, long forgotten film from the 1970s, Scalpel (1976). It’s a Southern Gothic thriller with creepy undertones, with tropes not too dissimilar in style and tone to thrillers such as Robert Altman’s Hush, Hush… Sweet Charlotte (1964) or Brian De Palma’s Obsession (1974) with its strong psychological element. The shooting at an anti-bellum home in Georgia also adds to this. But this also has a doppelgänger driver to the story. The surgery aspect and gothic style also recalls many of those Z grade films from the 1940s starring the likes of Boris Karloff, such as Black Friday (1940). It stars a number of actors better known for playing on TV, soap operas and such the like.

The plot twists and turns, especially in the final 30 minutes of the film. The main character is Dr. Philip Reynolds (played by Robert Lansing, best known for appearing in any number of TV shows and the sc-fi classic B movie 4D Man, 1959). Reynolds is a self-confessed egotistical surgeon who misses his beloved daughter who disappeared after he murdered her boyfriend for making out with her. Reynolds and his brother, Bradley (Arlen Dean Snyder) attend the funeral of their father who have left virtually nothing for them but instead leaves $5 million to Philip’s missing daughter, Jane. After a night out, the two men drive home and nearly hit a half naked woman left for dead on the road. The girl is Heather (another TV soap actress, Judith Chapman), a go-go dancer beaten at the club almost beyond recognition. He fails to contact the police, but instead restores her features – to look like his missing daughter. He squirrels Heather away and eventually passes her off as his daughter in order that they can split the inheritance between them and become lovers. It’s not too long before brother Bradley suspects that this is not Jane, but Heather and the couple think they have gotten away with it when Bradley has a heart attack and dies. That is until the real Jane turns up.

The film does have a wonderful gothic feel to it and is led by two great performances from Lansing and Chapman. Scalpel is directed by John Grissmer, a director who has only directed two films, the other a slasher film, Blood Rage (1987). The Southern Gothic element does make it feel more like a horror film than a thriller, with some elements really come alive in such a low budget film. Firstly, there is the cinematography by Edward Lachman, shooting here one of his first films. Lachman went on to be a cinematographer of some distinction as cinematographer on The Virgin Suicides (2000), Ken Park, Far From Heaven (both 2002) and the recent TV mini-series, Mildred Pierce (2011). The film is presented in two versions on the disc: the yellowey and green tones that give it more of a gothic look and, presented here as an approved restoration version by Lachman, as well as a more traditional toned version for comparison. Lachman also pays tribute to Arrow Video on an interview for allowing him to work on restoring and having some input on the Arrow release. Whichever version you choose to watch the 2K transfer is spot on. What gives the film some class is Bob Cobert’s romantic sweeping score, a kind of creepier ‘Theme From a Summer Place’.

What does let the film down somewhat is the almost laughable twists in the plot in the last 30 minutes or so where we see Heather and Jane play off each other and which girl will the good doctor try to bump off. It’s a cheap film, but most certainly an interesting release for Arrow to unearth and includes some engaging interviews with Lachman, Chapman and Grissmer.