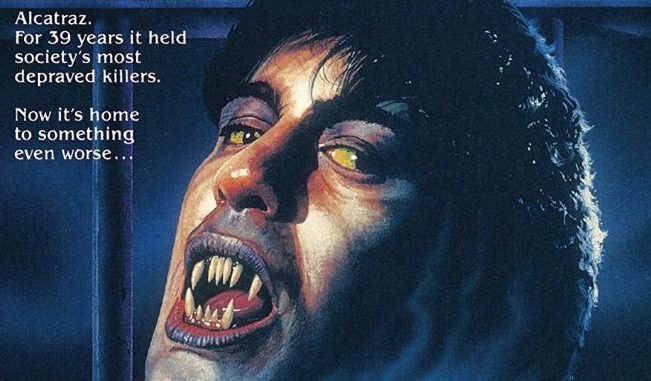 There are some films from the 1980s that are best left from whence they came and Slaughterhouse Rock (1988) is one of them. A plot about young people threatened by ghosts and demons on the abandoned Alcatraz island is a fairly laughable and bad film with plenty of scenes of gore for those who love that sort of thing.

Originally released direct to video in the UK, the plot of this low lit horror initially centres on Alex (Nicholas Celozzi) who suffers from seemingly very real and lucid nightmares of flesh being torn apart and a beast out to get him. These nightmares also seep into the lad’s waking hours. He claims that all the victims in the nightmres are former inmates of the prison of Alcatraz at the hands of a cannibalistic warder. Alex relays his fears to his friends and tells them how real they feel. A short while later this manifests itself into the real life when his friends see him hovering over his own bed. The group’s school teacher advises them to go to the island and seek answers there. Needless to say that once they are on the rock (of course surrounded in a blue fog as though this were a soft rock video) they come under attack by a presence, not least of all Alex’s brother who becomes possessed and turning into a werewolf type beast, who’s not above a bit of sexual molesting when the need arises – especially when it’s a nude hottie (Playboy playmate Hope Marie Carlton).

The 32nd title in 88 Films’ Slasher Classics Collection, this is a cheap horror film that draws on many films, not least of all the A Nightmare on Elm Street franchise and a contemporary film, Prison (1987) among other themes with possession ruling the day. The camera angles and poor shadow work do give the film a closed in dark look (that blue filter again). The cinematography was by Nicholas von Sternberg, son of the great director, Josef von Sternberg, the man who led and drove the career of Marlene Dietrich. Nicholas von Sternberg directed many a B movie and this title is one of them. There is a fascinating interview with von Sternberg who talks about his eventful life as a cinematographer of low budget films (who has now retired from filmmaking and is now a teacher) in an accompanying booklet with the disc.

Another element is the music by Devo, less than the usual avant-garde and here sounds more commercial and mainstream middle-of-the-road electro rock. Another comic element is the appearance of singer and dancer, Toni Basil as one of the only names in the film. Best known for her early 80s song ‘Hey Mickey’ and as a choreographer, here gets to wear some outrageous couture clothes and even has a weird dance move sequence as though she is possessed herself. No cheerleading though.

But be under no doubts, Slauthterhouse Rock is a bad film, with little to recommend it other than a classy look from an 80s performer, Basil. As with other releases by 88 Films the transfer looks good and clean and there is a small featurette by slasher fan and writer, Jim Harper, author of ‘Legacy of Blood’.