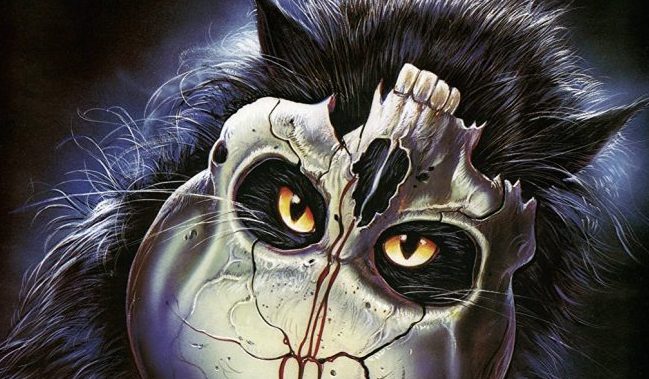 Of Cat in the Brain (1990) (sometimes known as Nightmare Concert), many have referred to Lucio Fulci’s late film as his gore effort of Fellini’s 8½ (1963). This does seem a bit of a stretch in a story about a horror filmmaker (played by Fulci himself as himself) who is at something of a crossroads in his life, disturbed by all the horror he has seen. He visits a psychiatrist (David L. Thompson) who puts the director under hypnosis and threatens to torment him. As Fulci goes through his days, he is followed and stalked by the psychiatrist who leaves a trail of murders behind, seemingly framing the director. Fulci is unsure if he is actually the serial killer and is confused at what is reality or dark fantasy. And so it goes. Unfortunaltey there is no suspense as we know who the killer is from the get go.

A Cat in the Brain turned out to be Fulci’s last horror film but he is clearly ill and has edited into the film a mish-mash of other late lesser of his own films including Il fantasma di Sodoma and Touch of Death (both 1988), mostly with the horror video sequences. Although as a performance Fulci is pretty dreadful, the way he gazes at the bodies of corpses and death, being as ill as he was at the time, you can’t help contemplating as to whether he feels as though he is gazing at death himself. But we must also ask if this cheeky director is messing with us in a tongue-in-cheeky way, playing himself as a director questioning the horror imagary he is being exposed to – much in the same way as the director was disturbed by the films he was making in Evil Ed (1995). We do know that Fulci was cynical about psychiatry and therefore he seems to be having fun with writing in a psychiatrist as a twisted protagonist.

A Cat in the Brain falls well short of Fulci’s best films from his best years – Zombie – Flesh Eaters (1979), The Beyond, The City of the Living Dead (both 1980), The House by the Cemetry (1981) and Manhattan Baby (1982), but seems somehow a fitting end to his horror career as a contemplative effort. Never the less, shot in 16mm the film looks somewhat grainy but on this blu-ray it is unlikely it will ever look better. (It does pose the question as to what the film would look like on a bad VHS copy.) The film became instantly notorious on its release and was banned in the UK. Shortly after it gained the moniker as a video nasty. The cheap look of the film does make it look like an Italian Herschell Gordon Lewis gore and splatter film. The violence is not very realistic but none the less nasty with plenty of decapitations and sometimes laughable severed limbs. The films opening scene has a rather obvious cat model eating a gellatinous mess of brains to give an example of the movie’s yuck. It has been said that Fulci is a misogynist and the way that his camera rests on the bodies of busty women before they are savagely murdered would more than sugget this, giving some justification to those claims. It would be fair to say that the film is for Fulci/gore fans only and would not work as an introduction to the director’s work.

The 39th title in 88 Films Italian Collection and with options to watch in both English and the original Italian version (with subtitles of course), the disc also includes a superb 40 minute documentary analyzing late Fulci’s work, putting A Cat in the Brain in context with his films. The featurette includes views on the film and late Fulci works by such horror luminaries as Calum Waddell, Kim Newman and Allan Bryce, editor of the superb Dark Side Magazine, as well as by Antonio Tentori, a screenwriter on Fulci’s later films. There is also an extract from a live musical performance by Fabio Frizzi in Hollywood as well as an indepth small booklet on the film by Calum Waddell.