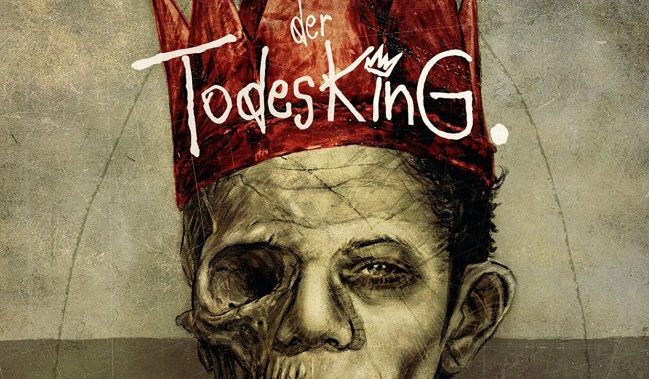 Sandwiched right in the middle of his Nekromantik (1987) and Nekromantik 2 (1991), Jörg Buttgereit made the arthouse Der Todesking (1990). For anyone who has seen either Nekromantik film will know how messed up these films truly are and what to expect to some extent from Der Todesking. The theme of this film, translated as ‘The Death King’, deals with seven suicides, each representing a different day of the week to highlight the every dayness of suicide as an act. It is a very short film at 72 minutes and there is something disengaging and disinterested, even matter-of-fact about each of the suicides. There is no explanation, they just happen. In the first story (Monday) we see what we presume is a lonely man in his flat with only his goldfish as the thing he can relate to. He decides to pour himself a bath, gets in the bath and poisons himself. At the very moment he dies, so too does his goldfish. And so on.

In the next episode (Tuesday), a man goes into a video store and thumbs through the videos on the shelf. The camera pans in a POV shot across the shelves, many of the video cassettes, which received new life with VHS and Betamax – Texas Chainsaw Massacre, Toolbox Murders and even Nekromantik among them. After picking up My Dinner with Andre (1981), he spots a Nazispoitation picture, the notorious Ilsa, She Wolf of the SS and chooses that bad ass exploitation classic. When he sits down at home and watches it he is shocked by the torture porn of the film and castration, but also revels in it. When his girlfriend walks in and berates him, he picks up a gun and shoots her in the head. The camera pans around the room, until we see that he has hung himself.

Each of the stories/suicides are different and presented differently. For example, for the Thursday sequence we see shots from the underside of a high autobahn bridge and apart from the music we see names superimposed on the screen with ages and the occupation of all the people who have jumped to their death from the bridge. Intercut in between each of the stories is a corpse, shot with stop motion photography that decays down to a skeleton by the film’s end. On a 1991 documentary on the making of all three of these films, Corpse Fucking Art (included on the disc), Buttgereit explains that his mother died while building the corpse, giving him an extra ironic nuance to the making of the film.

The film feels grimy and seedy, aided by the fact that it was shot on 16mm film and very grainy. However, for anyone who has seen Nekromantik, this film is relatively tame in comparison, but never the less is an interesting and shocking parable on death and, dare I say it more intelligent. The overall grimness of the film is aided by Hermann Kopp’s score and the music in the film which ranges from the pulsing electric cello and in other more romantic flourishes, an Erik Satie like piano score. The music certainly gives an added lair to the disturbing elements of the film. Kopp appears as the suicide victim in the first film.

Despite being a very grainy film, it has been restored to 2K and the release by Arrow Video is very complete, packed as it is with extras. Appearing as a three disc set, this includes the aforementioned hour long Corpse Fucking Art documentary, an interview with Buttgereit, as well as a handful of shorts, a making of documentary, a featurette on Der Todesking tattoos, Kopp on the music and a separate disc with a soundtrack. Needless to say this film, like Nekromantik is a cult film and will have limited appeal and audience beyond its cult followers.