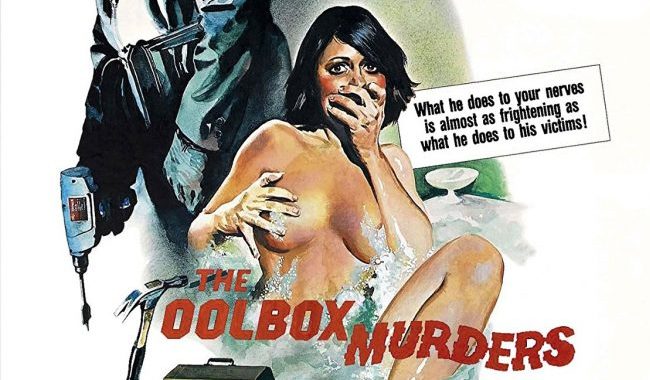 A true classic slasher and appropriate for 88 Films to release in their Slasher Classics Collection. Released in 1978, The Toolbox Murders sells itself and frames the story as if based off a true story of events that happened several years before, but in all probability this framing device was not real but never the less, like The Texas Chainsaw Massacre (1974) it gives the film a back story. Indeed there are several parallels with Hooper’s film, both being banned in the UK, along with other so-called video nasties as I Spit on Your Grave (1978), The Driller Killer (1979) (a film that has much in common with The Toolbox Murders), all the cannibal films and The Burning (1981) (as well as many of other titles in the 88 Films slasher series).

While The Toolbox Murders is to many a routine slasher film, it was directed by the late Dennis Donnelly, a director more associated with his TV work than feature films, it does contain some interesting and clever touches. It has an interesting opening and sets up a motivation for the killer that will become clearer later in the film. In the opening credit sequence we see a POV shot of a car driving down a US street at night. We initially perceive the driver is cruising for a victim while the sound of a fire and brimstone preacher is heard on the car radio underneath the haunting score. We then cut to a car crash and its female victim, again this too will become clearer later in the film.

For the next 15 minutes we see a series of murders take place in a Los Angeles apartment block in which a balaclava hatted figure stalks and murders several women. This is the meat and two veg of the film if you like as we witness several young women (in various states of undress) butchered by drill, claw hammer, screwdriver and nail gun. Unlike many slashers the blood shown is at least pretty realistic with much of the more gratuitous slashing taking place off screen. Unlike, say The Texas Chainsaw Massacre where we see little if no blood, in The Toolbox Murders there is plenty. But these scenes were deemed, probably rightly, as misogynistic. The most troubling one that sent the censors and the moral right reeling were the murder of firey red haired beauty, Kelly Nicholls. We see the serial killer spying on her as she masturbates in the bath, while a gentle country song plays (‘Pretty Lady’ by George Deaton). At the moment she climaxes she becomes aware of the killer’s presence who proceeds to chase her round her apartment with a nail gun before dispatching her naked body.

It wouldn’t be too much of a spoiler alert to say that veteran actor Cameron Mitchell is the actual killer; he is still recognisable behind the ski mask. Mitchell had appeared in a number of low budget horror films over the years and had even made several films with Mario Bava in the 1960s. As well as his famous stage and screen support role in The Death of a Salesman (1951) as Willy Loman’s son, he is perhaps best known as Buck Cannon in the TV western series, ‘The High Chaparral’. He is of course the most notable name in the film but is joined by Kelly Nicholls as the girl murdered in the bath who is on the other end of the acting spectrum in that Nicholls became a leading porn actress in the 1980s. There are a couple of interesting extras on the disc, including two fascinating interviews, one with Nicholls who talks about her career, working (with a masked Mitchell) and how she went on to a successful porn career. The other extra is an engrossing, honest and frank talk on the film and most specifically on Mitchell from actor, writer and film historian David Del Valle. As well as a booklet written by Calum Waddell which includes an interview with the films producer, Tony DiDio, there is also an audio commentary with slasher expert and author of ‘Teenage Wasteland’, Justin Kerswell

Despite its dreadful script, on first viewing The Toolbox Murders is a straightforward slasher but on repeat viewings different elements and interesting devices become apparent. There are a couple of moments that reference Hitchcock’s Psycho (1960), not least of all the murder of Nicholls’ character in the bath and in another scene one of his victims sees a dark shape behind a shower curtain, only to reveal a hanging dress. The music too from Deaton with its country ballads adds an unsettling contrast to the violence taking place.

At the time The Toolbox Murders did not resonate or leave a lasting legacy while in the UK it did receive a double billing with Lucio Fulci’s Zombie – Flesh Eaters (1979) before eventually being banned. Never the less as a teenager I do remember seeing the poster when it appeared at the cinema (which adorns the cover of the 88 Films blu-ray release) that has a wonderful and memorable exploitative style about it. On a poor Betamax or VHS release one can imagine how the grainy video image would make the film look even seedier than it does on this nice fresh release. Subsequently the film was remade as Toolbox Murders (2004) by the late Tobe Hooper (dropping the article ‘the’) but Hooper was sure not to make a remake but rather as a re-imagining with a Leatherface killer. Indeed it would be nice to take a fresh look at this film too eventually.