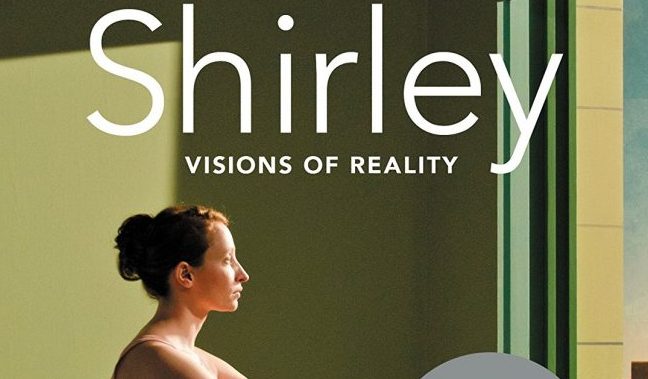 Gustav Deutsch’s Shirley: Visions of Reality (2013) is an interesting experimental film which takes 13 of Edward Hopper’s iconic paintings and along with the likes of Norman Rockwell and Grant Wood are some of the most iconic paintings of Americana before the advent of Pop Art and turns them into a form of narrative cinema. Written and directed by Deutsch, who has his fingers in several art disciplines: music, photography, art and architecture. All these disciplines play out to his advantage in Shirley.

The narrative, as such follows in 13 vignettes the thoughts, aspirations, politics and philosophy of an actress (played by red headed Stephanie Cumming) between 1931 – 1963. In between each vignette is an intertitle, a black screen with a date and location – New York, Albany, New Haven etc. On the soundtrack is a piece of archived radio covering each year represented from the Depression through to tensions in Europe with Hitler, war production, the Korean War, McCartyism, Martin Luther King, JFK and so on. Throughout this period Shirley is seen alone in her room(s) on several occasions and at other times with her partner. We also see  Shirley takes on jobs in New York office blocks (Hopper’s ‘Office at Night’, 1940) and as a cinema usherette (‘New York Movie’, 1939) in which we see a bored looking Shirley lost in thought and plans about her life while a small audience watch Humphrey Bogart in Dead End (1937).

The dates of each of the paintings match with the date of each scene. The camera remains largely static, framing the lonely, angular architecture within the space of Hopper’s work. Within the mise-en-scene, for example the colours and minimal furniture of say ‘Office at Night’ perfectly match Hopper’s paintings, as does the vivid powder blue of Shirley’s address. The muse of Hopper’s art was his wife, Josephine Nivison and while she was somewhat older than the artist, he portrayed her in his paintings as an amaranthine, a beauty that never ages. And so it goes with Shirley. Her red hair, sinuous curves and good looks never age over the 22 years the film is set.

The dialogue, or more realistically, the narration read more like a great American novel, deep and philosophical in prose. There is something compelling about this movie, despite little happening, the figures are almost static in the harsh light while art connoisseurs will be tempted to freeze the image at the moment painted by Hopper. Of course there are some key paintings by the artist that are not captured by Deutsch, most notably perhaps his most famous painting, ‘Nighthawks’ (painted in 1942) or the early ‘Automat’ (1927) showing a cloche hatted woman alone in the automat. There is something lonely in Hopper’s paintings, urban isolation and a starkness in the interiors which Deutsch captures well, aided by the narrative with the burdens of a politically aware and intellectual protagonist in Shirley. In one scene, ‘Morning Sun’ (illustrated on the cover of the Blu-ray) (1952) Shirley rails at McCarty, at director Elia Kazan selling out actors and left leaning theatre and Hollywood, as well as championing the music of John Cage.

Yes, the film is soporific in its pace and tone, but never the less intriguing. The recent animated film, Loving Vincent (2017), in which the life of Van Gogh is animated in the heavy impasto manner of Van Gogh’s paintings shows that there is room for art and paintings to be realised through cinema and filmmaking, but could also just as easily be pretentious or kitsch. A film on Jeff Koons anyone? As with other Montage Pictures releases by Eureka, there are no extras other than a trailer.