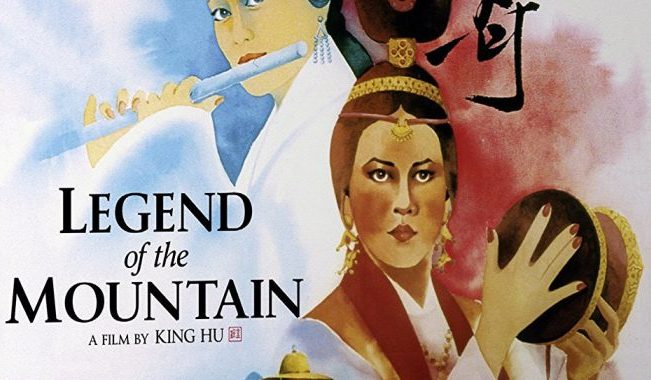 Legend of the Mountain (1979) Blu-ray Review

Released by Eureka Entertainment in a new 4K transfer, Legend of the Mountain (1979) is King Hu’s late masterpiece. Although not a highly prolific filmmaker, King Hu is best known for his wuxia films, a type of swordplay martial-arts film. His directorial debut was Come Drink With Me (1965) which was followed by the interesting Dragon Inn (1967), also released by Eureka! Hu followed this with his masterpiece, other A Touch of Zen (1971), again released by Eureka! on their Masters of Cinema label, which at 3 hours caused some consternation for its producers and was not short of criticism. Although he made a couple of other films after this (conscious that the films should be shorter in length) his next film was also long at over 3 hours.

He wanted a change of direction after the films mad in the wake of A Touch of Zen. These two films would be set during the Song Dynasty in the 12th century and were made made back to back: Raining in the Mountain and Legend of the Mountain using a similar cast and crew as well as the same locations with shooting winding up in late 1978. Legend of the Mountain, like A Touch of Zen had a chequered history, again partly because of its length (at 191 minutes) and as a result the version released was less than 2 hours which did not work as a narrative.

The story of Legend of the Mountain focuses on a wanderer called Ho (Shin Chun) who comes across a man at a large temple, Tsui (Tung Lam) who in turn introduces him to Melody (Hsu Feng), the rather pantomime-like Mrs Chang (Rainbow Hsu) and buck toothed simpleton, Old Cheng (Tien Feng). Ho is seduced by Melody, who had spiked his drink. He wakes up the next morning feeling, uh hum, bad that they had had sex and agrees to marry Melody. Previous to this, Tsui asked this scholarly wanderer to write out a set of sutras (Buddhist scriptures). However, it soon transpires that Melody and her mother have more nefarious reasons to seduce Ho. This is where the film starts to become a battle of witches and warlocks as Ho, with the help of nice girl Cloud (Sylvia Chang) and a Buddhist lama do battle with the evil Melody.

Not easy to watch at over 3 hours, the film has numerous changes of pace and mood throughout. By the director’s own volition it starts off very slowly with Ho wandering across the mountain with the film focusing on nature, beautifully shot throughout by Henry Chan. Hu was criticised for his stylistic use of dry ice and mist with sun light through the smoke, but there is no denying that it is very effective. Elsewhere, following his first drugging by Melody leading to their wedding, the passing of time is shot as a series of montages with love making (unusual for this director) and more shots of nature as well as almost cheesy scenes on swings etc. By the last hour of the film, the focus moves again with a good deal of action, including the exaggerated flying fights and leaps. One of the best choreographed is when Cloud and Ho face down a spirit in a forest recalling both King Hu’s own A Touch of Zen and Yimou Zhang’s House of Flying Daggers (2004), while the fight sequence and shape shifting by Melody is deliberately confusing.

The package on this release in the Eureka Masters of Cinema series includes a couple of very good and informative featurettes that talk as much about King Hu as they do about the main feature. These include a wonderful visual essay by David Cairns and a talk on Hu and the film by Asian cinema expert, Tony Rayns.