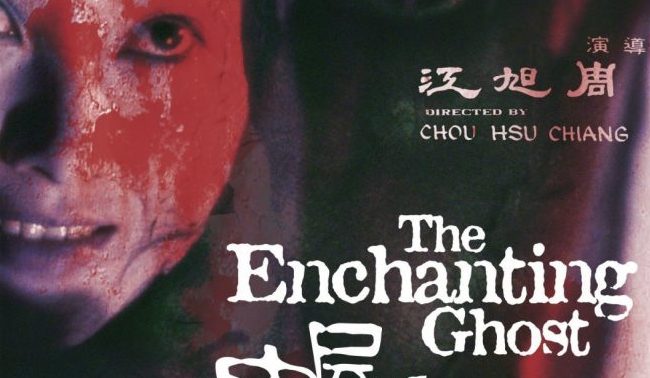 Beware – spolier alert! The Enchanting Ghost (1970) is an early Asian ghost story, not the blood and guts that some of the more extreme Japanese horror films that would later emerge or even the cover would suggest. The horror or ‘ghost’ element of the film is only suggested at the beginning and actual towards the end of the film but is a film with some gothic atmosphere, albeit a Far Eastern gothic atmosphere.

The story itself is quite simple. Set in Ancient China, it opens with a pedant (what appears to be a young, but eternal Confucian student) called Master Lang who rents a house just outside of town. This is where the films first confusing conjunction appears to western audiences. The character of Lang is played by a Taiwanese actress, Li Hua Yang who is not only a woman playing a male student, but is a very feminine actress. Of course this is not unusual in the Asian tradition of theatre or cinema. For western audiences, think of the character of the Buddhist monk, Tripitaka played by the feminine actress Masako Natsume in the popular Japanese martial arts fantasy TV series ‘Monkey’ which ran between 1978-1980. Also in the West with Mediaeval and classic theatre it was common for gender reversal roles (as portrayed in Shakespeare in Love, 1998). But this is not to suggest that there is any literal or

sexual gender reversal here, just a part of a tradition. Lang is warned that the rundown house he has rented is haunted by ghosts and in his youthful and active mind noises and creeky shutters make him somewhat jumpy. He comes upon a room in which he sees the bloody face of an old woman lying on a bed when he clocks beside the bed the black hair of possibly a woman (anyone who was ever traumatised by the image of Sadako’s hair in the chilling Ringu, 1998, maybe terrified by this image). The woman turns around and says her name is Ruyu (Mei-Yao Chang) and is not a ghost, but that her and her mother were attacked by bandits on the road.

The young student and Ruyu fall in love and live in the house, Ruyu making uh hum, a man out of Master Lang. Although sexuality is often repressed in Chinese or Hong Kong cinema, there is something sensual about the relationship. Not much happens for the next 40 minutes or so other than we get a sense of the relationship of the couple until we meet a character called Shi (Ming Lei) who threatens to take the house from them. He rapes Ruyu  (which actually happens in our imagination with little seen of the violence on screen). She is so mortified she throws herself in the pond outside of the house and drowns, living up to her threat to haunt her attacker, which she duly does until his death. The haunting sequences are both eerie and cliched as we here howling, Ruyu’s powdered white face and lunging towards Shi. Some of the gothic elements of the film, particularly after Ruyu becomes a ghost with some of its coloured gels in the lighting are reminiscent of 60s Mario Bava. An intriguing thought that director Hsu Chiang Chou would have been familiar with Bava.

While there are no extras on the disc, the packaging is very nice done with a reversible sleeve and a slip case illustrated with the films original poster. The film is an attractive HD restored version and there are some interesting contextual sleeve notes by proud Hong Kong aficianado Linge Dong.