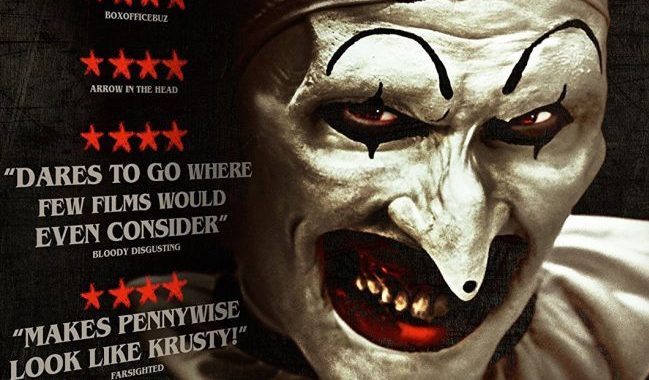 Over recent years, clowns have become conduits for nightmare creatures, villains or bogeymen. Most obviously of course there are the two It! films (1990 and 2017) based off the Stephen King novel, the Killjoy films, the laughable Killer Klowns From Outer Space, Blood Harvest (both 1988), Funland (1987), Stitches (2012) starring Ross Noble, Eli Roth’s Clown (2014), Jigaw in the Saw franchise and who can forget the scary toy clown in Tobe Hooper’s Poltergeist (1982)? In the black comedy TV series, ‘The League of Gentlemen’, the blackface clown, Papa Lazarou surely is one of the most terrifying characters in the show if not ever brought to a TV screen? Meanwhile, in the real world a series of people dressed in clown costumes were terrorising and chasing people in the streets across the world in the USA, Canada, the the United Kingdom as well as other areas in Europe.

Released by Signature Entertainment, Terrifier (2017) is the latest in the spate of clown horror films, starring the spin-off of the character of Art the Clown in the anthology film, All Hallows Eve (2013), the first film by the same director, Damian Leone. Be under no doubt though, few horror films come as nasty or as gory as this. Were it made in the 1980s, this film would have almost definately gone down as a ‘video nasty’. The plot is simple but unexplained. It is set on Halloween night and two party going girls go to an all night diner after attending a party. Also sat in the cafe and staring at one of the girl’s, making her feel uncomfortable is a masked character in a malevolent grinning clown costume. Her friend sits next to the clown and (mistakenly) mocks the clown figure with a selfie. After they leave the clown bludgens the cafe worker’s to death after he has smeared the toilet with excrement, decapitating one of them. The girls stop their car and find themselves in a building where Art the Clown terrorises them and keeps other victims he has brutally tortured or is yet to butcher.

Terrifier will make the most hardy of horror fans drop their jaws in a “I can’t believe what I just saw” moment let alone shock the pants off anyone with coulrophobia, a moniker it wears on its sleeve. It would not be giving too much away to say that the scene in which Art literally saws a girl in half from genitals to head is beyond even the most clear torture porn movies such as the Saw or Hostel franchises. The acting is for the most part is pretty lame and that Art’s quarry are pursued around warehouses and boiler rooms feel like something of an old chestnut. Cudos has to be given to David Howard Thornton’s performance as Art the Clown though. Unlike the blank personalities of Jason Vorhees or Michael Myers and, despite the mask Thornton moves more like a mine than a clown and is still able to give an evil grimace and apparent expressions. To go further he even makes Freddy Kruger friendly.

The gore and bloody violence of the film acts as a homage to old school grindhouse horror, but there is a definate impression that both All Hallows Eve and Terrifier are the start of a new icon and horror franchise, even if it hasn’t yet become cult. Extras include a trailer and a Making Of featurette.