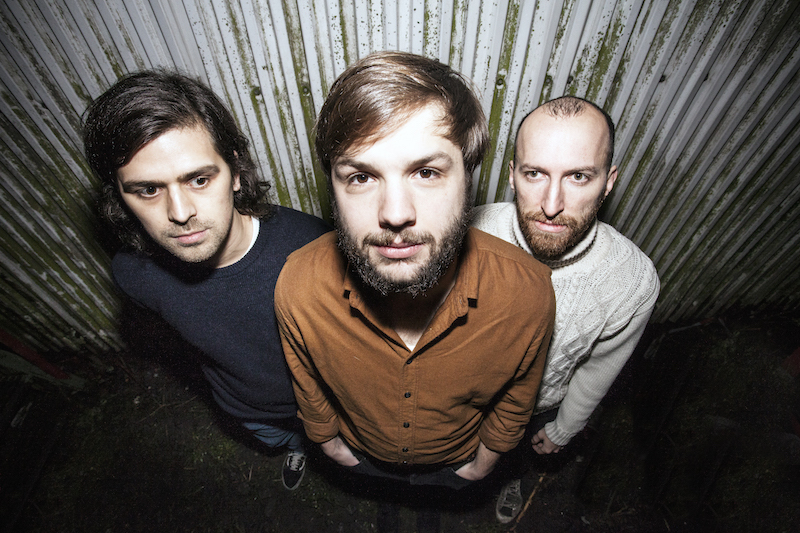 Singer Bert says the new song “Mercury” is about falling back into the bad habit of procrastination. “You have big plans, but you’re not getting anything done. Because you’re just too scared to get things started. So you just leave it and go out. And hate yourself for it.”

The video is made up of old footage from guitarist Joram’s family. “My family has all these videos going back to the 60s and the 70s. I’ve had the idea of using them with a song for some time, but ‘Mercury’ is the first one where it fits”, he explains. “I made the video chopping up an evening-long recording of my great-grandparent’s 40th wedding anniversary in 1975. It’s especially fun to watch my own grandparents drinking and dancing way back before I was even born.”

Teen Creeps are a trio from Ghent. You may know drummer Ramses Van den Eede from weirdo rockers Hypochristmutreefuzz, singer-bass player Bert Vliegen from the slowcore bands Sophia and Horses or guitarist Joram De Bock from the former hardcore formation Deadender. But what the three do in Teen Creeps is something quite different.

They combine a mixture of alternative rock from the ‘90’s and punk that sounds both solid and melodious. The band itself describes its music laconically as ‘post-everything’, but you can clearly hear the influences of nineties bands Sonic Youth, Dinosaur Jr. and Jawbreaker. As well as those of contemporary bands like Cloud Nothings and Yuck.

“In fact, we usually play indie rock, but the kind of music to which the term originally referred in the ‘80’s and ‘90’s. That of bands like Superchunk and Archers or Loaf: guitar rock at the boundary between punk and melody. Not because we are nostalgic, but because we identify with the sound of that time. It is solid and energetic, but also melancholic and embodies lived experience. That is something that we are also striving for ourselves: it may ‘rock’, but we always put a lot of feeling into our music.”

Since its formation five years ago, Teen Creeps has performed as many shows as possible at home and abroad, appearing on stage at renowned festivals in the Benelux as Rock Herk, Absolutely Free Festival and Incubate. And playing clubs in Germany, France and Great Britain.

After an EP (2014) and a 7” (2015), Teen Creeps began work on their first full album. Their previous releases were all recorded in the rehearsal room, but for ‘Birthmarks’ they recorded in a real studio for the first time. The band went to London, where they worked with the producer Rory Attwell (Veronica Falls, The Vaccines, Yuck) at Lightship 95. A studio on a lightship anchored in the Thames.

“We got to know Rory when we were the opening act for his band Die! Die! Die! When it emerged that he had also worked as a producer on records of which we were fans, to us it seemed the perfect match. And indeed it was! The studio itself was a further reason for going to London. Because recording on a big, red boat naturally appeals to the imagination”, says guitarist Joram.

Through nine numbers, Teen Creeps adheres to its mixture of fuzzy guitars, melodious vocals and energetic drums on ‘Birthmarks’. But at the same time, the band also pulls out all the stops. ‘Sidenote’ opens strongly but is quickly followed by the poppy ‘Hindsight’. On ‘Mercury’, the bass guitar comes to the fore, and in ‘Good Intentions’ the tempo slows for the band’s best number so far. “We have tried to do new things within the framework in which we work. We remain true to ourselves, but we do not want to fall into repetition either”, says drummer Ramses.

Textually ‘Birthmarks’ has become a personal record, singer Bert explains. “It is an album about frustrations, shortcomings and disappointments. About misplaced hope and false expectations, about people hurting and being hurt and not being able to deal with it. Very personal for me, but that is something that I have learned with Teen Creeps: to make myself vulnerable in my texts. ‘Birthmarks’ contains the most honest lyrics that I have ever written. The title refers to events that you carry with you for the rest of your life, whether good or bad. Just as a birthmark is not necessarily beautiful or useful, it is forever.”