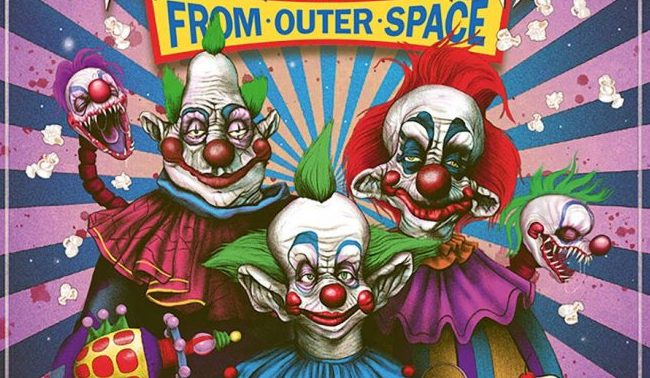 The 1980s were full of crazy, zany and eccentric films and few were as eccentric or zany as Killer Klowns From Outer Space (1988). The film’s premise and title are as ridiculous as they sound. The basic story has smooching teenagers on a lovers lane witness what at first seem like a comet land nearby. A couple of the teens go and investigate, as well as an obligatory farmer (Royal Dano) who is immediately zapped by unseen aliens. (It all sounds like standard 1950s drive-in stuff so far.) When Mike Tobacco (Grant Cramer) and his girlfriend Debbie (Suzanne Snyder) find the flying saucer they see something that resembles a circus tent in bright and yellow stripes. The interior of the craft is little different, although they now find themselves in an outer world labyrinth when they are surprised by one of the ‘klowns’ that chases them blasting them with a popcorn blaster. Naturally the police don’t believe the teenagers that there are killer klowns wrapping their victims in cotton candy and blasting people with candy guns, not least of all the local police chief (played by John Vernon, best known as the principle in Animal House, 1978).

The clowns come out of their rocket ship cum circus tent and start blasting at the locals in ingenious ways, drawing in their victims with shadows puppets and covering them with candy and popcorn. Maybe it’s up to the teenagers to stop these alien killer klowns. Yup, a crazy film. The biggest influence for this film was surely the sci-fi drive-in classic, Invasion of the Saucer Men (1957) in which a lover’s lane full of randy teenagers is upset by aggressive cabbage headed aliens (they were also parodied in Tim Burton’s Mars Attacks, 1996). Killer Klowns, meanwhile, was not a success on its release but became one when released on VHS, guaranteeing it’s cult success. Even in the same year as its release, ‘Doctor Who’ (under Sylvester Macoy’s incarnation) became influenced by the film in Season 26 stories ‘The Hapiness Patrol’ and ‘The Greatest Show in the Galaxy’.

The horror is jokey and what is clear from the start is that at no point does this film take itself seriously. Indeed, even some of the special-effects are even laughably bad, but the viewer can’t help but feel that the film’s makers, the Chiodo Brothers are deliberately minimal with the sets like a twisted world of Willy Wonka. With each situation the klowns appear seems to involve the brothers having fun with the material and finding odd ways to introduce comic deaths as though from a toy factory. It’s all a coulophobic’s nightmare.

This is the only films the Chiodo brothers have made (although they have announced a ‘Return of the Killer Klowns’) they they have made a couple of short animated stop motion films (included in the extras) and created the monsters for films such as Critters (1986). The Blu-ray release is awash with extras from the usual stuff such as bloopers and outakes, auditions and interviews among other extra material. The acting is dreadful, the production values of poor quality and while the special-effects are obvious, the film is never the less out there and incredibly bold and conceited. Although originally released as a steelbook by Arrow Video in 2014 it does look impressive with its 4K scan.