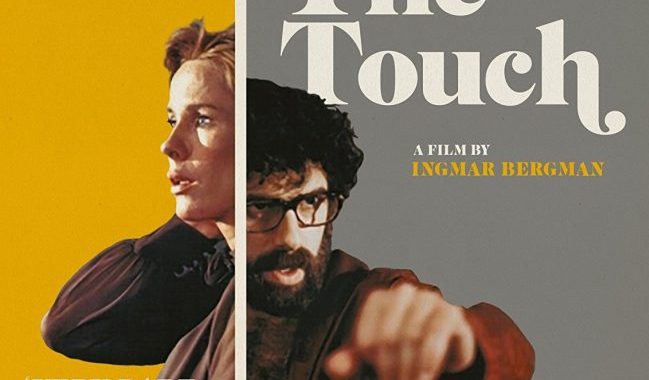 To celebrate BFI’s widely publicised retrospective of the career of Ingmar Bergman BFI have released two of the lesser known films by the celebrated Swede. One is Bergman’s take on The Magic Flute (1975). The other is a drama from 1971, The Touch. In his introduction essay in the accompanying booklet to the dual format release, Geoff Andrew talks about the misconception of Bergman as the “terminally gloomy Swede” who focuses on the existential crisis and God’s silence. While there are clearly elements of this at play in many of Bergman’s films it would be false to reduce his oeuvre in this way. Bergman has always had an airiness and positivity to his work too when we think of the teen romance in Summer with Monika (1953) and even the elderly man who reflects on his youth while travelling with young people in Wild Strawberries (1957).

The Touch is a film that is in many ways a mark or typical film of the direction the director was heading towards by the early 1970s. It is a simple tragi-love story with just three principle characters. Karin Vergerus (Bibi Andersson) is a seemingly happy ordinary middle-class housewife living in a town outside Stockholm. She is married to the reliable Andreas (Max Von Sydow) and the decoration of their house highlights their good taste. It opens with Karin visiting hospital to see her mother for the last time as she has passed away. She is introduced to David (Elliot Gould), an American archaeologist whom Andreas has recently befriended. A short while later and quite by surprise for Karin, she and David begin an affair. This is neither a casual affair nor a particularly healthy one (is there such a thing?). It soon becomes clear that David, out of jealous or childish piques of rage is quite abusive, leaving Karin confused, deceiving and often hurt by the on/off affair that threatens to de-stabilize her marriage.

With A Passion (sometimes misleadingly titled The Passion of Anna, 1969) Bergman’s films almost exclusively focused on human relationships and marriages here on in (The Magic Flute and The Serpent’s Egg, 1977 were different to that extent). He faced a series of tragedies in the late 1960s and 1970 when in a short space of time his long-term marriage dissolved, the deaths of his 3rd wife and his father and the disolution of his relationship with his regular actress, Liv Ullmann (although she continued to star in many of his films). Some of this would explain the cynical edge to The Touch in which affairs, death of a parent and marriage breakdown seamlessly feature prominently in the film.

Bergman himself has often spoken about how he was wholly disappointed in this film. I wonder how much of this was to do with most of the film being shot in English and the release available in the UK and USA in English only? The version released on this disc by BFI is in the preferred version; in other words the interaction between the American and the rest of the cast is in English, while that between the Swedes is in native Swedish. Bergman had been under much pressure to work in Hollywood and he rightly refused. This in a sense was his compromise in that it was the first time that he used a Hollywood name having seen Gould in Getting Straight (1970) and was co-produced by the American Broadcasting Corporation. Allegedly Gould was quite demanding that English was used throughout as were ABC. This would explain Bergman’s antipathy towards this film and why he never made any future films outside of European control. He did, however, work with another Hollywood actor, David Carradine in The Serpent’s Egg.

It is right that The Touch is re-evaluated and looked at in a new light. Despite English being the main language in the film, it is in every other way a distinctive Bergman film and very little seen (this is the first time it has been made available on home media in the UK). I first saw this film some years ago at a retrospective of the director’s work at the Filmmuseum in Munich and was pleasantly surprised by it. One of its faults is that Gould’s character of David is almost like a villain of the piece, a completely unlikeable character – childish, conceited and selfish. His passion for Karin borders on rape and as a viewer we are frustrated as to what she finds so attractive about him as a person. He is a slob and seems to demonstrate few redeeming qualities. No accounting for love I guess. Andersson’s Karin and Von Sydow’s Andreas are their usual reliable selves. Bibi Andersson was the other half to Liv Ullmann in Persona (1966) and a regular of Bergman’s. Von Sydow, perhaps the actor most associated with Bergman and appeared in no fewer than 12 of his films. He is also one of the best actors to play a cuckold and is in no way a second fiddle or a third wheel. Woody Allen recognised this and used him to good effect as the cuckolded lover in Hannah and Her Sisters (1986). The cinematographer on the film was another Bergman regular, Sven Nykvist who would also go on to be a regular of Allen’s.

Extras on the disc include an interview with Liv Ullmann about her career with Bergman held at the BFI Southbank earlier this year, an interview with Sheila Reid who plays David’s sister in the film. She is the only British actor to have appeared in a Bergman film. The other extra is an hour-long documentary and interview with Bergman made by Stig Björkman about his career and filmed during the making of The Touch.