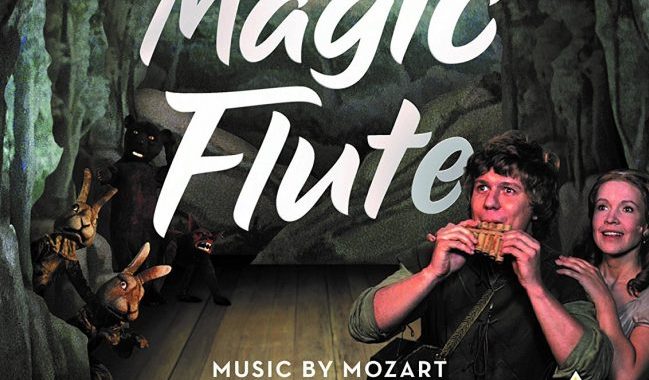 This film is in many ways one of Ingmar Bergman’s most unusual films for a number of reasons. It is a filmed version of one of Wolfgang Amadeus Mozart’s most beloved operas and is much lighter in tone than most of the great filmmakers often deemed gloomy, existential dark night of the soul dramas that he is best known for. Made in 1975 and made for TV, The Magic Flute is one of the director’s least seen films, in Great Britain at any rate but is still popular in its home country of Sweden. It has been released as part of the BFI’s 100th anniversary of the birth of Ingmar Bergman and following the recent retrospective of his films shown at the NFT.

The film is a mostly fairly traditional translation of Mozart’s opera in both presentation and style. The director has put the opera on the stage, re-creating the Vienna Opera House on Stockholm’s Drottingholm theatre and gives off some 18th century class. The film opens with the overture in which we see the faces of those viewing the opera from their seats, the expressions on the faces edited to the music. Among those that can be seen in the audience include Bergman’s acting friend Erland Josephson, his then current wife, Ingrid von Rosen, cinematographer Sven Nykvist and former lover and film regular Liv Ullmann. The music was recorded and the actors mime the music. This is an opera that acts as a paean to music and has in many ways a joie de vivre about it, absent in much of Bergman’s other work.

The story is a fantasy, something Bergman has rarely steered towards on film, but Bergman was a big lover of opera and this was one he wanted to bring to the screen for many years. The director rises to the challenge in bringing that magic to a theatrical stage. The story is both complex and simple and was in many ways Mozart’s ‘A Midsummer Nights Dream’. In the story the Queen of the Night has Prince Tamino to rescue her daughter, Pamina from wicked High Priest Sarastro with music being one of the protecting forces from the manipulative Papageno. It is sometimes hard to follow, but is very easy to enjoy. Bergman reminds us from time to time that this is an opera production, in spite of the fact the Queen’s mirror has a projected face on it and other fantasy conveits such as the magical snow. Elsewhere he allows us to see the performers waiting in the wings.

This film is a joy to watch and in some ways not far removed from the style of Michael Powell’s The Tales of Hoffmann (1951) and like that film also has elements of kitsch. As ever, as one would expect from BFI there are some very interesting contextual extras from the archives, including Lotte Reininger’s 1935 animated film Papageno using silhouette figures to Mozart’s music. There is also a documentary made in 1938 following Mozart’s footsteps in his birth town of Salzburg. This travelogue is fascinating for a number of reasons, not least of all for the fact that this short was filmed months after the Nazi Anschluss of Austria and we see many Nazi flags flying on the bridges over the river Salzach. Another drama documentary, On Such a Night (1955) and directed by Anthony Asquith follows an American tourist travelling from London Victoria to Glyndebourne to see a performance of Mozart’s ‘The Marriage of Figaro’.