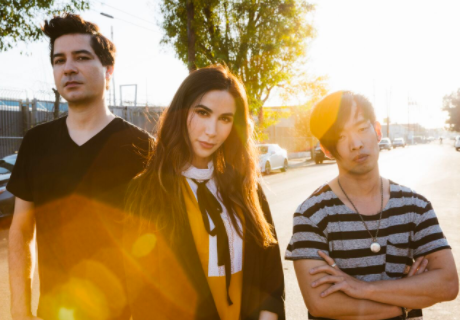 Speaking on the new video singer Sara Coda says ‘Joz started sketching “Just One Voice: in a hotel room in Colorado. I remember hearing it for the first time and dropping everything else that was in process and focusing on it because I loved the melody. It was such a fun song for me to sing and I wanted it to be something that would make others want to sing too.

As a band, we choose to reject the belief that we’re living in a messed up world. We love this world, despite its faults. We realize that we have to take responsibility for this world that we’ve created, and with that responsibility comes the power to change it. I see people working to change the world for the better every day. This song is for that army of people.’

Their debut album has quietly sent shockwaves far beyond West Hollywood, where the band are based, with international radio tastemaker KROQ repeatedly playing the DIE A LITTLE single, and press acclaim coming from all quarters. Frequent touring throughout the USA, including shows with the likes of Thrice and Dreamers, has spread the word further.

“Initially, we bonded over how important it was to make quality music and succeed at it,” says Sara. “From the beginning, it was all about how driven we were, how passionate we were, and how much time we were willing to set aside for music.”

“There’s a great chemistry,” agrees Joz. “I write the music and the melodies, Sara writes the lyrics and Yutaka adds his own elements. As a leader, Sara has so much energy and an almost mystical side to her that you don’t see in other people.”

Matt Wallace [Maroon 5, Sugarcult, Faith No More] instantly caught onto that and produced the debut album with Neil Avron [Twenty-One Pilots, Blink-182] mixing. With a rush of acoustic guitars; waves of monstrous rhythms; the occasional surf-twang that wouldn’t sound out of place on the Pulp Fiction soundtrack; full speed galloping guitars; unmistakable chants; and, of course, Sara’s skyscraper-sized vocals, SILENT RIVAL mesh their styles into a sound that could only be them.

As the band prepare their second album release for later this year, their chemistry should solidify their rising status among modern rock’s vanguard.

“We’re not trying to sell or push anything,” adds Sara. “We don’t want to tell you what to think, what to believe or how to live your life. It’s just music and, hopefully, you enjoy it. We know that we do, and we will continue to regardless of what others deem success to be.”

“It’s really cool that this band has brought together people from different backgrounds to create something unique,” concludes Joz. “The fact that we get to travel around together and play shows together, there’s nothing more fulfilling than that.”