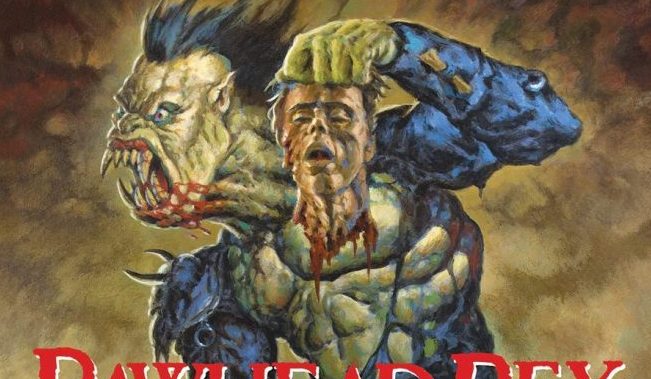 Released by Arrow Video on a shiny new 4K restored version that has also extended the edges from the 4:3 aspect ratio when it was more commonly seen on video to the proper full screen. Rawhead Rex (1986) was one of those must see films when it was released on VHS in the mid to late 1980s and can be appreciated at a different level today.

Set in Ireland (and shot in County Wicklow), the story has an American tourist, Howard Hallenbeck (David Dukes) and his family arrive in the “land of his ancestors” to study local history. He visits the local parish church to see the town records regarding items of religious significance. Meanwhile, some local workers are removing an ancient stone column when lightening strikes and an 9 foot demon is awoken. Hallenbeck comes across the church’s verger, the rude Declan O’Brien (Ronan Wilmot), who directs him to Reverend Coot. The demon that has awoken is an ancient local myth called Rawhead Rex (his image even appears on the church’s stained glass window) who proceeds to stalk the countryside, mauling and killing anyone he comes into contact with. His first victim is a farmer, but leaves the farmer’s wife alone when he realises that she is pregnant. He then attacks and slashes people at a campsite. The police are sceptical of the descriptions of the murderer and when Hallenbeck’s son (Hugh O’Conor) is killed by the creature this sets him on the trail of the beast himself.

The 4K restoration almost seems to give an extra dimension to the film. Yet, while the prosthetics, blood and guts and severed heads look good with none of that bright red paint that seeped through horror films in the 1960s and 70s. Where the film vastly fails though is with Rex himself. Played by big fella Heinrich von Bünau, the head seems to wobble when Rex moves and lumbers and has none of the gait that Karloff say would bring to his Frankenstein monster, while the grisly face is best served on Arrow’s cover artwork than the wart hog head of the creature on film, only highlighting its silliness on the newly restored version. An early choice for Rawhead was Peter Mayhew (Chewbacca) who may have served better as a more experienced costumed actor. The close-up shot of Rawhead where he hypnotizes his victims are particularly poor. Nevertheless, the Irish locations and the good vs. evil storyline works well.

Directed by George Pavlou who has only made a couple of features, the film is perhaps best known for being an early written effort from Clive Barker, who only the previous year had written the script for his first horror feature, Underworld (also directed by Pavlou). Although Barker wrote this he was famously very dissatisfied with the results leading him to have much closer control of his next film, Hellraiser made the same year, which he also directed. But Rawhead Rex is not without charm or style. Yes, the beast is seen a little too much taking away much of the suspense and only exposes the inadquacies of the make-up design, but its Irish locations lends itself well to the mythology, some wonderfully cliched coppers and best of all Wilmot as the verger and sycophantic servant of Rex who at one point is seen being urinated on by Rex who is marking him. Wilmot comes into his own near the end of the film as he laughs hysterically as Hallenbeck and the priest (Niall Toibin) try to stop him.

The extras, as usual with Arrow Video and especially for those films that have a strong cult following such as Rawhead Rex (the title alone should be a draw!) are plentiful, looking at and celebrating that cult following. One of the extras is a passionate interview with artist Stephen R. Bissette on the aborted ‘Rawhead Rex’ graphic novel adaptation, as he discusses why the film and Barker’s story was such a draw to him. There is also an (audio only) interview with Pavlou which gives an interesting insight into the development and the making of the film (while showing some interesting stills of the film). In addition there are interviews with Wilmot who plays the mad verger, the children of the tourists, now established actor Hugh O’Conor and Cora Venus Lunny, as well as Colin Towns, the film’s composer. As well as a myriad of other extras there are also commentary tracks by Pavlou and The Hysteria Continues.