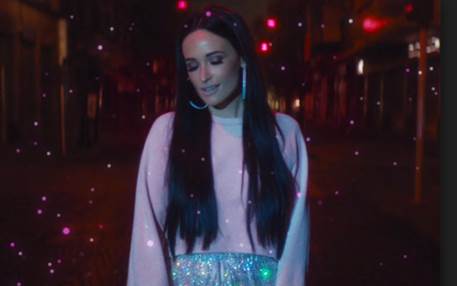 Following the release of her “Space Cowboy” video earlier this week, Kacey Musgraves shares the video for “Butterflies.” Shot in Mexico City by “Space Cowboy” director Courtney Phillips, the visual captures the magic and thrill of falling in love.

“Butterflies” was released to rave reviews, with NPR proclaiming it as “stepping easily beyond any genre category with a sunny sense that this is just where country should be these days.” The track is featured on Kacey’s critically-acclaimed new album Golden Hour, her third #1 debut on Billboard’s Top Country Albums chart. Golden Hour has been praised by everyone from NPR, Time, Rolling Stone, Billboard, Pitchfork, and The FADER, among others, with USA Today declaring “Golden Hour may be 2018’s best album yet,” and The Huffington Post calling it “the work of a self-assured artist breaking the mold instead of the younger version telling us that one day she would.”

Kacey will tour extensively through 2018, joining Harry Styles as direct support on his major summer tour, including 2 nights each at New York City’s legendary Madison Square Garden and Los Angeles’ iconic The Forum.

In addition to her significant touring presence in the U.S., Kacey continues to break boundaries as one of the most successful country artists in Europe, selling out a headline show at London’s Royal Albert Hall during her last album and headlining this year’s C2C: Country to Country Festival at London’s famed The O2 Arena, 3Arena Dublin and SSE Hydro Glasgow.

Kacey has also announced a UK headline tour in October and November 2018, including a date a London’s Wembley Arena.