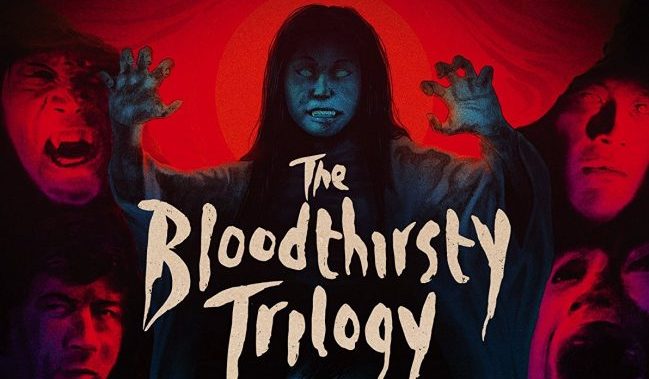 When I was a boy I owned several illustrated books on the history of horror cinema written by Alan Frank. These books were my gateway into the wonderful world of horror cinema. In one of those books there was a still from Lake of Dracula, a Japanese vampire film very much made in the vampire tradition, but with little in the way of an explanation given. What a treat then that this and two other Japanese vampire films are released by Arrow Video in what have been titled The Bloodthirsty Trilogy. All three films were directed by Michio Yamamoto, a director little known who directed only a small number of films as well as this trilogy.

Made by Toho Pictures (famous for making all the Godzilla monster films at the time), the first film in the trilogy goes under the rather un-PC title, The Vampire Doll (1970). In this film a girl goes looking for her brother who has been missing for almost a week since he went to see his intended in the country. The girl and her boyfriend travel to the girl’s spooky run down mansion and feign the car breaking down as they are suspicious of the missing girl’s odd mother. They learn that her brother’s fiancee had been killed in a car crash before the brother’s arrival yet she has been seen walking around in a nightgown. Her grave is also empty.

The next year, The Lake of Dracula (1971) was released which had a Dracula figure, if not Dracula himself, as he terrorizes a pair of sisters staying by the lake having already influenced the gardner of one of the sisters, a very Renfield type character who tries to rape her. This sister suffers and has suffered nightmares since childhood before the vampire makes himself known. Evil of Dracula (1974) is in many indistinguishable from the previous film with its main distinction being that it is set in an all girls school (a less lesbian version of Hammer’s Lust for a Vampire, 1971, as Kim Newman notes on the extras). Both films, as with The Vampire Doll have a blend of that wonderful atmosphere and gothic quality of a Mario Bava film with some Roger Corman Edgar Allan Poe elements thrown in for good measure. A very Western hybrid set of films you might say.

Two of the films have Dracula in the title but Dracula does not appear in either but instead there is a Dracula-like figure in these two titles. Made in the early 1970s and pre-dating Hammer modernising the Dracula franchise with Dracula A.D. 1972, the first of the unconnected story trilogy is more likean un-lesbian Daughters of Darknness (1969) than Hammer with its atmospherically odd story in an old gothic house (rather than a hotel) while the next two are more like Count Yorga than Dracula but still maintains the tropes of a good Dracula/vampire story but minus much of the Christian iconography – crosses and holy water for example. Generally these films are more Western in their style than Japanese with plenty Mario Bava atmospherics thrown in, although there is still some Japanese or what became popularly known as J-Horror in there. Think of the white faced ghosts in The Grudge films and that look is similar on the ashen white faces of the vampires. Japan has a history of interesting horror films, but the look to the West is a little different, if not unprecedented. The best known Japanese horror films pre-dating these films are Onibaba, Kwaidan (both 1966) and the wonderfully atmospheric Kuroneko (1968), but these are distinctly Japanese in tradition with little Western influence.

These films are not ground breakers or add anything new or different to the horror film, but are an addition to the glut of vampire films that appeared in the early 1970s. The trilogy looks superb in High Definition (1080p) and as well as trailers for each film there is an appraisal of Japanese vampire films by horror film expert and critic, Kim Newman.