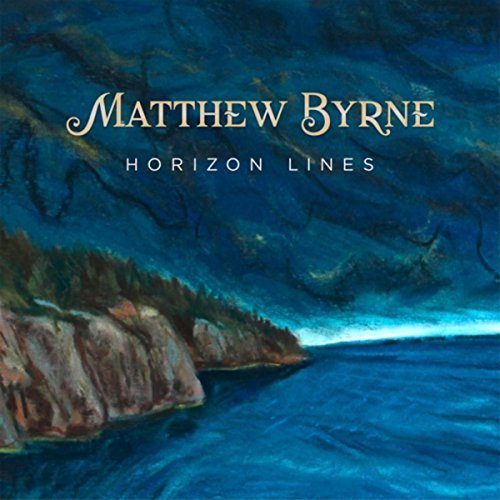 Horizon Lines is the third album from Canadian traditional folk singer Matthew Byrne. Originally released in his homeland last year, this mellow collection of eleven lovely songs is now being released in the UK. It is nicely presented in a gatefold CD sleeve and comes with a booklet explaining the background to each song.

Matthew Byrne comes from a musical family and grew up steeped in traditional music. The Newfoundland native has a natural knack for telling stories and this collection containing both original songs and new interpretations of old ones shows his talents off well. In fact, his songwriting is so good that the old and the new fit together seamlessly.

The arrangement of most tracks on the album is sparse, with only some delicate and melodic acoustic guitar work weaving between the words. Byrne’s voice has restrained power and a deep tone that adds weight to his words. And on two tracks he sings without accompaniment to fine effect. The Woods Of Traugh, an old Irish love song set against a background of seventeenth century war, is hauntingly beautiful while Jim Harris tells of a tragedy at sea, its sense of loss compelling.

Of the traditional songs, the opening Long Years Ago stands out, a sea song with lovely harmony vocals. Adelaide, written by Byrne, is a tale of lost love told simply yet powerfully, and it’s based on a true family story. The instrumental Wedding Waltz, written for Byrne’s own wedding, sits somewhere between folk and bluegrass. It features some lovely dobro guitar playing and is both emotional and highly melodic.

Horizon Lines is an album with clear appeal for fans of traditional folk music. There is a strong Irish influence as well as the obvious traditional Canadian core, and Byrne’s ability to fuse it all into his own style shows great creative skill. But the quality of the performance throughout the album makes it one that should also have a much wider audience.