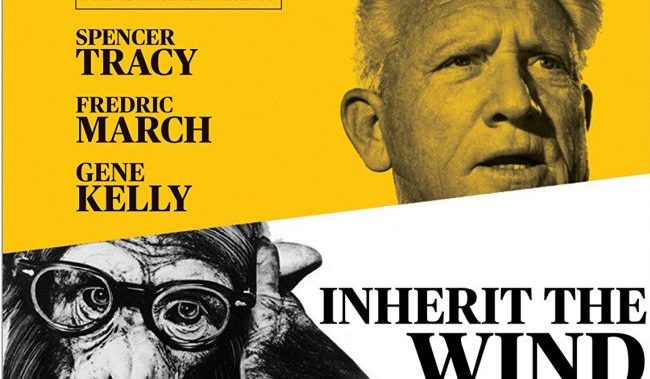 Released in dual format by Eureka! and made in 1960, Stanley Kramer’s Inherit the Wind was based off a long running Broadway play written by Jerome Lawrence and Robert E. Lee (no not that one) centered around a trial that took place in Tennessee in 1925. Although the location, all the character names and some of the facts have been changed, the basic premise of the film fits. What is apparent on seeing the film though is how hard hitting and controversial it is, especially in its clear opinion on religious fundamentalism. Anyone familiar with the United States would be aware how parts of the USA still have these strong religious beliefs; there is even a Creationist Museum in Kentucky

The setting of the film is small town Indianapolis, a made up town called Hillsboro. A high school science teacher, Bertram T. Cates (Dick York) is teaching Darwin theory and evolution at school. After and during the credits rolling (to the theme of ‘(Gimmie dat) Old Time Religion’ which runs as a motif through the film) a group of town officials and locals led by the Reverend Jeremiah Brown (Claude Akins) march in on Cates’s class and stop it. Cates is arrested for breaking the law of the State by not teaching Christian Creationism. The upcoming case soon becomes a nationwide media hype. The town officials invite in Matthew Harrison Brady (Fredric March) to prosecute for the State and is greeted to the town as a hero, Brady is also wanting to run for President (as did the prosecutor in the original case). Brady is also a religious fundamentalist and self-professes to being an expert on the Bible. For the defense, Chicago lawyer Henry Drummond (Spencer Tracy) is given a less than rapturous welcome. Championing Drummond is an agnostic newspaper man, E.K. Hornbeck (Gene Kelly), while caught in the middle is Cates’s fiancee, Rachel (Donna Anderson) who also happens to be Rev. Brown’s daughter.

In the stifling summer heat, the trial becomes known as the ‘monkey trial’ with the fundamentalist town and even the State stacking the odds against the defense. The rest of the film is made up of the clever every-man of Drummond facing obstacle after obstacle in being able to fairly carry out their defense; putting up experts and using Darwin theories are disallowed for the defense. The film is not impartial and clearly pins its colours on the side of humanism and science. This was, and still would be in some parts of the United States, controversial and credit must be given to Kramer for pushing the film’s politics forward. In addition, the film (and the play) was a thinly veiled attack on McCarthyist America and the wider political fundamentalism that existed in America at the time. Kramer would also tackle racism in The Defiant Ones (1958) (also soon to be released by Eureka!) and Guess Who’s Coming to Dinner (1967).  The casting of Kelly as the reporter, an actor who had done some straight drama, non-musical roles and was a fairly brazen piece of casting as Kelly had known socialist views and had been ‘greylisted’ under McCarthyism.

This film is also an acting tour de force from both Tracy and March. March had been a handsome leading man in the 1930s and of course Tracy always delivered as a man of great wisdom and humanity in every role he played from the Stranger in Bad Day at Black Rock (1955) or as the Judge in Judgment at Nuremberg (1961) gives a reliable standout performance. Meanwhile, March, with every bead of sweat on his forehead and face visible on the high definition picture, gives a wonderfully edgy performance as the fundamentalist, especially towards the end of the film. But it is Tracy who has some of the best lines and speeches.

The townsfolk of Hillsboro are completely contrary to the more typical Hollywood image of period apple pie small town America. As as a collective the townsfolk are not the good people in a John Ford movie, a Doris Day film, the townspeople in a Frank Capra comedy or the good family and neighbours of Meet Me in St. Louis (1944). The people in Hillsboro are none of these. They are religious fundamentalists and bigots who are actually calling for the hanging of Cates and tar and feathering Drummond, while stopping short of a being a lynch mob. Under these circumstances it would seem that there is little chance or hope for justice.

As a courtroom drama this is one of the best you’ll ever see and is beautifully filmed by Kramer, especially in the courtroom. The cameras constantly travel between close-up and mid-range shots making the trial, to all intents and purposes a national media circus (including a radio mike during the final verdict) more intimate. It is an almost perfect film and is Kramer’s best film. It is only marginally let down in its final scene in which Tracy’s character launches a tirade at Kelly’s character and shows signs of some kind of concession to religion in America and to the rest of the film doesn’t make much sense.

This is a handsome and good looking package and film. Other than a trailer, the only other extra is an interview with film scholar Neil Sinyard.