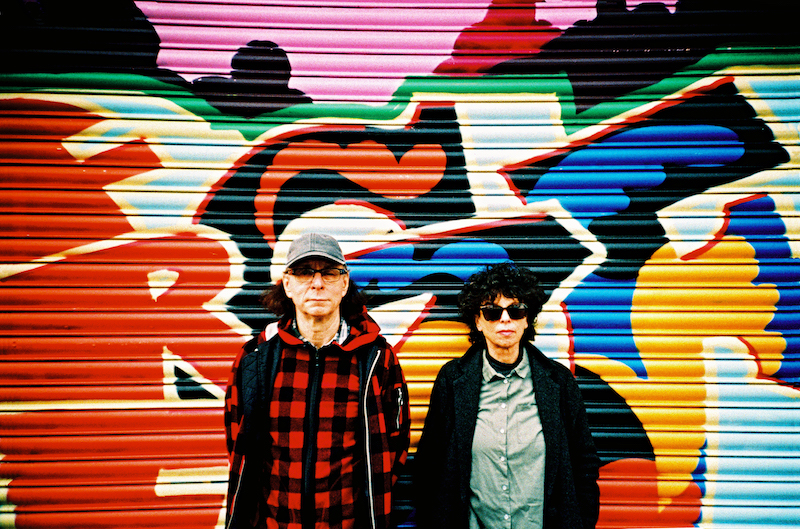 Made up of Wire frontman Colin Newman & Minimal Compact’s Malka Spigel, Brighton-based duo Immersion are sharing their new single & video “Propulsoid”. The band are set to release their new album ‘Sleepless’ on June 15th via swim~.

Speaking about the new track, the band said “The roots of Immersion lie in abstract techno but somehow over the years we’ve acquired the motorik of krautrock without ever consciously deciding on that direction. “Propulsoid” is a kind of propulsive mythical beast, an unholy alliance of Klaus Dinge’s beats and acid squelch filtered through the ever-present MS-10. We guess it’s a kind of dance music!”

“The video was made by us in the same spirit as we make the music and write these words. It’s about speed, light & repetition.”

Sleepless is at once a logical development from previous album Analogue Creatures Living On An Island and a huge leap forward. Although the influence of German krautrock pioneers like Tangerine Dream and Popal Vuh is still detectable, Immersion have evolved their own far more personal sound. Their amalgam of fascinating textures and limpid melodies gives their compositions an irresistible appeal.
While warmly percolating analogue synths remain at the heart of Immersion’s sound, Sleepless finds their sonic palette broadened to encompass guitars, drums, and bass. There’s a guest appearance from Matt Schulz of Holy Fuck, too, and a collaboration with Gil Luz and Asi Weitz of EBM band Hexenschuss. For a duo who once titled an album Low Impact, this is most definitely Immersion in high-impact mode!

Album opener ‘”Microclimate” is a bright, optimistic composition with shades of Ulrich Schnauss in its thoughtful, melodic flow. “Off Grid” kicks off with the infectious sound of a four-string tenor guitar, but it’s soon joined by flickering synth-lines and one of Spigel’s characteristically spacious bass-lines. In fact, Spigel’s bass work throughout the album may be the finest she’s ever committed to tape.

Just as you think you might be getting the measure of the album, the title track opens with a richly melancholic brass arrangement. But this is then eclipsed by an Eastern-sounding melody and strangely circling guitar line. Like all Immersion’s best work, it’s simultaneously mysterious and emotionally engaging.

“Propulsoid” has the kind of urgent electro-glide that might suggest Moon Duo or Suicide, but the core melody is unmistakably Immersion. The strict yet fluid drum pattern comes courtesy of Matt Schultz of Holy Fuck, who provides the track with a strong motorik drive.

“Manic Toys” is another distinctly up-tempo track, which comes across as a weird deep-space hoe-down, while “Seeing is Believing” begins with dark synth tones suggesting we might be listening to the soundtrack to an early 1970s dystopian sci-fi film. But as the piece evolves, there is something of the bucolic splendour of Boards of Canada to be heard in the cycling rhythm and rich drones. Album closer “Io” sees several looping celebratory melodies overlaid to create a mesh of sound that is elegiac and uplifting.

Sleepless is widescreen music – lush, detailed and smartly executed. In short, Immersion have produced an album that politely but firmly demands your attention.

As well as a North American tour with Matt Schulz from the amazing Holy Fuck guesting on about half of the shows, there will also be a ‘pre-tour’ Nanocluster, a regular night the band have created, where the Immersion perform a 30 minute set, followed by a guest 30 minute set and then a collaborative 30 minute set at the end. This upcoming Nanocluster on June 8th will take place in Brighton with Ulrich Schnauss as their guest/collaborator.