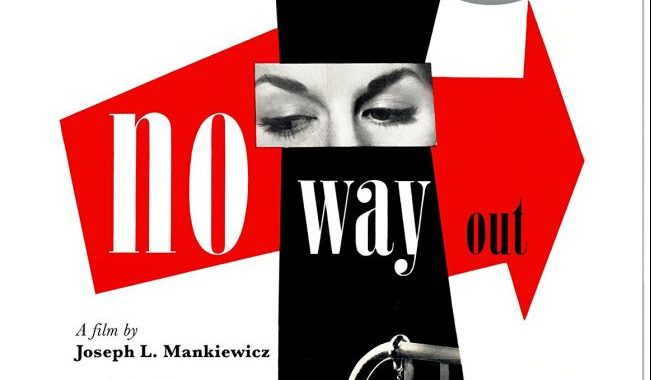 In the post World War II there were a number of films that tackled the subject of racism in the United States. This went up to and after the Civil Rights movement in the 1960s. In many senses the USA took part in a war that was fought in part on grounds of racial genocide, both in the European Theatre and the Japanese one. One of the leading actors who appeared in many of these films dealing head on with racism was African American actor Sidney Poitier with such films as The Defiant Ones (1958, also soon to be released by Eureka Entertainment), A Raisin in the Sun (1961), A Patch of Blue (1965), In the Heat of the Night, Guess Who’s Coming to Dinner (both 1967) and The Wilby Conspiracy (1975) (set during Apartheid). No Way Out was the first of these films. Watching the film today with a modern eye, the language and hatred towards African Americans seems stronger than ever, retaining the films power.

In the film Poitier plays a resident intern doctor, Dr. Luther Brooks who is on duty when a couple of n’er-do-well criminals would had attempted to rob a gas station arrive with a couple of bullet wounds between them. Brooks has already said to his superiors he wants to remain an intern for a further year to gain more experience. When one of the two criminal patients dies, the surviving criminal, Ray Biddle (Richard Widmark), the brother of the dead man shots and claims that the black doctor killed his brother and has no right to be treating him. He blasts racist expletives at Brooks and makes his attitude towards blacks very clear. Nevertheless, Brooks is a professional and continues to treat the bullets in his tormentor.

To clear his name Brooks needs an autopsy on the dead man which he can only get from Biddle, who of course refuses. Brooks and his friend, the chief resident medical doctor, Dr. Sam Moreland (Stanley Ridges) visit Biddle’s girlfriend, Edie (Linda Darnell) where they are initially met with hostility but she nevertheless agrees to persuade him. Biddle, true to form, persuades her otherwise. In the end Edie does see how wicked Biddle is.

The language in No Way Out is even too strong for a modern audience with liberal use with the ‘N’ word and a real venomous use of the word ‘black’. Rightly, Joseph L. Mankiewicz makes no bones about right and wrong in the film. Credit has to be given to Widmark for his portrayal of the bad guy. Few actors in Hollywood film could spew such venom has he could at the time and was often very good for a wrong ‘un. Poitier on the other hand always played such parts with such dignity and grace and would repeat this in any part he played. Of course as mentioned time and again he was cast against a racist character in a changing America, none more so than against Rod Steiger’s cop in In the Heat of the Night. There is always a moment where he explodes which is still done with grace. Sadly, judging by some corners of the United States similar attitudes are still held. As Dr. Moreland says to Widmark’s Biddle: “Maybe some future autopsy will show us how you got that way.” We’re still waiting for that autopsy.

This release by Eureka Entertainment is in their Masters of Cinema series and is their third release of his films in the series following on from the previous release of A Letter to Three Wives (1948) (a film for which Mankiewicz received an Academy Award) and the recently released The Barefoot Contessa (1954). No Way Out was also made the year as Mankiewicz’s most celebrated films and arguably his best, All About Eve, which he won his second Academy Award. On the disc, to honour Mankiewicz, there is a feature length documentary on his career from 1984, All About Mankiewicz which looks at the director’s career before he retired from filmmaking in the early 1970s.