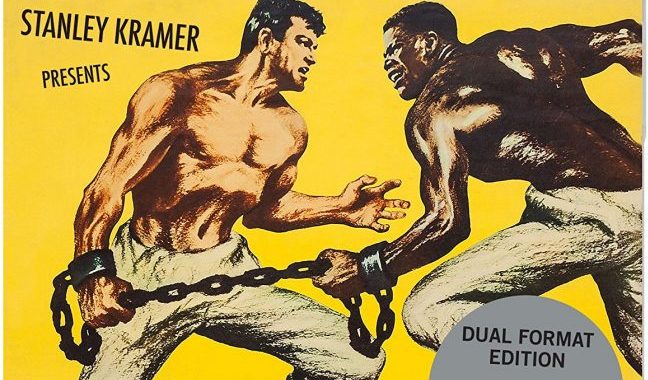 Released along with No Way Out (1950) by Eureka Entertainment, another 1950s film that tackles racism and starred Sidney Poitier is The Defiant Ones (1958). This in a very literal sense have two men, one white and one black literally tied together who find themselves as one chained and bondaged together as one. Produced and directed by Stanley Kramer, a filmmaker who had also made Inherit the Wind (1960), also recently released by Eureka! knows how to handle the action narrative. It looks very much like a 50’s films but also feels undated.

The film opens with a truck load of convicts is travelling along a country road at night. In the back there is a black convict, called ‘Coloured’ in the film (Sidney Poitier), who is annoying the warders and one of the men he is shackled to, the white Johnny (Tony Curtis) singing a black work song. The truck suddenly crashes down a bank and the two aforementioned men escape through the long grass shackled together at the wrist. Needless to say there is initial tension between the men and more than a little racist overtone. They eventually grow a mutual respect for each other and work through their problems, such as when they are stuck in the wet sided clay pit. In the film they run across a number of stock situations such as a lynch mob, a kid with an air rifle and a lonely woman.

Nevertheless, the performances throughout, from the leads and support alike are outstanding with Kramer seeming to bring out the best of all involved. It would have been so easy to make Poitier and Curtis’s characters as cliched, but the parts the actors play are nuanced and layered. Meanwhile, the supports in Cara Williams as the ostensibly single mother, Theodore Bickel as the good guy sheriff in the posse. There is also an outstanding performance by Lon Chaney Jr. as the guy who dissuades the lynch mob not to string them up and even helps them escape. It is in many an almost perfect drama that will keep the viewer entertained.

On an extra talk on the film, film historian Kim Newman passionately discusses the film in its context with other similar films, antecedents and influences as well as making note that the usual analysis of the race element is at the neglect of the bromance and even homo-eroticism of both characters. Probably at the time of the film this reading would have been a step too far. Newman’s interview is the only extra on the disc other than the trailer.