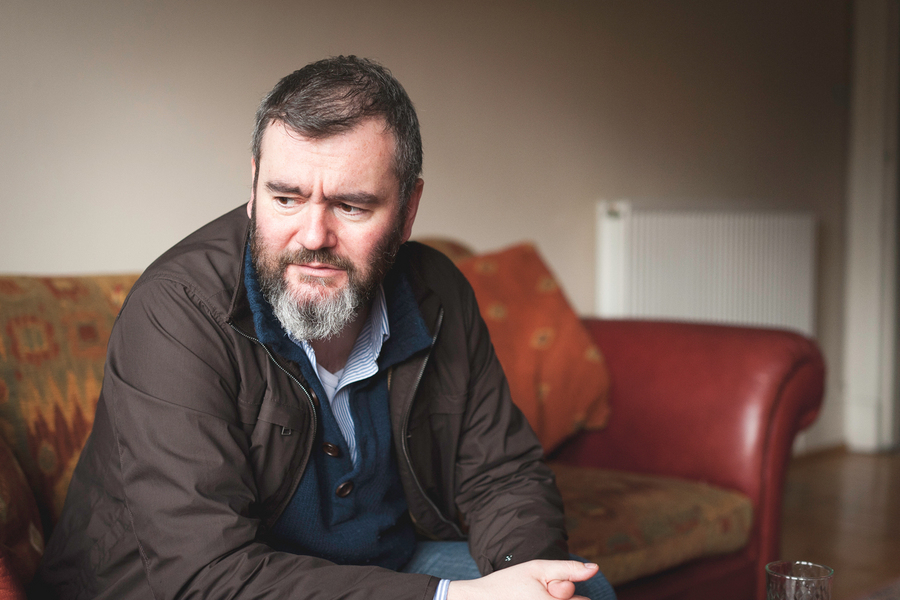 Aidan Moffat and RM Hubbert are two of the most beloved figures on Scotland’s music scene, two men whose paths have crossed many times in the past, but who had only ever musically collaborated on Car Song, a track on Hubbert’s second solo album, Thirteen Lost and Found.

The term ‘solo album’ might be something of a misnomer, since Hubbert collaborates with so many other musicians on them, it was only matter of time before Moffat and Hubbard’s musical paths would cross again, their musical interests, not to mention dark world views having much in common.

If Hubbert is much preoccupied with death, Moffat brings sex into the equation. It seems fitting that they should launch their collaborative album Here Lies the Body, in Glasgow, in the suitably solemn space of St Lukes, a beautiful conversion of an old church with splendid acoustics, given how serious the album has turned out to be. Essentially a concept album dealing with a middle-aged woman abandoning her family to rekindle the flames of a former passion in Blackpool, with pretty tragic consequences, it’s one of the best and most moving things either man has worked on. Sex and
Except tonight, understandably a little nervous about performing as a band for the first time ever (with Siobhan Wilson supplying the female vocals and cello parts, alongside Moffat’s old drummer in Arab Strap, David Jeans), they almost paly it for laughs, their banter nearly upstaging the proceedings. If either of their musical careers stalls, they could probably tour the circuit as a comedy double act.

The music however, is too good to be undermined. Opener Cockcrow, with Hubby’s ever-expressive guitar filling in with flamenco flourishes and percussive taps fingertaps on the guitar, sounds exactly what you would expect a collaboration between the two to sound like, in a good way. Introducing She Runs “as your opportunity to dance”, is underselling that track though. This goes well beyond expectations into an unsettling soundscape, with Moffat intoning a journey back through the character’s past in one of his subtlest pieces ever.

Quantum Theory Love Song exemplifies how Moffat’s lyrics can effortlessly blend the cosmic and the domestic, while Hubbert’s loping guitar work keeps it all in place. Meanwhile, Moffat’s still worrying about whether they can fill an hour’s set, and whether the people in the Gods can see his bald spot. The audience are lapping it all up; one woman shouts out, “Aidan, you’re such a DILF”, which seems to reassure him.
And they do make an hour’s set, through doing an encore comprised on Yazoo’s Only You, which Moffat pays tribute to as a “great song by a great songwriter”, and closing on their first collaboration, Car Song.
This was a richly entertaining evening – it couldn’t have gone any other way. But I’d still like to see Moffat and Hubbert do the album straight, when they’ve realised – like we all have – that it’s a work of sombre brilliance.