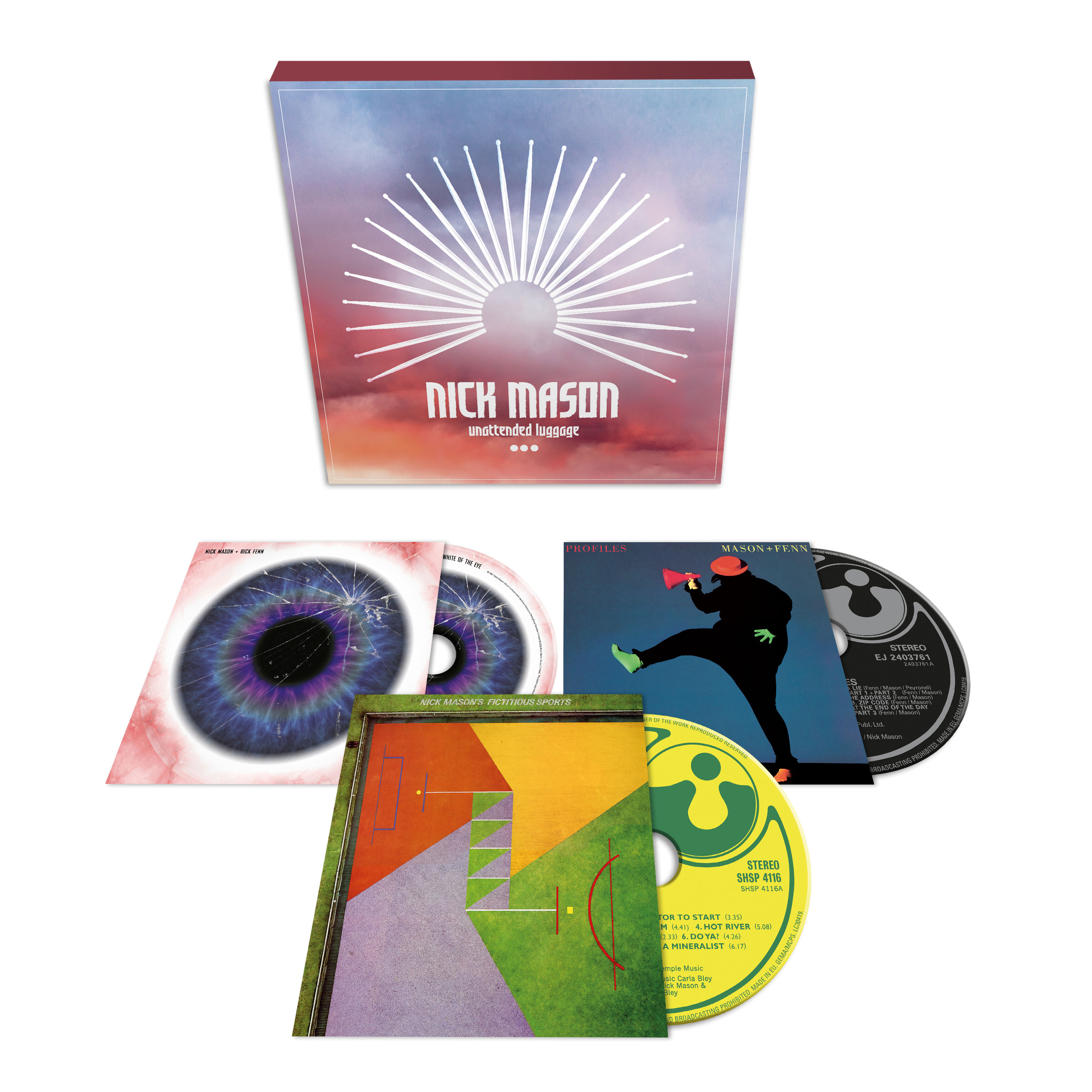 For the first time in over 20 years, Nick Mason’s, solo albums, ‘Nick Mason’s Fictitious Sports’, ‘Profiles’ and ‘White of the Eye’ will be available in both CD and vinyl three-disc boxsets. Released on 31 August through Warner Music, these limited edition box sets will be available shortly before Nick tours Europe with his acclaimed new band Nick Mason’s Saucerful Of Secrets.

Nick Mason is one of the biggest selling artists of all time. A co-founding member of Pink Floyd, he is the only constant member of the group, performing on all of their albums as well as all of their live shows. In May of this year, Nick debuted his new band Nick Mason’s Saucerful Of Secrets with four intimate shows in London (Camden Dingwalls 20 May and The Half Moon in Putney 21, 23 and 24 May) to an incredible reception.

Unattended Luggage is a further celebration of Nick Mason and his undeniably significant contribution to music. The set contains;

‘Nick Mason’s Fictitious Sports’ – Nick’s debut solo album which was originally released in 1981 and saw him collaborate with a variety of different musicians including Robert Wyatt and Carla Bley.

‘Profiles’ – A collaboration with 10cc guitarist Rick Fenn, it was Nick’s second album outside of Pink Floyd and was released in 1985 as ‘Mason + Fenn’. This is a mainly instrumental album except for tracks ‘Lie for a Lie’, which features vocals from Maggie Reilly and former bandmate David Gilmour and ‘Israel’, sung by UFO keyboardist Danny Peyronel.

‘White of the Eye’ – A soundtrack for a British thriller movie of the same name, Nick once again collaborated with Rick Fenn. Originally released in 1987, in conjunction with the film’s release, this is the first time the record has been made available for over 20 years, and the first time it will appear on CD.

Nick Mason says, “These recordings hold a very special place for me in my musical life. ‘Fictitious Sports’ developed initially from working with Mike Mantler, Carla Bley and Robert Wyatt on a couple of their projects, and benefited enormously from a whole crew of great musicians that I was introduced to by them at Grog Kill Studios in Woodstock.

“’Profiles’ and ‘White of the Eye’ were an extension of working with Rick Fenn on some advertising and short documentary film soundtracks, which then developed into something more.

“Listening back after 30 odd years, I’m delighted they are getting the reissue treatment. I’m rather hoping that sales will be sufficient to damage the market in the original rare vinyl versions!”

Unattended Luggage will be available in both CD and vinyl three LP boxsets. Pre-orders are available from https://lnk.to/NickMasonULMP.

The individual albums ‘Nick Mason’s Fictitious Sports’, ‘Profiles’ and ‘White of the Eye’ will all be available as a download and through streaming platforms.

Nick Mason’s Saucerful Of Secrets will be touring through Europe in September. Tickets are on sale now from www.thesaucerfulofsecrets.com.