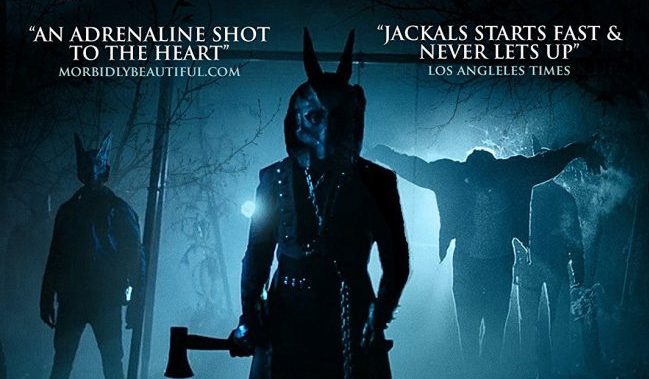 The opening titles of Jackals (2017), the latest home invasion horror thriller, tells us that it is March 1983 and is “inspired by true events”. We’re not really fooled by these being told that the tale is based off a true story anymore, but gives that element or sub-text of an underbelly of Americans involvement in cults. The Manson Family and Sharon Tate murders are among the most popular telling of real-life home invasion, most recently realised with House of Manson (2014) and Wolves at the Door (2016) and another in the pipeline, Once Upon a Time in Hollywood.

Jackals opens with a P.O.V. shot of a figure breaking into a house. He wanders round the house until he comes to a bedroom and murders the couple within. He enters a girl’s room, she wakes and clearly knows him. Seeing blood on his, she screams “What have you done?”, and is herself murdered. After the credits we next visit a couple of teenage men driving and listening to death metal when suddenly they have a blow-out. A vehicle of pulls up alongside when a couple of hooded figures violently beat the teenagers up, leaving one at the side of the road and the other bundled into the vehicle. We learn that the teenage son, Justin (Ben Sullivan) had been a runaway and the family have turned to extreme methods to get him home and away from a cult gang.

Our sympathies were kind of with Ben up until we realise what a freak he is. The Powell family had hired a special agent (Stephen Dorff) to do the rough stuff. Ben is tied to a chair and insists that his name is no longer Justin but Thanatos and that his ‘real’ family will come to get him. Needless to say the family are torn between their love for Ben and their hatred for what he has become. The mother (Deborah Kara Unger) is naturally particularly torn. That evening, Ben still tied up, his ‘family’ arrive and begin to lay siege to the house. It starts to get sinister when the gang, all dressed in animal masks start to attack, with the rest of the film devoted to the family under siege.

Jackals, while fairly standard home invasion horror, a staple sub-genre in horror since Last House on the Left (1972) has its moments. In that sense this new film is not much different with its chief difference being the home invaders being a part of a cult family, similar to the aforementioned Manson Family. The addition of them wearing jackal, rabbit and other masks gives the attackers or ‘family’ a greater sinister appeal. But again this is not original, despite it being effective. Recent similar films including The Strangers (2008), You’re Next (2011) and The Purge films are similar examples. There are some genuinely shocking and violent shock scenes in Jackals while Dorff’s character offers little with the real battle going on being that between the struggle the family, consisting of mother, father, brother and girlfriend of Justin and their baby (adding further vulnerability).

Released by 101 Films, there are no extras on the disc.