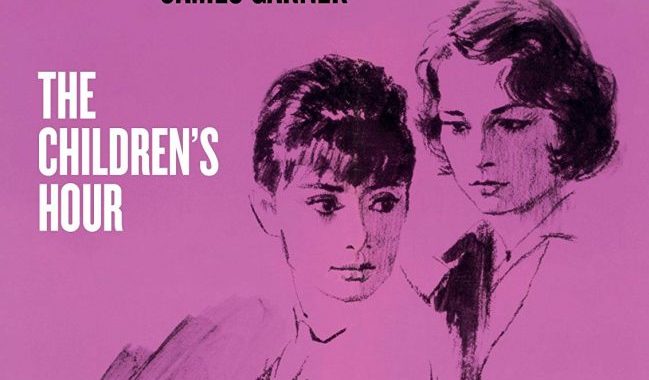 Pride is with us again this month and is celebrated and marked by the LGBT community this time every year. For anyone who is gay, bi-sexual or believe they are not the gender they were born with, ‘coming out’ is a big deal; in this country homosexuality was legalised 51 years ago and much later in the USA, as late as 2003 in Texas when the sodomy law was dropped. In such conservative communities one way to condemn someone is to suspect and spread the rumour that someone is gay. The Children’s Hour (1961) was based on the 1934 play of the same name by Lillian Hellman. The play itself was based on a true story that took place in Scotland in 1809 when a school child accused her two teachers of being lesbians.

The story is transposed to modern day America and is believable in how a rumour of this kind could bring down respectable understanding citizens in the community. In the film, two old friends have opened a private girls school. They are Karen Wright (Audrey Hepburn) and Martha Dobie (Shirley MacLaine). Karen has been engaged to a doctor, Joe Cardin (James Garner) for some time. The younger cousin to the doctor, Mary (wickedly played by Karen Bilkin) is a bully, spoilt and a manipulative child who is looked after by her grandmother, Mrs. Tilford (Fay Bainter). Mary is bullying another student, Rosalie (a young Veronica Cartwright who would later star in Alien, 1979 and The Witches of Eastwick, 1987). When Mary tells her grandmother that Karen and Martha have an “unnatural relationship”, she is pressed and builds on the lie. Its not long before the rumour is spread that the two teachers and friends are in an “unnatural relationship”. All the girls are taken out of school, Joe loses his job by association and all three are alienated by the local community.

Directed and produced by William Wyler, this was the first film he made since his huge success with Ben Hur two years before and couldn’t be more different. Although Audrey Hepburn has had plenty of serious roles throughout her career, it’s unlike any other role she has played given the subject matter. Added to this was the Production Code, still in place in 1961 (it was abolished in 1967) which suppressed sex and certainly drove Hollywood’s moral stewardship between the 1930s and 1960s. Homosexuality as subject matter, never mind a film daring to have an opinion on bigotry, was rare and only ever suggested rather than said directly. Yet it avoids the more uncomfortable conversations taking place from a distance. The Children’s Hour was made the same year as a British film that dealt with a politician being blackmailed for being homosexual, Victim starring Dirk Bogarde. Both handle the same subject matter quite differently.

It is not only Hepburn that pulls out the acting stops. We are not used to seeing James Garner (whether as Jim Rockford or not) in high drama performances, but here he is. It does seem a little like bathos in places, but nevertheless delivers an enjoyable and human performance. MacLaine, on the other hand, is no stranger to vulnerable roles and without giving too much away pulls it off again with The Children’s Hour.

Surprisingly for a BFI release it is a little bereft of extras, but has an engaging commentary from film historian Neil Sinyard and is the first time the film has been released on Blu-ray. The picture has some grain to it, nicely presented in High and Standard Definitions.