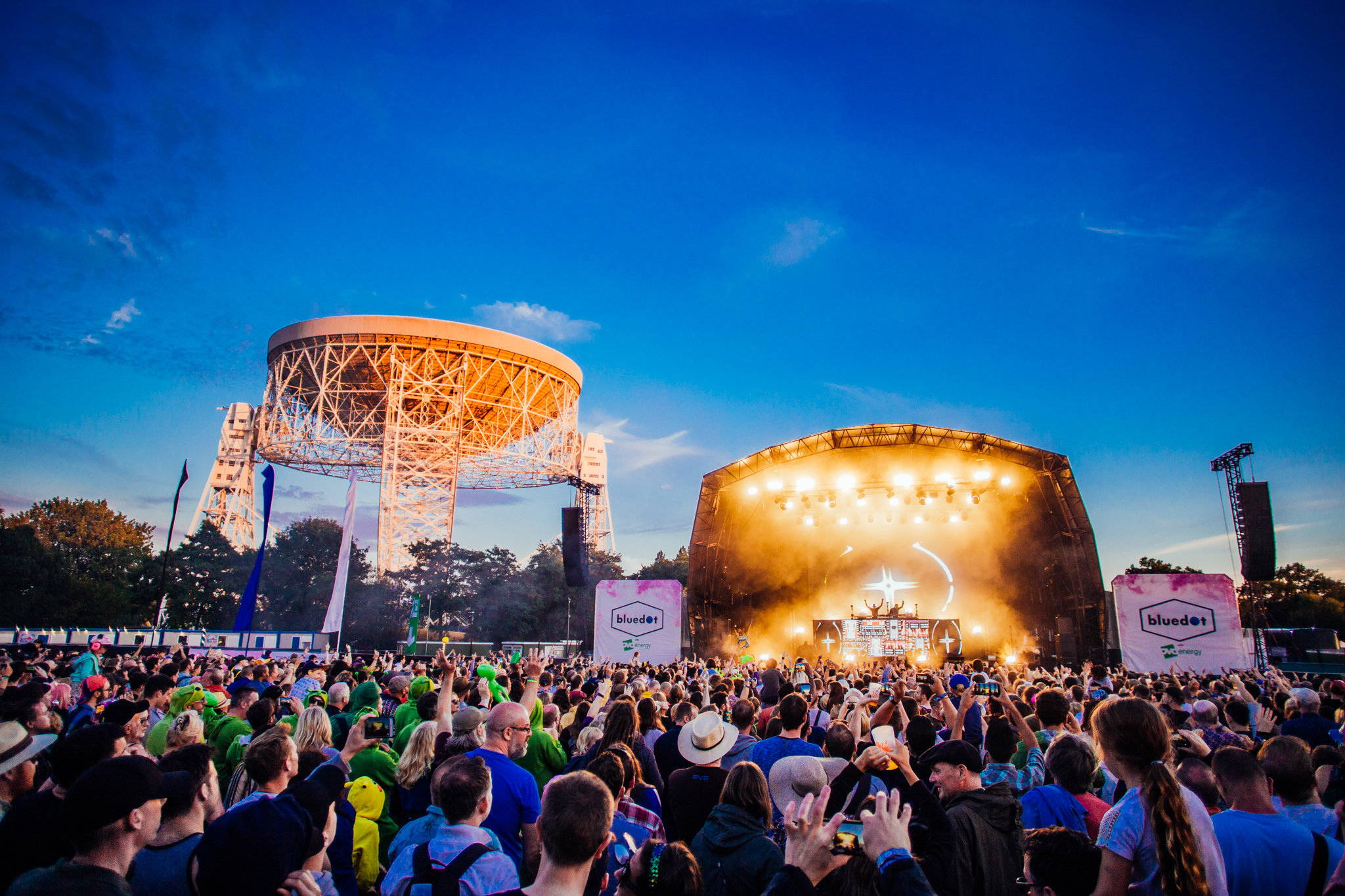 Award-winning festival bluedot returns to the incredible Jodrell Bank Observatory, home of the iconic Lovell telescope, for a weekend of deep space discovery and superlative sounds. A truly stellar line-up of music featuring 2018 headliners The Chemical Brothers, The Flaming Lips and Future Islands compliments a ground-breaking programme of live science experiments, expert talks, and immersive artworks, this year focusing on our planet’s need for a more sustainable future.

Year on year, bluedot works closely with Jodrell Bank to explore sustainability, both within the festival and beyond. From being one of the first festivals in the UK to use all LED festoon lighting in the inaugural year, to using a vast 15 acre wildlife refuge as the festival’s home, both bluedot and the team at the Observatory work hard to reduce waste and minimise the festival’s carbon footprint, and continue their mission ‘to highlight the fragility of planet Earth.’

A true titan in bringing environmental issues to the fore, bluedot are excited to present a very special performance of Blue Planet in Concert from the world famous Hallé Orchestra on the Thursday night. Conducted by Ben Foster, the concert will combine stunning HD footage from the original Blue Planet 2001 television series with the original soundtrack performed live, exploring the vast oceans on our pale blue dot and the environmental challenges they face. Kicking off the brand new four-day format in style, this remarkable performance will set the theme for the weekend, celebrating the beauty of nature while highlighting the importance of protecting it.

Added today, and opening the Thursday night ahead of the Blue Planet in Concert is a very special discussion from the British Antarctic Survey. Bird ecologist Dr Lucy Quinn and BBC Natural History TV producer Yoland Bosiger will take to the stage for an enlightening and eye-opening Q&A session, focusing on how BBC’s Blue Planet II made plastic in the oceans a global issue.

With science, art, and culture at the heart of the bluedot experience, the sustainability theme runs throughout the weekend’s programming, with a DotTalk from professor of Climate Impacts Richard Betts, and the Future Now series which will raise important questions about the future of our planet. Rebuilding: Future Cities will shed light on the importance of creating sustainable living through design, while live science shows such as Operation Earth and exhibitions in Mission Control such as Ocean Science, Society and Robots will educate audiences young and old on climate change.

Elsewhere over the weekend, playwright David Windass and director Andrew Pearson will bring their Pale Blue Dot Theatre Production to the festival. Set on a dystopian planet turned on its head by an eco-disaster, it offers an eye-opening look at what could be in-store for humankind. Another area of the festival, the Planet Field, focuses on ‘Spaceship Earth’ and the ways in which we look after the only planet we can call our home. Located in The Arboretum, discover the latest thinking and innovation in how researchers and scientists are working to protect our pale blue dot, and catch exhibitors such as The Carbon Impact of our Lifestyles and Practical Action.

Also appearing over the bluedot weekend are Associate Director of the Jodrell Bank Centre for Astrophysics Tim O’Brien, Tamsin Edwards (lecturer with the Open University in Environmental Sciences and a defining voice in the climate change debate), and Alice Eldridge (cellist, researcher and educator who brings her ‘Learning to Listen to Biodiversity’ to bluedot this year). Dr. Sheena Cruickshank (Senior Lecturer in Immunology at the University of Manchester) will also join guest speakers, along with discussions from writer and broadcaster Professor Alice Roberts, physicist and engineer Libby Jackson, biologist and conservationist Professor Dave Goulson, astronaut Suzie Imber and astronomer Stephen Wilkins.

In the spirit of bluedot’s remarkable depiction of our need to embrace a more sustainable future, organisers have adopted a number of new initiatives, and are continuing a whole host of efforts from last year, to ensure the show is as eco-friendly as possible.

We offer our audience a chance to offset their carbon footprint with a choice to make a ‘Carbon Offset’ donation when they buy their tickets. We invest 100% of this in renewable energy with Energy Revolution, a festival industry collaborative charity

Removing the use of plastic straws, plastic containers and plastic cutlery sold from food traders

Offering tent collections for charity and an onsite local food back collection.

Campsite crew are on hand to encourage campers to recycle correctly with recycling bin bags, keeping our campsites clean and removing all tents when the festival has ended