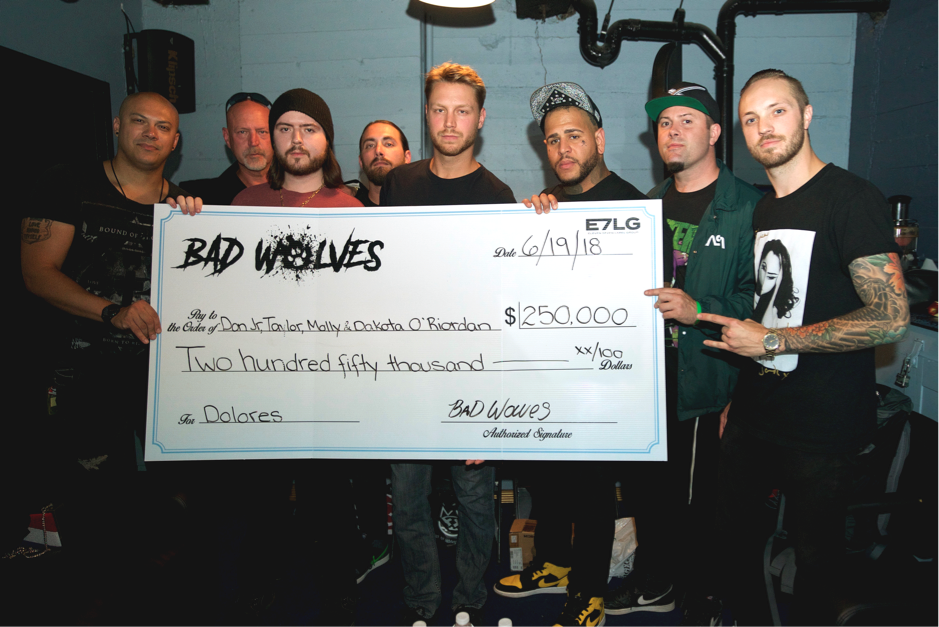 At a sold-out Gramercy Theatre in New York City, Bad Wolves presented a $250,000 check to Dolores O’ Riordan’s family onstage prior to a performance of ‘Zombie’. O’Riordan’s two sons, Donny Jr. and Taylor Burton, alongside their father, Don Burton, were presented with the gift in an emotional moment. The cheque was also accepted on behalf of their younger sisters, Molly and Dakota Burton.

O’Riordan was set to record her iconic vocals on the track on the day of her tragic passing. In advance of their debut album, Disobey, the band released ‘Zombie’ as a single, with the commitment to bestow their proceeds to her four children. The unprecedented global success of ‘Zombie’ lead to the raising of $250,000, with a promise for more.

“Our sadness the day Dolores passed was nothing compared to that of her children and her family. In light of the tragedy, donating our proceeds to her children was the only thing that made sense. The ultimate goal is to present them with a $1,000,000 cheque – and the fact we’re a quarter of the way there is beyond incredible,” reflects Bad Wolves frontman Tommy Vext. “The connection that people have to this song, the stories, the memories and the kids who are hearing this song through Bad Wolves for the first time – it’s a true testament to the timelessness of their mother’s songwriting that will live on forever, and we are so grateful to be able to do this for them.”

The band have also released the new video for ‘Remember When’, which was directed by Wayne Isham (Mötley Crüe, Avenged Sevenfold, Megadeth) and is the third single released from the band’s debut album, Disobey.

The powerful music video relays the story of frontman Tommy Vext’s relationship with his twin brother. “My twin brother is currently serving 17 years for attempted murder — [he] tried to kill me during a home invasion when he was high in 2010… [Testifying against him] was definitely one of the more difficult moments of my life,” Vext reflected in a recent interview with Kerrang!. “‘Remember When’ kinda goes through a timeline and highlights two people who lived the exact same life and had the exact same hardships and advantages and disadvantages, and who we are ultimately as adults is defined by the choices that we made, and our lives reflect those choices.”

The debut album has had a consumption of over 21,000 units in the first week and debuted at #22 on the Billboard Top 200 chart, #8 on the Top Current Albums chart, #2 on the Hard Rock Albums chart and #4 on the Rock Album charts.

Their cover of ‘Zombie’ has been certified Gold in the United States and Australia, as well as gaining Platinum status in Canada. The track has topped charts worldwide, including the U.S. iTunes overall and rock charts, Billboard’s Mainstream Rock Songs chart, Spotify’s Global Viral 50 chart, while also reigning atop the Active Rock radio chart for three straight weeks. Bad Wolves have also earned the #1 spot on the Billboard Emerging Artists chart. Additionally, the single has been planted atop the iTunes Metal chart in the U.K. and Germany for five straight months. The official music video, a tribute to O’Riordan and an homage to the original, has garnered over 125 million views across platforms.

Bad Wolves will be touring extensively throughout the rest of 2018, with the What’s In Your Head tour continuing through July 6th with label mates From Ashes to New and special guest Diamante. They will also be joining Five Finger Death Punch, Breaking Benjamin, and Nothing More on their massive amphitheater tour this summer.