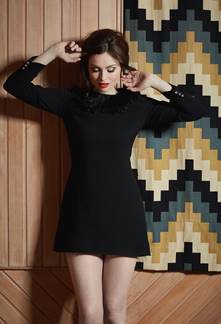 Sophie shot to fame as a vocalist on Spiller’s huge number one single Groovejet and then followed it up with Take Me Home and her worldwide smash hit, Murder on the Dancefloor.

Her solo debut album, Read My Lips was released in 2001 and reached number two in the UK Albums Chart and certified double platinum by the BPI. The album sold more than 2 million copies worldwide. Her subsequent album releases include Shoot from the Hip (2003), Trip the Light Fantastic (2007), Make a Scene (2011).

In 2014, in a departure from her previous dance pop albums, Sophie embarked on her debut singer/songwriter album Wanderlust with Ed Harcourt at the helm as co-writer and Producer. It proved to be a critical and commercial success: certified Gold in the UK and spending 3 weeks in the UK top 10 album chart and spawning the hit single Young Blood.

Sophie followed this release and collaboration up with 2016’s Familia which saw her return to the dance floor with the radio hit Come With Us. In the Spring of 2018 with Ed Harcourt as Producer and Amy Langley (of Dirty Pretty Strings) arranging, Sophie will release orchestrated versions of all her hits and past single releases.

Liverpool Pride Festival is the region’s established annual celebration of all things LGBT+, and this is the ninth consecutive year the festival has been staged. This year’s event takes place across two days – Saturday 28 July and Sunday 29 July 2018. The festival is free to attend.

Liverpool Pride has grown to become one of the city’s major annual events, last year a record 8,000 people joined the march and over 50,000 festivalgoers enjoyed two days of entertainment to celebrate lesbian, gay, bisexual and transgender communities.

The festival goes back to its historical roots on its ninth annual year. Tithebarn Street in the city centre is the main festival site on Saturday 28 July. Organisers believe this year’s location will prove popular with festivalgoers given the close proximity to the city’s Gay Quarter and nearby Pownall Square, the site of Mersey Pride in 1995.

Liverpool Pride’s #AllTogetherNow theme will also complement a city-wide season of events and performances to mark #Liverpool2018 – marking 10 years since the city was named European Capital Of Culture 2008.

The Liverpool Pride Festival 2018 marks a decade since the death of gay teenager Michael Causer, who lost his life on 2 August 2008 after a vicious homophobic attack.

Saturday’s festival programme will focus on the area round Tithebarn Street, which will be closed between the Superlambanana and Moorfields to ensure the festival takes place in a safe and controlled environment.

Live performance starts in the lead-up to Liverpool Pride with The Ruby Slippers comedy play, which runs at the Royal Court Liverpool from 24 – 28 July. Set in a Blackpool drag club, Ruby Slippers is a riot of fun and laughter, featuring Liverpool actor Kurtis Stacey and much-loved drag queen Divina de Campo.

Live theatre continues with Grin Theatre: Queertet 2018 at The Casa on 26 and 27 July. Featuring two new plays and two updated productions from the Queertet catalogue,

Pride at The Pictures features two films – All About My Mother at Picturehouse at FACT on 23 July; and Brazilica LGBT Film Night featuring Divine Divas at the Output Gallery, Seel Street, on 30 July.

Tate Exchange will host Liverpool Pride: Producing Equality. Between 16 and 22 July, Pride Volunteers will be on hand to demonstrate the excitement and commitment with which people across our region create a Pride festival. Art banners from Oliver Bliss, Brian D Hanlon, Sophie Green and Ben Youdan will be on display, with an opportunity for visitors to create their own through workshops.

Come Out of the Shadows returns for a third year, when buildings across Liverpool and the surrounding areas are illuminated in Rainbow colours between 19 July and 2 August to challenge hate crime and show their support for LGBT+ communities.

The fun continues Sunday 28 July with Liverpool Pride Sundae and the #AllTogetherNow Community Zone. The Youth & Community Zone returns with festivalgoers’ favourite market and information stalls, as well as an Acoustic music stage programmed by We Want Women and Grin Theatre with input from youth groups GYRO, The Action Youth and Wirral Work It Out.

Family day Pride Sundae’s hub at The Bluecoat will feature dance, arts and craft activities, food market, and barbecue in the Bluecoat Garden, alongside Pride events at the International Slavery Museum, Walker Art Gallery, Museum of Liverpool and Liverpool Cathedral.

This year’s theme is #AllTogetherNow, which encompasses every branch of the LGBT+ and wider communities coming together no matter what their ethnicity, gender, sexuality, belief or however they define themselves in celebration of equality and diversity.

Liverpool Pride Festival is proud to be working with headline sponsor Barclays; sponsor Manchester Airport; Homes For Everyone; Mayor of Liverpool and Media Partners Radio City and DIVA magazine.