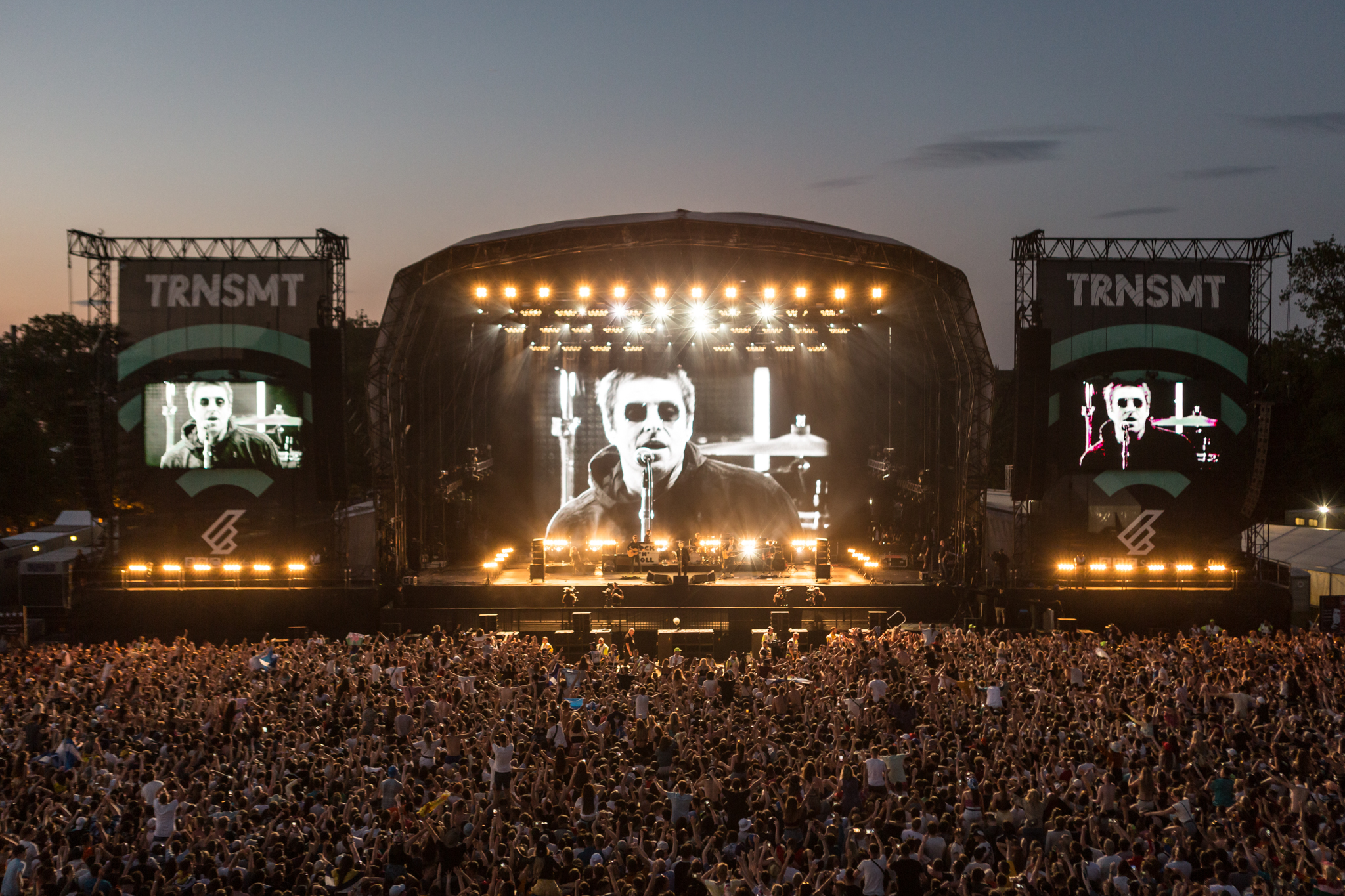 Tens of thousands of music lovers once again flocked from across the world to a sold out Glasgow Green for day two of Scotland’s biggest music festival, and as TRNSMT fans bathed in glorious temperatures – with Glasgow reaching higher temperatures than Madrid – it was hot, hot, hot both on and off the stages.

Kicking things off on the Main Stage were Glasgow’s very own The LaFontaines, who braved planes, trains and automobiles to make it to TRNSMT, and what a welcome they received. Frontman Kerr Okan had the crowd on his side from the first note as the band made their second consecutive appearance at the festival.

Kerr Okan addressed the crowd saying: “Glasgow you look so good in the sunshine! Thanks for watching us, you are part of this band!”

From the new kids on the block to some true icons, Shed Seven took to the stage basking in the afternoon sun, bringing with them hits including ‘Disco Down’ and ‘Going for Gold’. Performing a cover of Stone Roses ‘I Am the Resurrection’ as the sun shone down on the packed crowd, it was a truly epic performance from start to finish.

Next up, Krept x Konan, the London-based hip-hop duo who have seen a gradual rise to prominence over the last few years. Taking to the Main Stage they brought a huge influx of energy, working the stage and the crowd effortlessly.

Possibly the most anticipated performance of TRNSMT’s first weekend was Gerry Cinnamon’s Main Stage set. Just one year ago the local lad took to the King Tut’s Powered by Utilita Stage, but there was only one stage for him in 2018. What unfolded was nothing short of unbelievable as thousands of fans displayed their utter adoration for the one man show; he belted out a set that left them in a state of pure euphoria. With just an acoustic guitar and a smile on his face, the singer-songwriter from Castlemilk played his heart out, and the TRNSMT fans returned the love ten-fold.

Gerry Cinnamon: “Got a wee tear in my eye already. This might never happen again, so remember it TRNSMT!”

Fans over on the King Tut’s Powered by Utilita Stage were also treated to a strong line-up of both promising and established acts throughout the day, including openers The Night Café, BAS, The Academic, Scottish natives The Snuts and Kyle Falconer, who provided an insight into his upcoming solo album.

Ramz and IAMDDB continued the party into the early evening, before The Sherlocks closed proceedings with their straight-down-the-line indie sound.

As the evening rocked on, Wolf Alice’s set was one to remember with their huge hits such as ‘Silk’ and newer material including ‘Don’t Delete the Kisses’ the band showed why they are such a huge fan favourite at every festival they grace. As their atmospheric set ended and fans continued to pour into Glasgow Green’s Main Stage area, it was time for the indie powerhouse that is the Courteeners to make their mark on the Main Stage.

Arriving a week early, fan-favourite Lewis Capaldi – set to return to the Main Stage on 8^th July -, enjoyed sets from bands including The Snuts and Kyle Falconer. Isaac of punk band Slaves mulled around backstage playing tunes in the Guitar Guitar pop-up in the Glasgow sunshine. Also spotted around VIP were Josh Taylor and Trainspotting hero Robert Carlyle who returned for a second year! And AC12’s own Martin Compston joined Kyle Falconer for a TRNSMT TV Live broadcast.

Ten years on from the release of their, now iconic, debut album St Jude, Courteeners proved why they are just as important to the UK music scene as they have ever been, as Glasgow Green moved in unison to tunes like ‘Not Nineteen Forever’, ‘Notion’ and ‘Cavorting’. As the last notes of their set rang out, frontman Liam Fray took a moment to dedicate their final song to the man who inspired him to pick up a guitar and begin crafting lyrics many years ago. With a final bow, Courteeners made way for the one and only rock ‘n’ roll star…

Liam Fray, Courteeners said: “You’ve made this feel like a second home for us!”

As the SUNSHINNNNNE went down on Glasgow Green the swaggering silhouette on the Main Stage could be one man only. Liam Gallagher was welcomed onstage by an utterly magnificent roar, as the crowd of adoring fans watched in awe as one of the most recognisable and well-loved figures in British music composed himself to start. The first notes of Oasis classic ‘Rock n Roll Star’ echoed through the Green and the TRNSMT crowd went wild.

Liam Gallagher said: “So this is the famous Glasgow Green then? I’ve heard a lot about it.”

From beginning to end Liam Gallagher’s headline performance documented his 25-year career as one of the country’s most popular figures, with solo tunes such as ‘Wall of Glass’ and ‘Greedy Soul’ tucked between Oasis classics such as ‘Morning Glory’ and ‘Wonderwall’.

Geoff Ellis, Festival Director said: “Today has had so many highlights; from the mass Shed Seven singalong to the absolute class of Liam Gallagher’s set. One of the biggest moments for me was watching local boy Gerry Cinnamon completely command the Main Stage in front of his biggest ever crowd. This felt like a real tipping point performance that people will be talking about for years to come. A future TRNSMT headliner was born.”