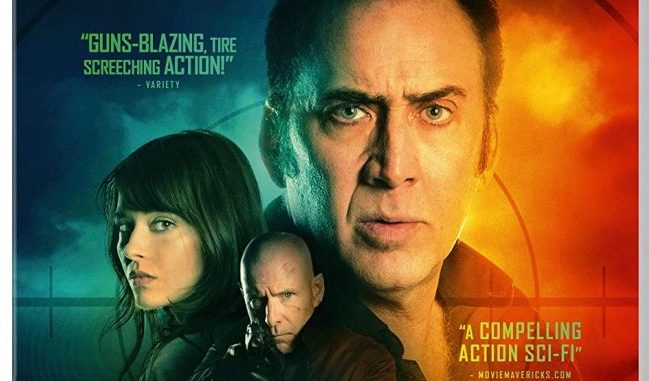 For quite a few years now generally the films of Nicolas Cage have been made direct to DVD or given a very limited release. That does not necessarily mean that these films are worse than the films that do get general release. Consider the Ghost Rider films, the dreadful Hollywood remake of The Wicker Man (2006), the National Treasure films or Knowing (2009). These are all duds, either critically or at the box-office with a very big fantasy element, making Cage something of a fantasy star as well as an action and indie star. The Humanity Bureau (2017) is such a film that saw a very limited release but actually defies its limited release pretensions.

It is a dystopian post-apocalypse action drama that has something of a moody undertone. Now in his mid-50s, Cage is still able to play the quirky romantic hero. Set in about 2030, here he plays the worn out Noah Cross, a relocation enforcer who assess and audits people’s lives before they are deported to a resettlement location called ‘New Eden’. The world and the United States has a water and food shortage following a devastating war. Anyone who refuses to come quietly he must use tough measures to ensure that they comply, even if on occasions that means armed response.

Kross shares some doubts he has with his ‘friend’ and boss, Adam Westinghouse (Hugh Dillon), who ideologically follows orders unquestioningly. Kross suspects that New Eden is not as he has been led to believe but and is in fact an extermination facility. He learns through a secret contact that his worst fears are realised. His next assignment is to a woman who lives alone with her 11-year-old son in a home in a dustbowl. They are Rachel and Lukas Weller. Once he has audited them, Kross confirms that they are to be evacuated the next day. She protests saying that Lukas has a concert recital at school. Instead he returns the next day to help her escape, warning her that it will be deadly for her to stay and dangerous to go on the run and make their way to Canada. Naturally Westinghouse is on their trail.

It would not be unfair to state that there are a lot of politics at play in this film. The plot never really explains what happened, only that there was a nuclear disaster, the United States is largely a police state and millions of people have been killed. Some of the most important commodities are water and fresh food, but for those in the city such as Kross they have water readily available while he even has an original Monet hanging on his wall at home. The film is Canadian and there are plenty of pointed criticisms towards Trump’s America, or at least a vision of how Trump’s America could turn out: there is a large wall around the whole of the USA, environmental disaster, control, camps and extermination. Far from being the land of the free. Canada, meanwhile, seems like some Shangri-La that is difficult to get to and where the protagonists dream of escape. In that context it is an interesting film despite the heavy villain resembling Mark Strong in Dillon’s Westinghouse, while Cage avoids some of the heavy handed performances he has become known for of late. There are no extras on the disc other than a trailer.